If you had the pleasure, or lack thereof, of growing up in the ‘80s, or otherwise living through it in any conscious way, you might have noticed the greed, the drugs, the bad hair; you might have suffered its emptiness, its shallowness, its jolly braincrazy actor/president whose jokes about nuclear annihilation cheered a nation; you might have, like me, watched every single movie that played anywhere at all, and noticed that quite a few of them did not, shall we say, live up to expectations (ewoks, I’m looking at you). 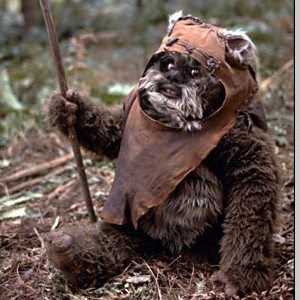 I think everything’s going to work out just fine, you guys

The ‘80s wanted to please, they wanted to make up for all those dark, depressing movies of the ‘70s, not to mention the dark, depressing times themselves. Problem was, the ‘80s veneer of cheer, of wealth, of cocaine, of Arnold Schwarzenegger movies and Madonna songs, was just that: a veneer. Underneath it something sinister lurked. Not that something sinister isn’t always lurking. That’s what sinister things do. But the more we pretend the world is nothing but sunshine and rainbows, money and cars, reckless abandon and happy endings, the larger the sinister underbelly grows, and the larger it grows, the more it eats away at us, piece by piece, until, ever insisting that there’s NOTHING WRONG AT ALL EVERYTHING IS FINE GO AWAY I’M HAVING SO MUCH FUN, we’re consumed by darkness.

Which is when we start hacking people to bits and showing off our new business cards. Or at any rate, imagining we are. Are we only imagining it? AHHHHHHH!

For this week’s Mind Control Double Feature, we travel deep down inside our own heads to find the evil lurking within, an evil we call: The 1980s. 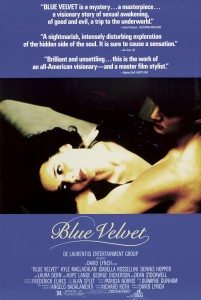 What am I going to say about Blue Velvet that hasn’t been said? You have seen Blue Velvet, I trust? It’s time to see it again. Blue Velvet is the best American movie of the ‘80s. Which yes, it’s crazy to name one movie the best of a decade, but whoever said we weren’t crazy around here?

It’s hardly original to go around saying a David Lynch film is “dreamlike” or “nightmarish,” but it doesn’t have to be original to be true: Blue Velvet is a nightmarish dreamworld of America in the ‘80s as seen through eyes of an insect living in the ‘50s. Ha! I bet no one ever said that before.

It begins with an ear. In a field. Crawling with ants. No, wait, it begins with a blue sky and a white picket fence and a man with a hose watering roses. Suddenly he falls to the ground, writhing, and the camera dives beneath the perfect lawn to find chittering black insects squirming beneath it. The metaphor of the movie. Why does Jeffrey (Kyle McLaughlin) find an ear? Lynch:

It had to be an ear because it’s an opening. An ear is wide and, as it narrows, you can go down into it. And it goes somewhere vast.

Jeffrey finds the ear. The camera plunges down into it. Not until the end of the movie does the camera pull back out of an ear. We’re inside the ear in Blue Velvet. As David Foster Wallace memorably put it: 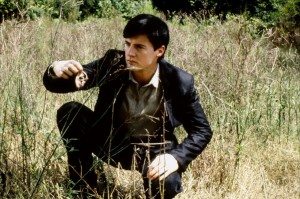 The ‘50s song “Blue Velvet” by Bobby Vinton and the image of finding a severed ear. These were the two elements that began Lynch thinking about the movie. Next was the idea of sneaking into a girl’s room to watch her, and finding a clue to a mystery. Lynch wrote numerous drafts of the script he later described as horrible. When he wrote the draft that would become the movie, he didn’t have an ending. Not until he dreamed it. Lynch:

Didn’t Lynch dream the ending to Mulholland Drive too? No wonder his movies are dreamlike. Lynch defies those seeking symbolism. Blue Velvet doesn’t just contain a subtext, it is subtext. The subtext is the text. It’s all right there in front of you. Asking what it “means” feels redundant. Lynch sums up Blue Velvet thus: “It’s like a dream of strange desires wrapped inside a mystery story.” Exactly.

it’s a beautiful world we live in

How did this dream of strange desires come to be? After making the uniquely awesome Eraserhead (Kubrick was a huge fan; he screened it for people all the time) Lynch was hired to direct The Elephant Man. Word has it after that he was asked by Lucas to direct Revenge of The Jedi (as it was then known). Lynch turned Lucas down, but accepted Dino De Laurentiis’s offer to direct Dune. Dune did not turn out well. It has its moments, but it’s something of a disaster. It fared poorly at the box office. And then, who knows why, Dino gave Lynch a deal: a tiny salary, a six million dollar budget, make anything you want, he said, you’ve got final cut. So Lynch made Blue Velvet.

you are so fucking suave

Dennis Hopper is Frank, the madmen who’s abducted the son of singer Dorothy Vallens (Isabella Rossellini). He wears an oxygen mask at key moments. Making him look like a big bug. Jeffrey pretends to be an exterminator to get into Dorothy’s apartment the first time. There’s a man identified by his yellow jacket. I like a movie with insects crawling around its edges. (Maybe we should have paired this with Naked Lunch?) 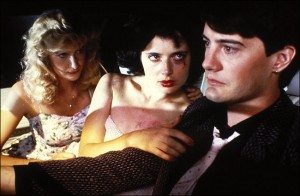 most uncomfortable car ride of all time?

Jeffrey’s got a sort-of new girlfriend in Sandy (Laura Dern). She’s scared of what he’s doing, yet helps him anyway. It’s like she’s pushing him to do the thing she wishes he wouldn’t. It’s an interesting dynamic. Sandy has a dream of robins saving the world. When she relates it, at first you want to laugh, it’s just too corny. But she keeps going. It’s real for her. It’s not corny at all. I feel like people misread Lynch at times, imagining he’s mocking small town life, or American life altogether. I don’t think it’s mockery at all. I think it’s love. He loves the purity of the dream of the robins. It’s a dream only an American could have. 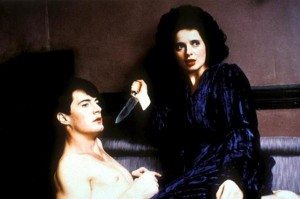 sex is funny sometimes, isn’t it?

Blue Velvet isn’t about the ‘80s, per se. It’s not commenting on the political or social ills of the times, at least not directly. And yet, somehow, Blue Velvet is the ‘80s. Neither of its halves—the too perfectly charming town and its dark criminal underbelly—is real. Both are warped dreamscapes. They’re warped versions of America midway through the ‘80s. When the ‘80s dreams, and when its dream gets scary and fucked up, that dream is Blue Velvet.

There are only a million other things to say about the movie. I haven’t even touched on the music and the sound design, essential elements in Blue Velvet. Nor any word on the insane acting, or the amazing cast that includes Dean Stockwell, Jack Nance, and Brad Dourif. Suffice to say, Blue Velvet goes deep into the ear. It’s Lynch’s best film. 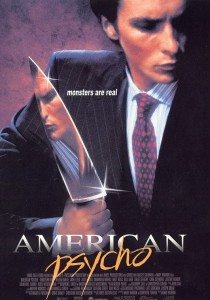 When I re-watched American Psycho recently for the first time since ‘00, I loved it. I came out of the theater saying, “This movie is the single greatest evisceration of the ‘80s ever made.” I’d barely registered it when I saw it originally. Maybe I needed time to reflect, maybe I still needed to get over having lived the ‘80s, maybe I needed twenty years to wake up from the dream.

It’s based on the book by Brett Easton Ellis, which I admit I’ve never read. At the time it sounded awful. An investment banker in Manhattan in the ‘80s hacks up prostitutes and other unlucky souls while snorting cocaine and arguing with his friends about pop music, fasion, and etiquette. Marvelous. 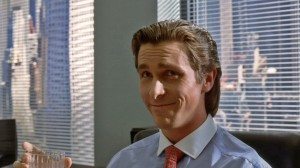 he’d love to chat, but he’s got some videotapes to return

Based on the movie writer/director Mary Harron made out of it, who knows, maybe the book’s incredible. It’s an incredible movie. It’s too perfect. Christian Bale plays his character like an alien visiting another planet, trying to make sense of these people and fit in. He uses all the right products, listens to all the right music—Huey Lewis and Whitney Houston in particular, his monologues about whom are highlights—snorts the right drugs, and has, almost, the finest business cards money can buy. Which business card scene is a tiny work of genius. 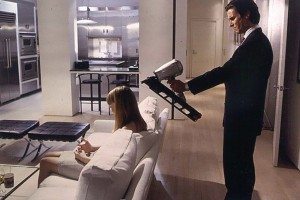 inappropriate use of a nail gun

And it’s all too much for him. He needs an outlet, so he hacks people up in ever more creative ways. Most of which takes place off-screen. For a horror movie, there’s not much blood. His mania grows worse and worse until he’s driven to confess. Nobody believes him. In fact, evidence suggests he imagined it all. Or did he imagine the part where his confession wasn’t taken seriously? Did any of this happen? Did all of it happen? Was the ‘80s a mad sick dream? Or did it really go down that way? Wisely, the movie (and I presume the book) leaves this question wide open.

Did I say American Psycho was a horror movie? Sure, in one sense. Mostly, though, it’s a comedy. A wicked, evil comedy. Bale said he based his characterization partly on an interview he saw with Tom Cruise, where Cruise exuded a kind of happy cheer on the surface, but whose eyes were empty of any human emotion. That’s Bale in the movie. An empty shell. But he plays emptiness with such verve you have to laugh. There’s something about his mantra, “I need to return some videotapes” that never grows old. Returning videotapes. Was the ’80s ever about anything else? 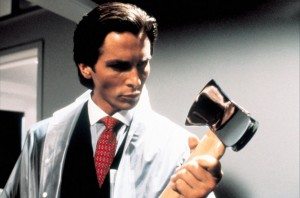 let me tell you about Huey Lewis…

American Psycho looks back on the ’80s and laughs at it, laughs at how seriously it took itself, laughs at the idea it ever thought it was a too suave wealthy serial killer, and asks if maybe it wasn’t just making up a bunch of bullshit. And the ’80s? It doesn’t know how to answer. To be on the safe side, it’s going to go on smiling and pretending it’s not completely insane.