I’ve got  this Edie Brickell & the New Bohemians song going through my head. I don’t remember the last time I heard it so its resonance in my skull is mysterious.

The song includes this lyric:

Choke me in the shallow water before I get too deep.
What I am is what I am are you what you are or what?

And that lyric reminds me of another pop artist, from a little bit earlier than the 1980s. A guy known as Lao Tsu. In his double-platinum first album, The Way of Life, he sang something akin to Edie’s insight, which translates as:

What I’m talking about, in case you’re not following my rambling, is how definitions keep us from truly knowing ourselves, particularly if you’re a pop star. What does this have to do with films, you inquire?

Well hold on to your dang horses; I’m getting there. And where I’m getting is to the astounding reality of fabricated personality. Just because you’re a teen idol doesn’t mean that your insights can’t reverberate through the ages, like Lao Tsu’s or Edie Brickell’s.

That’s what we’re gonna take a squizz at this week for our Mind Control Double Feature. So don’t hate us because we’re beautiful. Don’t dismiss us just because the kids all squeal when we take the stage. Look beyond our carefully crafted look and sound and sense what we truly are.

We are what we are. Are you what you are or what? 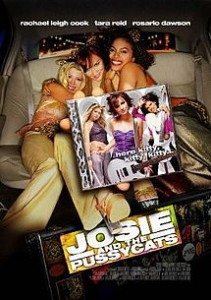 And I just lost a ton of you. Hello? Hello? Is anyone still there?

Josie and the Pussycats started as an Archie comics series about a trio of girl rockers. Then, later, it was a Saturday morning cartoon of debatable merit. Someone, somewhere, somewhen decided these fictional pop stars were still marketable and then that person was very disappointed when their business decision resulted in this film. 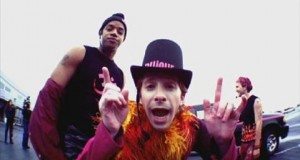 In the story, superhot boy band Du Jour (including Seth Green and Breckin Meyer) stumbles upon some weird subliminal messaging in its music. Rather than attempt to explain to the teen idols how they’re just tools used to sell stuff to malleable kids, their manager Wyatt (Alan Cumming) grabs a parachute and lets the guys’ plane crash, killing them and their monkey. Wyatt floats down to earth in Riverdale, where three struggling musicians, Josie, Valerie, and Melody (Rachel Leigh Cook, Rosario Dawson, and Tara Reid) play gigs in bowling alleys. Needing a new pop act to slot into the hole left by the tragic death (and immediate record sales boost) of Du Jour, Wyatt signs the Pussycats on the spot.

This is the role Tara Reid was born to play.

When the film came out, critics saw Josie and the Pussycats and compared it to Spice World, the Spice Girls movie (which I haven’t seen), as that also came out around the same time. They saw Tara Reid, and flouncy girls, and bright colors, and a lot of product placement and didn’t bother themselves with any of it. I can understand that. But they were dang fools.

Josie and the Pussycats is a refutation of Spice World‘s commercialization of youth.

Not only is Josie and the Pussycats a film about how pop culture is sold to kids, but it is also the perfect illustration of how that process unfolds. The film uses the techniques it lampoons to engage its target audience. It sells them a wake up call in exactly the way they’re used to being targeted everyday, everywhere they look and listen and sense. The film is a commercial for seeing through commercials.

I can get behind that. If there’s one skill today’s youth require, it’s the ability to reject a sales pitch. 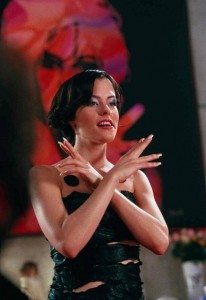 Josie, Valerie, and Melody become instant celebrities because this record company CEO, Fiona (Parker Posey), says they should be: poof, they’re stars. Just like Du Jour, the Pussycats’ music gets warped by subliminal advertising inserted in collusion with the government. And while this satire is unspooling — about how easily the youth of today gets duped into liking whatever they’re told to like — the screen is oozing product placements for everything from Pizza Hut to Puma.

A lot of people also saw that as reason to cry dirty pool, but they missed the point. That’s right, I’m telling you to take Josie and the Pussycats seriously. Why? Because not a single one of the product placements you see in the film is authentic. They’re all spoof product placements; writer-directors Harry Elfont and Deborah Kaplan inserted all of the gauche ads without asking for or receiving any payment from the companies. The product placement is only there to illustrate the real message of the film. It’s there to make you more aware of how pervasive advertising is.

So if you’re the type of person who only likes what you’re instructed to like, then the joke is on you. Even if I’m instructing you to like Josie and the Pussycats. 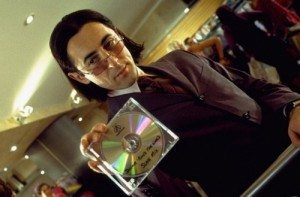 When you watch this film — and you will — you’ll be surprised by how genuinely funny and entertaining it is. This is a film written and directed by people with a wicked sense of humor. It’s performed by people in on the joke (cameos include Carson Daly, Eugene Levy, and Babyface). They’re all smart enough to laugh at themselves and they’re deft when it comes to poking themselves in their sensitive spots (in a mostly family friendly way).

Beware suckers born every minute, because it’s hard to watch this film and not leave with a newfound appreciation for both the surface and the core of life — for both are essentially the same.

Yes. It is full of pop music and teeny-boppers and mass-market visual stylings. Yes, the three leads are hotties and their sex appeal isn’t incidental. Sure, it’s for younger folks and it’s cut like an MTV music video.

But I stand behind it. If I had a kid, I’d play it for them and watch it with them if they didn’t think I was the most embarrassing human on the planet, which they certainly would.

Head is, like Josie and the Pussycats, a deconstruction of manufactured, marketed pop realities. Unlike Josie, though, Head was made by four guys who served as their own ideal target — the Monkees.

Yep. The Monkees were as pre-fab pop as possible back in the 1960s. Four gents selected for their appeal, regardless of their marginal musical talents, set in front of television cameras and paid to act a part. For the first few years, they didn’t even have much to do with the music they supposedly played.

If you ever saw the show, The Monkees, you’ll know it was kooky, for-the-kids, unchallenging stuff. Over the years, however, Mickey Dolenz, Peter Tork, Michael Nesmith, and Davy Jones developed into a band in their own right. This, as Dolenz said, was “the equivalent of Leonard Nimoy really becoming a Vulcan.”

The Monkees strained against the constraints of their manufactured pop personas and basically committed career suicide by making Head, a film that no one in their primary audience could understand and no one else was interested in seeing. They were just a bunch of pop stars after all. Taking them seriously would be like taking Josie and the Pussycats seriously.

Your fakeness can’t save you from reality

That was a shame because Head is seriously weird and wonderful.

Basically, the film is a plotless meandering through the psyches of the Monkees as they attempt to determine whether or not they, as purely scripted characters, have free will. As one song in the picture goes (sung to the tune of The Monkees theme song):

Hey, hey, we are The Monkees
You know we love to please
A manufactured image
With no philosophies.

Not exactly a feel-good message, right? And that’s just the start. This film dissects the quartet like a foetal pig and it is as gentle as a bored high schooler with a scalpel. It starts with the group being pursued through an opening ceremony for a new bridge and escaping by jumping over the side. They land in a series of psychedelic, cinematic landscapes that riff on genre, culture, and the roles they cannot escape. 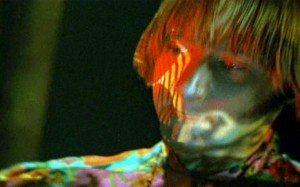 C’mere kid. I got something for yas.

Director Bob Rafelson (Five Easy Pieces) said writer Jack Nicholson (yes, that one) wrote the script while on LSD. It’s based on a brainstorming session between the band and the crew and a whole lot of marijuana. That is definitely the way it feels, too.

When Head was released it totally tanked. No one had the energy to even consider that these pop sensations had anything interesting to say. Part of that is because they’re not the best actors, but more is due to the fact that they were The Monkees and not Bob Dylan. No respect, I tell ya, and I’ve seen Pat Garrett & Billy the Kid.

Watching Head is an experience. It’s hard to find an apt analogy as to what seeing this film would have been like for a 1960s Monkees fan. Perhaps it would be like a tweener today seeing Vanessa Hudgens in Spring Breakers? Maybe if they had accidentally had a glass of the wrong Kool-Aid, then that would fit the bill. Actually, in many ways Head would also make a great double bill with Spring Breakers. Oh well. next time. 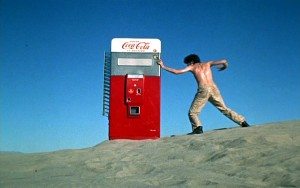 Can we break out of the molds society structures for us? I’m afraid Head isn’t the most hopeful tale, which is part of why it’s so breathtaking. Here’s the view from inside the lion’s den. You think you want your spot in the limelight, but being a product isn’t all it’s sold to be.

In case you were wondering, the film’s title is a reference to Andy Warhol’s film, Blow Job. Take a look at the poster up above — that was part of the original marketing campaign and it’s just like Warhol’s film. Watch a man’s head as he gets stimulated.

There you go. Have fun at the movies, kids! Don’t forget to buy your commemorative popcorn tub and the soundtrack and your kitty ears and Peter Tork’s jockstrap. I’ve got it around here somewhere.