You know that glorious feeling when the bell finally rings in your last class and you just abandon your books and stroll out into the sunshine a fully educated human being? 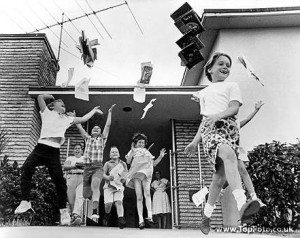 And the joy blisters your face. The magical fairies of happiness dance through the downy hair on your neck, urging you to do a mess of keg stands with or without your pants on. And what kind of low-life would ignore the fairies of happiness? Not me, sister.

Oh, it is a beautiful, shining moment that could go on forever. That is, so long as no one approaches and asks you what you plan to do with your life.

What kind of jerk does that anyway?

You’d think your lack of pants and the high-level of intoxication evidenced by your jaunty traffic cone hat would clue these people in to the fact that you do not actually so much have a plan, exactly.

Isn’t it enough to just enjoy being done with something, be it high school, or college, or an entire roast ox?

I say that it is. The enjoyment: that is a nice, prolongable stage one. The plans: those are a postponable stage three.

Stage two is finding yourself caught between worlds, no longer a student and not yet a full-fledged member of the adult universe either. This directionless ennui is powerful stuff and, not coincidentally, the focus of this week’s Mind Control Double Feature. 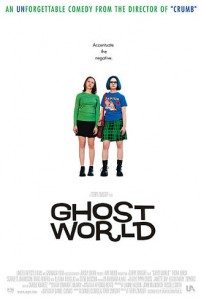 To be honest, I had originally planned to write a double-feature post about the best comic book movies of all time. Unfortunately, I could only find one comic book movie that was truly worth writing about. I bet you cannot guess which one that was?

That’s right! It was Ghost World! You are very smart for someone who is no longer in school but doesn’t quite know what to do with your life yet.

Ghost World is a film that perfectly captures the bittersweet curse of abrupt freedom. Getting what you wanted is only awesome if you have the slightest idea what to do with it.

Terry Zwigoff’s film Ghost World perfectly translates Daniel Clowes’ graphic novel. And Clowes is a genius when it comes to immersing you in his strangely recognizable world of ephemeral melancholia. His characters — here brought to life by a cast headlined by Thora Birch, Scarlett Johansson, and Steve Buscemi — are painfully real. They are not broadly drawn superheros or diabolical villains; they are humans with fluctuating motivations and evolving personalities. This is not a Superbad-style high school life of hijinks and cut ups. It is not even Freaks & Geeks or Dazed and Confused high school. It is the high school world of last week’s balloon, untethered and low on helium but still struggling to stay afloat and out of the power lines. 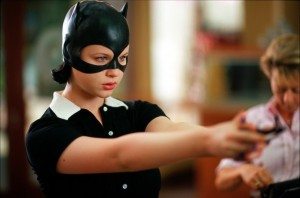 Give me all your money, bitch!

Take Enid, played by Thora Birch. She’s best friend to Rebecca (Johansson) and as snarky and condescending towards the modern world as only a recent high school graduate can be. Boys? All losers. Jobs? For pathetic suckers. College? Get serious. That’s for lame-o dreamers and nauseating go-getters who listen to reggae. Enid would rather pine for an era she never lived through, where she imagines people and things had substance, and remain a ghost in this one — the fake-butter slathered time she’s cursed to inhabit.

So Enid, what are you going to do with your life? 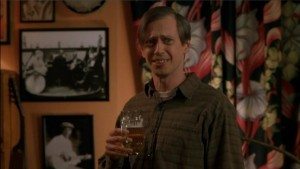 The plot of Ghost World, such as one exists, trails Enid as she reluctantly leaves her increasingly lonely self-made cocoon of snark. She tries to be the woman she hopes to become, and the person others expect, but loathes it all — it’s either that or accept that she’s stuck with herself for real and for ever. Enid and Rebecca mock and then befriend Seymour, a middle-aged geek of magnificent depth played perfectly by Buscemi. And that’s it.

When Enid looks at her post-graduate universe, it is only Seymour that offers her hope. So she’s horrible to him and deludes herself about it. Like Enid, Seymour lives in the past and pushes away the present. When she’s a creep to him, she is actually wrestling with herself. Which means she’s going to lose and she’s going to win and she’s going to end up sore.

If that doesn’t seem to make sense, it might be because you don’t remember the feeling of being young and lost. The good news is that Ghost World is drowning in that feeling.

Is that good news? Yes. Trust me, it is.

Plus, Ghost World is not the story of things happening so events aren’t so important in it anyway. It’s the story of a slow, unenthusiastic transformation. That’s what we call character development and this is precisely how it’s done — without grand epiphanies or trumpet fanfare. People change slowly, reluctantly, and because change is the least painful of their miserable options. 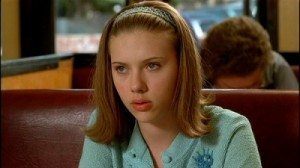 Can we call you Weird Al?

The film of Ghost World is charmingly loyal to Clowes’ graphic novel, mimicking panel layouts and bringing them to life — much like Robert Rodriguez’s take on Frank Miller’s Sin City. Clowes co-wrote the screenplay, so if you’re one of those adherents to the auteur theory, I think this one goes in Clowes’ column, not Zwigoff’s. Don’t feel bad; Zwigoff gets Bad Santa and that’s a film that’s just as good in a very different way. 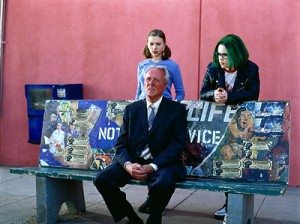 You don’t know what you’re talking about.

One of the odd peripheral characters in the film — of which there are many — is Norman (Charles C. Stevenson Jr.). Norman spends the entire film sitting on a bus stop bench, waiting for a bus, refusing to accept that the route was discontinued years ago.

In the end, and I’m not spoiling anything, Enid is forced to deal with who she is and to pick a path forward, any path. She opts to wait for the bus at Norman’s stop.

Where that bus will take her, should it ever come, I cannot say. 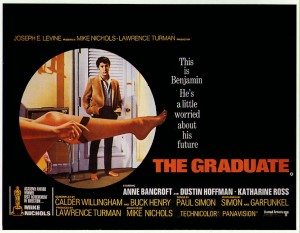 In many ways, Ghost World is the direct descendant of The Graduate. You’ve seen The Graduate, right? Right? Oh jeez. What are you doing with your life?

Instead of dealing with the completion of high school, The Graduate follows Benjamin Braddock (Dustin Hoffman) as he finishes college and falls back into his wealthy parents’ comfortable nest, debilitated by a lack of motivation. Everyone around expects this young promising fellow to make something of himself — to go into plastics, perhaps — or to do something, be something, whatever he likes. 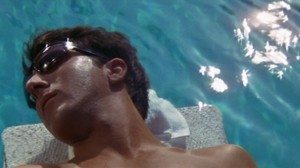 Why won’t they just leave him alone to float in the pool while Simon & Garfunkel play?

As you may know, what Braddock decides to do with himself is to fuck his parents’ friend Mrs. Robinson (Anne Bancroft), despite the fact that they have nothing in common. She tries to seduce him and he can’t think of a reason not to let her corrupt him. Welcome to the adult world Ben!

Are you here for the affair, sir?

Alas, Ben’s dad and Mr. Robinson insist on the best for Ben, which in their view is a nice date with Elaine Robinson (Katherine Ross), the daughter whom Mrs. Robinson has forbidden Ben from seeing.

What will Ben do with his life? How will he acclimate to adulthood? Will he find himself mired in the morass of possibility? Well, watch the damn film and find out. Like Ghost World‘s Enid, Ben must look the ugly reality of the world in the kisser and find a way forward whether he likes it or not. This is the only world we got, after all, although it pains me to say so.

Without giving the game away, The Graduate finishes up like Ghost World, on a bus. Is this coincidence — that two films about the completion of school close with their main characters riding the back seat to the future? I’m going with no. It’s an image we all can relate to, we’re growing up and going on, but only because staying is no longer an option. That’s the end of childhood for you. Leave the nest and fly little bird!

While it’s been ages since I’ve watched The Graduate, as soon as Ghost World ended I knew that I had to pair these two films. I love the way both nail the reluctance of the recent graduate to accept their new roles. I love the way these characters learn to understand what adulthood means — through Seymour and Mrs. Robinson — and how they both end: ambiguously.

Will these buses take our heroes where they want to go? Will they end up just like role models that influenced them?

You’re an adult. You tell me.