Last night I saw Star Trek Into Darkness with the Supreme Being. This morning, I woke up to George Takei’s smiling mug on Facebook. And in between — listening to SB express his genuine pain at how J.J. Abrams mistreated Kirk and Spock, and having the Dr. Mrs. point out that SB’s reaction to Into Darkess wasn’t dissimilar to my reaction to Skyfall, and hearing various nerds of various stripes lament what Shane Black did to Iron Man — well, I’ve been thinking about character.

I’ve been thinking about continuity of character and character development, and how they are two sides of the same coin.

“Don’t go changin’,” as they say, right after they say “Couldn’t you, for once, do something different?”

Now, to be clear, I’m not writing here to defend Star Trek Into Darkness or The Great Gatsby or Ant Man, or any other old story that’s been given a quick course of CPR and sent on its way to earn a living. I’m more interested in what makes character changes easy to accept and what makes them repulsive.

I have come here to bury Caesar not to praise him.

In general, the Supreme Being is right. There isn’t much to appreciate about the new Star Trek movie. That’s true even if, like me, you don’t give a rat’s ass about the show or the characters or the history of Star Trek. I thought this one was your standard summer entertainment in that it kept me amused and didn’t make any sense whatsoever. I had a good time watching it. There was some proper acting (Pine, Quinto), some disappointing acting (Pegg, Cumberbatch, Weller), a lot of bombastic music, ridiculous action sequences with even more preposterous camera moves, and all of two real women characters in the egalitarian, space travelling future — one of whom was a miffed girlfriend with a gifted tongue (Saldana) and the other (Eve) who got undressed because why exactly? There was no Captain Janeway, no women in Starfleet Command, no successful navigation of the Bechdel test. There were more aliens with meaningful roles than females. 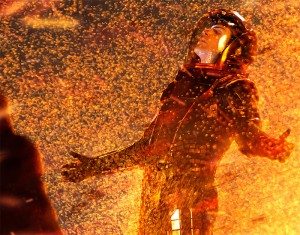 We must prepare for the coming of Gozer.

But character. In Star Trek Into Darkness, familiar characters did things that seemed dramatically against type. Spock, for instance, the emotionally locked half-Vulcan, went raving postal bananas. He was like one of those naked dudes on PCP that it takes 12 cops to subdue. That’s just an example. Not only did characters stretch far beyond their established behaviors, but in many cases they actually swapped traits with other characters. Spock behaved like Kirk and vice versa. The details of which are not particularly important and are gone into elsewhere anyway.

In J.J. Abrams first Star Trek film, there’s some time travel shenanigans that change key events in the past of characters like Kirk and Spock, allowing those characters to grow into different people (in that eye-rolling, re-boot, sci-fi, shortcut way). This Kirk is not the same Kirk portrayed by William Shatner. This Spock is not the same one as Leonard Nimoy’s — who actually appears in this film, too, as if to remind us: not the same guy, not the same world, don’t ask questions.

So does that mean that we should just shrug our shoulders and say, “okay, fine, show me something new”? On the simple storytelling level, I don’t have a problem with it. Sure, the time travel thing is cheap, but no cheaper than the variable efficacy of transporter devices or whatever. And yes, there is a serious disregard for logic in the storytelling here beyond the character changes; but can I accept that this Kirk is not that Kirk? I can.

Why? Because I don’t care about Star Trek and have nothing invested in Kirk being Kirk. I have not come to see this movie because I love Star Trek and its personalities and its ethos. I have come because I write a movie blog and I like seeing movies. 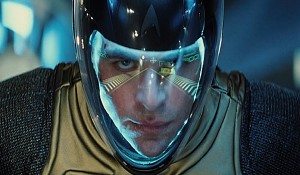 This is either a screenshot from Star Trek Into Darkness or Tron: Legacy.

This raises the critical issue, though. If you’re going to make a film within an established framework (that of Star Trek, or Star Wars, or Marvel Comics, or F. Scott Fitzgerald’s work), are you beholden to the original concepts?

Look. I can feel this post quickly becoming boring. But these aren’t esoteric questions. This is something we’re facing again and again in this era of mega-budget corporate filmmaking. Why make a Star Trek movie if you don’t want to work in the world Gene Roddenberry created? Star Trek means something; that’s why people go to see Star Trek movies.

Otherwise, you’re just making something new and calling it Star Trek. And the only reasons to do that are business reasons which I have little respect for. 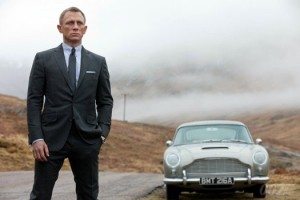 The way that Supreme Being felt about Star Trek Into Darkness is the way I felt after seeing Skyfall, more or less. Skyfall was a perfectly good spy movie, but I didn’t recognize James Bond in it. Can James Bond change? Yes, of course, characters can develop! But if established characters are going to undergo major changes, the motivations for those changes have to happen on screen or your core audience will feel lost.

If you make a film called Star Trek, it’ll be most appealing to fans of Star Trek. If you don’t give those fans what they have grown to expect from Star Trek films (i.e. recognizable Spock and we’re not just talking pointy ears), you’re taking advantage of their enthusiasm unkindly. People like me might still go and have a good enough time, but I don’t care if the film is Star Trek or Space Nards. Summer movie go boom; is good fine.

In a hypothetical example, you can’t make a Harry Potter movie and have him be a drunk with a wooden leg and a French accent unless you show how the character we’re familiar with ended up that way. You can’t have James Bond be a brand new agent (as he was in the newest Casino Royale) and then, only years later, be old and washed up and yet somehow driving the car from Goldfinger as if it was his and he’d been the one to fight Jaws in Fort Knox with Pussy Galore. If you play fast and loose like that, then that’s like punching your audience in the underplums. It’s dissociating. Instead of latching onto a familiar character, we’re left confused and frustrated.

In Iron Man 3, Tony Stark undergoes a bit of physical character development at the very end of the film. Comic fans say this surgery deprives him of his character’s main motivation. If you’ve seen the film you know what I’m talking about. Is that the same thing we’re talking about here?

Well. Look. We’ve got a few different things going on. On the weakest level, we’ve got Skyfall, which just plain throws character away in order to jump on the ‘life is so grim’ Jason Bourne bandwagon. Whether or not Skyfall was a good film, it wasn’t a good James Bond film. If it was a meal, I would have sent it back because it’s not what I ordered. One step up (sorry SB), you’ve got things like this new Star Trek incarnation. Here, they’ve made some lame attempts to explain why things are different on a character level. It doesn’t call into question what you’ve already seen, it just changes things in a way that’s hard to comprehend. They’ve made no effort to match the tone and theme of the original (and subsequent) series — and that’s disappointing and disturbing but not the subject of the day. And then there’s Iron Man 3, which throws fans a rogue wave and cuts the character loose from established moorings. Where will Iron Man go from here? No one knows! Is that exciting or infuriating or unimportant? Yes. One of those, probably.

Not getting into the relative merits of these three films, I’d say the Iron Man 3 game-changer is kosher. People are allowed to change, even familiar people. That’s what keeps characters fresh and stories interesting. If you don’t want your favorite characters to change, you can keep watching The Wrath of Khan over and over until your eyes bleed and pretend that Kirk doesn’t change and grow within that single Star Trek tale. He’s still Kirk in it, but he becomes a wiser Kirk.

This Kirk in Star Trek Into Darkness isn’t the same Kirk people love. We were deprived of the chance to observe and judge how this Kirk came to be because it all happened in a stolen car in one scene of prologue set to a Beastie Boys track. His dad died, ergo he is angry young man. 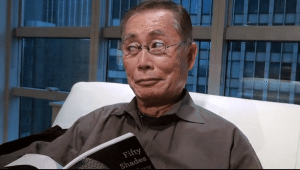 Do I have a point? Yes. Definitely. It’s that you should be paying attention to George Takei.

And I realize this point is abrupt, but I didn’t mean to write so much and it’s time to make dinner. George Takei played the original Sulu in the first Star Trek series. Now, he’s a major web personality who actively supports gay rights through the use of humor. He gradually went from being a familiar actor on a popular show to an activist and self-styled spokesperson. If you look at him today — if you inspect his character — you recognize the man who portrayed Sulu all those years ago. He’s become someone new, but he hasn’t broken with the past. Over time, in small steps, he revealed his personality and our perceptions of him grew. 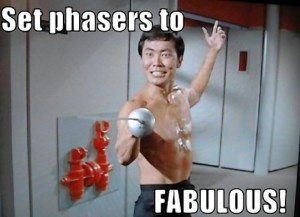 That’s the way characters develop; it’s the way real people develop. Through interactions, events, and introspection. Not through changes in the time stream continuum or via recasting or just to attract a younger audience.

I don’t need every film to be an important work of art. I’d be a lot happier though if I felt our cultural history was treated with a modicum of respect. There is plenty of room for new stories and character development. Remaking everything to suit the current tastes? It just makes me sad that that’s the way studio executives get rich today. On the green blood of innocent Vulcans.