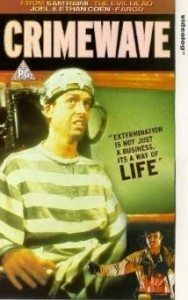 I now count myself among the small number of people who have seen Sam Raimi’s second film, Crimewave (’85), the follow-up to his surprise success Evil Dead, written with Joel Coen prior to the Coens finishing Blood Simple. There is a reason few people have seen Crimewave, and the reason is this: Crimewave is not a good movie. It’s not a good good movie, it’s not a good bad movie, it’s not a good cult movie. I feel I am not overstepping my critical bounds by saying that nothing whatsoever works in Crimewave. It’s like Raimi and Joel Coen and producer/star Bruce Campbell decided to make a cake. But in place of sugar, butter, flour, and salt, they used bumblebees, Elmer’s glue, Cheerios, and thumbtacks.

Which, granted, makes for a unique taste treat, if nothing else. But yes, there is nothing else. Crimewave plays something like a live action Warner Bros. cartoon, but a long, boring, unfunny one. It’s uniquely weird, let’s say. I’m having trouble even conceptualizing how to describe scenes, let alone actually describing them for you. 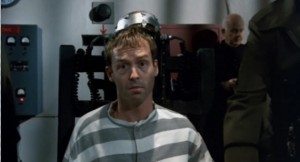 The movie stars Reed Birney (who has since had a long career in television) as a poor schmuck about to be cooked in the electric chair for a string of murders he didn’t commit. From his seat, he relates the series of unfortunate events leading to his current (ha!) predicament. Given the movie he’s stuck in, Birney does a swell job. He is, more or less, delightfully unhinged. He’s a cartoon. 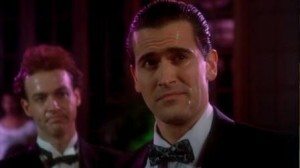 Also enjoyable is Bruce Campbell, who was supposed to star until the studio said something to the effect of “No fucking way in hell this clown stars in the picture.” Campbell plays a smaller part, and eats it up, as is his wont.

All other performances are of train-wreck quality. Shocking and horrible and oh god, the burning bodies! Somebody help those poor people! The blood! THE BLOOD!!!

Brion James may be the weirdest guy in the picture. You know him best as the replicant in the first scene of Blade Runner who doesn’t know what a tortoise is. He speaks in a high, squeaky voice so bizarre I wondered if maybe it had been dubbed. He’s a bad guy. His partner is a big guy whose name I can’t easily locate on IMDB. He grimaces freakishly throughout and grunts a lot. 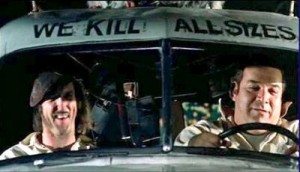 not to be confused with John Goodman and William Forsythe

There is a scene where he chases a woman through a series of like 50 brightly colored doors. She shuts them, he smashes his way though them. Where does one find so many doors? I honestly don’t remember. And I watched it last night. Maybe a theater? Were they in a theater?

The climax features a fist fight atop a moving car. There are even explosions. Exciting stuff for a cheap little flick. Only not actually exciting. Scenes in this movie go on so long and are so bad they almost, but not quite, turn the corner into surreal brilliance. 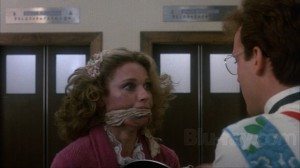 There’s this one edit where we dive down into the mouth of a screaming woman and then zoom out of a trumpet at a dance. Which wouldn’t be at all notable except that the Coens used this exact bit for Barton Fink. At least the trumpet half. Didn’t they? Or did I just make that up?

Despite it all, I watched the whole thing. I had to know about that car full of nuns tearing around town that opens the movie. Who are those nuns? Where are they going? The answer might not surprise you. In fact, to be honest, I’d forgotten about the nuns until they showed up at the end. “Oh,” I said. “Those nuns. Right. Is this almost over?” 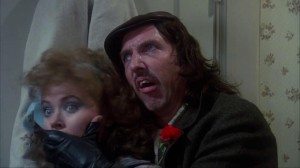 no one wants her to talk

If you’re a Raimi junkie and need to see everything he’s ever made, I suppose this could be of interest. Although why are you a Raimi junkie? Did you see that Oz monstrosity he just made? Egads.

On the plus side, because Crimewave barely played—“It wasn’t released,” said Campbell, “It escaped”—Raimi decided that next he’d better do something with the potential for success. So he made Evil Dead II. And never since topped it. 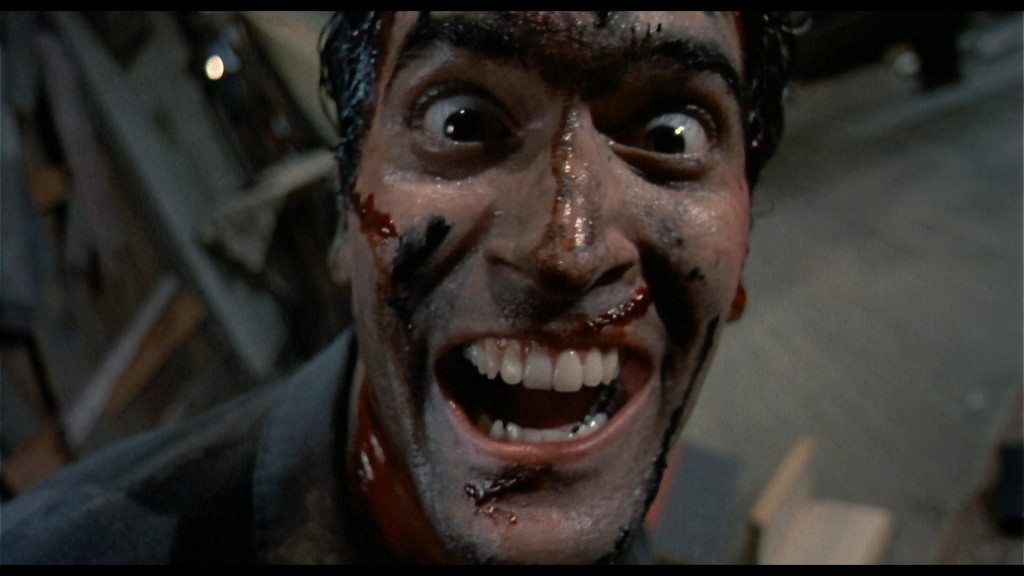 One response on “Precious Few Words On Sam Raimi’s Crimewave”