These two episodes could be called “Jesse’s Journey.” Episode 6 opens with a telling moment. Jesse waits nervously on a street corner and observes a beetle crawling on the sidewalk. He bends down, lets it crawl over his hand and go on its way. Jesse is kind to the little things. Then Skinny P shows up with the address of the meth-heads who robbed him, and first thing he does is squish the bug. 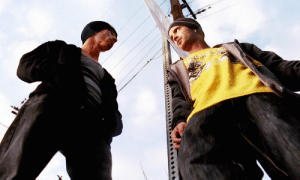 So Jesse has been tasked by Walt to take out the thieves. He goes to their house, breaks in, and holy hell is it ever a filthy nest. Nobody’s home save for a little quiet kid, who wanders out and turns on the TV. The only working channel features an infomerical for knives. Jesse makes the kid a sandwich. 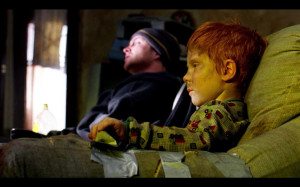 As for Walt, things actually end up going well for him. There’s almost trouble at first when Gretchen calls Skyler and Skyler thanks her profusely for the money Gretchen and Elliot are providing. Hmm. Gretchen comes over to talk. 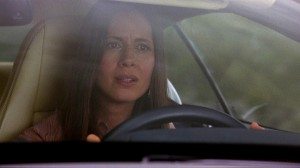 another victim caught in Walt’s web

When Walt comes home to find the ladies together, he’s ready for the worst, but Gretchen doesn’t blow his cover. They arrange to meet later. At dinner, Walt apologizes for bringing her and Elliot into his lies, but tells her he doesn’t owe her an exaplanation of why he did it or how he’s paying for his treatment. Mad about it, she tells him he’s a different man. Walt is all barely concealed rage. He tears into here. Accuses her and Elliot of stealing his work to become rich. She says something about how Walt left her in a way she didn’t like, but it’s not very convincing. Does Walt have an honest beef here? It’s hard to say. Finally she says the worst thing imaginable: “I feel so sorry for you, Walt.” If he could shoot lasers from his eyes and burn her to cinders, he would. Instead, he says, “FUCK. YOU.”

Now that should wind up blowing his cover, but when Walt comes home, Skyler says Gretchen called only to say that she and Elliot could no longer pay for Walt’s treatment. Interesting. Even after all that, Gretchen still covers for him. Walt says he saw her and Elliot and that they essentially told him they were broke. Skyler buys it. Whew. Quite the dodged bullet there, Walt.

Breaking Bad is full of moments like these, where a character behaves in a believeably unusual way without the reasons being spoon fed to us, the audience. Gretchen’s continuing kindness to Walt, however small a kindness, speaks volumes about their past relationship. What really happened between them? What really happened with Walt and Grey Matter? Just how much guilt is she carrying around? I recall Walt saying more about this in season 5, but I’m hazy on the details. Have to wait and find out. 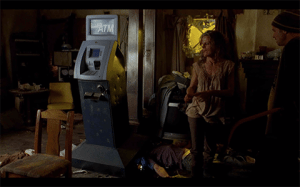 Back with Jesse, the meth-heads Spooge and his girlfriend return, screeching at one another hilariously. Jesse yells at them, threatens them, but keeps on not really doing anything to them. Spooge says he has Jesse’s money. It’s in the ATM they just stole and lugged home. 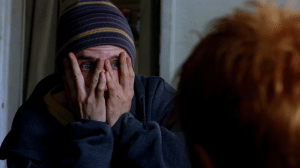 Spooge beats the ATM with a sledgehammer to no avail. Night falls. Jesse talks to the kid. Thus distracted, the girlfriend knocks Jesse over the head. When Jesse regains consciousness, Spooge has the ATM jacked up at an angle so he can drill holes in its bottom. He and his girlfriend continue arguing. He calls her a skank over and over again. High and fed up, she tips over the ATM and squishes his head like a melon, then passes out.

Jesse wipes down his prints when the ATM bursts open and the money spews out. He dials 911 on the phone, takes the kid out to the porch, all safe and wrapped up in a blanket, and gets the hell out of there.

So Jesse’s no murderer yet. His kindness, or weakness, as Walt would see it, prevails. 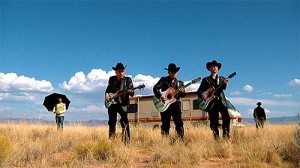 Episode 7 opens with the video for “Negro y Azul,” a mariachi song sung in Spanish all about Heisenberg, the mysterious meth-maker whose blue meth has made it to Mexico and has the cartel very upset. The refrain of the song goes, “That homey’s dead. He just don’t know it yet.” Only in Breaking Bad would a little exposition about the reach of Walt’s meth be turned into a full-length mariachi video. That’s the kind of creative thinking I can get behind.

Beyond that, the episode is about moving pieces into place, plus one hell of an ending.

Now that Elliot and Gretchen aren’t funding Walt, Skyler gets a job, one she had years ago, a book-keeping position at Beneke, now run by Ted Beneke, a seemingly nice guy who through Marie we learn once grabbed Skyler’s ass at a party. Or more? Hmm. Good old Ted Beneke. It’s wonderful when way down the line he turns up again so unexpectedly. 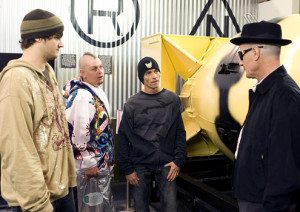 Heisenberg meets with the boys

Walt leaves a message with Jesse, says not to bother with “handling” their problem. Too late, Walt. He goes to Jesse’s apartment to find him a wreck. Jesse implies that he killed Spooge at first, but eventually the whole story comes out. Still and all, that squishing head is too much for Jesse to deal with.

In Jesse’s place, Walt meets up with Combo, Badger, and Skinny P to make the drop, and learns that it’s all over town about Jesse having crushed a guy’s head with an ATM. Everyone’s paying up pronto out of fear. They ask Walt if it’s true. He wisely says nothing but, “You didn’t hear it from me.”

And then the pep talk. Walt actually tries to build Jesse up for the first time, instead of tearing him down, a tactic he will return to as he further polishes the many methods for manipulating Jesse. Walt tells Jesse, “You are a blowfish.” Full of air, but seemingly deadly. Jesse likes this. It pulls him from his torpor. 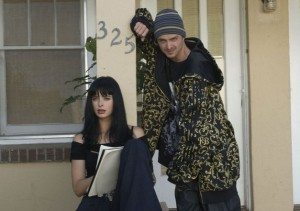 From scared would-be killer to up and coming druglord. Things are looking up for Jesse. Not only that, but once he installs his new flatscreen TV, he invites Jane over to watch it. They sit side by side staring at the blue screen and its message, Acquiring Satellite Signal. Finally, she reaches out a hand and finds his. A lovely romantic moment to go out on.

Now about the hell of an ending I mentioned, which actually comes just before the nice moment with Jane and Jesse. For that we return to Hank. 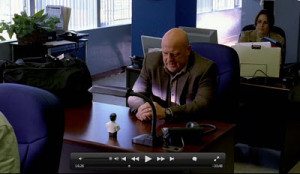 Hank doesn’t fit in in El Paso. Everyone speaks Spanish and ignores his blustering jokiness. Poor Hank. From the big man to the little fish. The team interviews a snitch in his fancy motel room, where he pages through a Skymall magazine demanding outrageous items in payment. His name is Tortuga, the turtle. He’s played by Danny Trejo with evident relish. 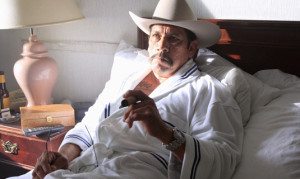 Next the team is on a hillside in Mexico, waiting for Tortuga to show up with his info. They make fun of Hank in Spanish. Hank spots Tortuga through binocs, or rather, he spots Tortuga’s head. 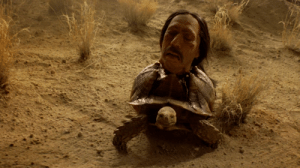 They drive down to the valley to see a turtle with Tortuga’s severed head stuck on its back. Sickened, Hank runs behind a truck door while the guys laugh at him. One of them grabs the head, triggering the explosive beneath. Hank runs out to see men blown to pieces, screaming, limbs missing. It’s a nightmare.

Again, this all stems from Walt’s actions. Walt has sent Hank on a course of destruction that’s going to get worse before it gets better. And of course the getting better part culminates with Hank learning that Walt was Heisenberg all along in the final moment of the first half of season 5. Which then again, I guess that’s hardly better, no matter how it all works out.