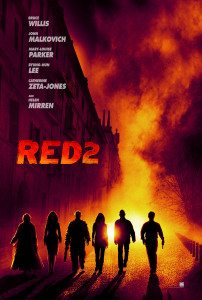 I went to see RED 2 to give my new glasses a test run. I am happy to report that this film is completely visible. More visible, in fact, than anything else I’ve seen this year.

If you saw RED, then you know what to expect from RED 2: the same thing just with slightly less plausibility. Luckily, no one is going to see RED 2 for plausibility. They are going because it’s amusing to watch this cast of big names cartwheel between action scenes. This is particularly true in the case of Mary-Louise Parker, who has crazy eyes and a great mouth and generally looks like a fun person to have around. Her exuberant fish out of water character is a solid source of off-kilter enjoyment.

There is a story to RED 2. Some of it is engaging. John Malkovich is a good sport. Catherine Zeta Jones appears to have been replaced by a reasonably good latex replica of herself. Koren actor Byung-hun Lee made a lasting impression, but I don’t remember what it was. 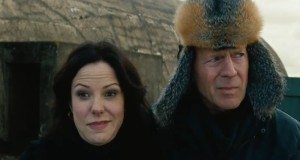 I, too, am skeptical

RED 2 wasn’t as ambitious as many of this summer’s other pictures and, consequently, was far less of a let down. You want to watch things blow up in between comic scenes with exaggerated characters? Boom. RED 2 is for you. In attempting to do nothing but entertain, it succeeds adequately.

Yep. If you share my weakness for Mary-Louise Parker and have decent eyewear, then perhaps you will also find RED 2 completely visible. If not, you will probably see less of it.

2 responses on “RED 2: Most Visible Film of the Year”