Comic-Con had its collective head explode yesterday when director Zack Snyder announced that he was set to direct a Superman vs Batman film loosely based on Frank Miller’s The Dark Knight Returns graphic novel. 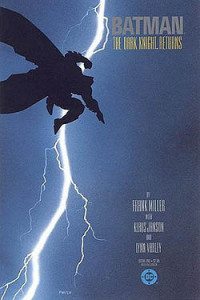 I don’t have a ton of time to write today, but wanted to weigh in briefly.

There are a number of distinct pieces of information here and I easily see how swallowing them together in one dose sounds thrilling.

First off, The Dark Knight Returns is the best piece of comic art I have ever read. I grew up reading comic books, but almost always read Marvel titles — X-Men, Alpha Flight, New Mutants, Dr. Strange, etc. I didn’t know much about Batman or Superman, and what I did know, I learned from Tim Burton’s and Richard Donner’s films (and the campy Batman television show).

I still thought The Dark Knight Returns was superior to Watchmen, or Cerebus, or Ghost World, or anything else I had or have read. Every time I pick it up I adore it even more.

The Dark Knight Returns examines what it means to be a hero at a time when life is beyond dark. There is no comic book good and evil. This is a brutal and ugly and frightening world. It makes Heath Ledger’s Joker seem limp. And at the end of the four book series, Superman is ordered to bring the vigilante Batman in.

The quote that Snyder used to introduce his project comes from this grand finale:

The idea of this story coming to the screen is, indeed, head-explodingly cool. But you can relax because it isn’t going to happen in any meaningful way. 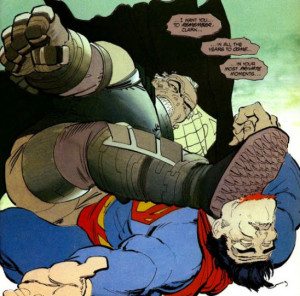 This story won’t play in America; overseas; or anywhere. For it to be told, we’d need to see young mothers killed by bored teenagers, casual rape, intentional child endangerment, and the almost total dissolution of society in Gotham City (as opposed to the wispy, sanitized Gotham conquered in The Dark Knight Rises). We’d need nuclear holocaust and the corruption of everything in which we trust. The story features no triumphant ending in which heroes save the day. There’s an ending in which Batman proves he’s smarter than that sucker Superman — that foul justice trumps blind obedience — and in which the world is left to fend for itself.

It’s fucking awesome. It’s something everyone should read and damn if I won’t re-read it again now.

Snyder is making a combination Superman and Batman film ‘inspired by’ The Dark Knight Returns. That’s the Zack Snyder who just made that tone-deaf Man of Steel film in which Superman murders General Zod and allows both Smallville and Metropolis to come to complete ruin without actually hurting any visible civilians. He makes films that look dark in a way cribbed from Christopher Nolan, but which have the complexity and coherence of Man of Steel. Meaning they’re half-baked and incomprehensible.

Zack Snyder making a film inspired by The Dark Knight Returns is terrible news. His Watchman was a faithful adaptation until the end, but it lacked soul. It was fetishistic; interesting only as a demonstration of style. And that was a film in which he felt constrained to stick to a well-loved story.

Here, he’ll have some team of writers throw Superman and Batman into the machine and churn out Hollywood Blockbuster Plot A12. He practically has no choice but to in this era of filmmaking.

I don’t adore Joss Wheedon’s Marvel hero films. I do like some of them, though. His take on The Avengers involved characters who spoke dialogue. He played around with the archetypes he inherited, but kept them recognizable. Hulk was still the Hulk (or one version of the Hulk). Captain America wore his silly American flag suit, but did so without seeming like a complete abstraction. He wasn’t an ideal. He was a man with idealized strengths. 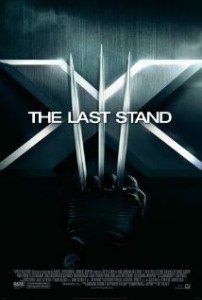 To me, hearing that Zack Snyder is going to put his fingerprints on The Dark Knight Returns is as exciting as hearing that Brett Ratner was directing X-Men: The Last Stand. We’ll get a badly bungled version of Superman combined with an unknown version of Batman directed by a man who understands little beyond what looks good to teenage boys.

And it’s based on the best comic book ever.