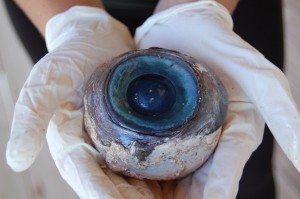 I made you a paperweight

Are your eyes bigger than your stomach? I sure hope not. That would be seriously gross.

Unless you’ve got a really small stomach? But if so, how are you even alive? Do you just eat a steady stream of very small, eyeball-sized meals?

That’s crazy. You must poop like a goddamned hamster.

Speaking of hamsters that are cursed by god, this week’s Mind Control Double Feature presents two films that your kids will love despite their curious odor and plaintive squeaking (the movies, not your kids, I’m assuming).

These films both combine the same strange and wonderful list of components: Both films focus on innovative inventors; they’re both based on well-loved children’s books; they’re both comedies suitable for all ages; and—the coup de grace—they’re both about too much of a good thing, if that good thing is food.

You know. Like when your eyes are bigger than your stomach.

Bon appetite. See you around the Habitrail.

Willy Wonka and the Chocolate Factory (1971)

Let us begin by stressing, most emphatically, that we are discussing and recommending Mel Stuart’s original adaptation of Roald Dahl’s novel, Charlie and the Chocolate Factory, and not, in any way, Tim Burton’s 2005 manic remake, starring Johnny Depp as Michael Jackson—a film which original Wonka, Gene Wilder, called “an insult.” 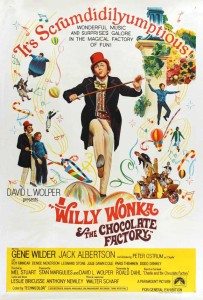 What we are telling you to watch, most emphatically, is one of the best, weirdest, nutsy-cuckooest kids films to ever hit screens. It is a film pretty much everyone in my generation has seen numerous times and quotes with some regularity.

It’s a film that does what any excellent kids film does; it holds up a mirror and lets us recognize the good and bad in ourselves.

So if you’re looking to freak out to some meaningless sugar bomb, don’t be deceived by this film’s confectionary appearance. It’s a dark little tale of survival and sweeties. It is also totally bizarre, but that’s okay, because:

A little nonsense now and then is relished by the wisest men. 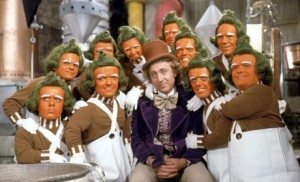 I saved them from the Vermicious Knids

Our story begins with young Charlie Bucket (Peter Ostrum), a poor English boy who can’t even afford a candy bar. That’s a shame, since the mysterious Willy Wonka—a secretive confectioner of much renown—has hidden five golden tickets in five Wonka Bars. Whomever finds one is invited to tour Wonka’s long-shuttered factory. To the grand winner goes a lifetime supply of chocolate.

Nuts, thinks Charlie. He doesn’t have money for frivolities such as candy. He lives with his mother and his four bed-ridden grandparents, chiefly Grandpa Joe (Jack Albertson). Songs are sung and stories revealed, but Charlie’s life gets no easier. The five golden tickets are found by an international spread of nasty children—Veruca Salt (Julie Dawn Cole), Mike Teevee (Paris Themmen), Violet Beauregarde (Denise Nickerson), Augustus Gloop (Michael Bollner)—and a millionaire from Paraguay. 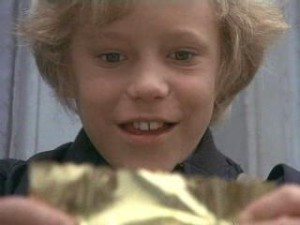 I’ve got a golden ticket!

In his moment of resignation, Charlie finds a small bit of money in the gutter and buys himself a Wonka Bar to eat. Just one simple pleasure. Then, with the change left over, he buys another bar to bring back to his family as a treat. So considerate, that Charlie! Of course, it turns out that the millionaire’s golden ticket was a fake and the real fifth one is still out there somewhere. Where could it be? Would you like to guess?

That’s right! Charlie’s got it! Grandpa Joe springs out of bed and they head down to the Wonka Factory to take their tour. Gene Wilder makes his entrance as the titular artisan and—from his first appearance at the factory gates—it is clear that he is going to own this film like a fish rules a bicycle: undeniably, but in a way one would be hard pressed to explain or predict.

Almost unbelievably, Wilder wasn’t the first choice for Wonka. That would have been Spike Milligan, a pre-Pythonian sketch comedian. Wilder wasn’t the second, third, or fourth choice either. When the young actor, who had recently broken wide in Mel Brooks’ The Producers, did audition however, he was hired on the spot. 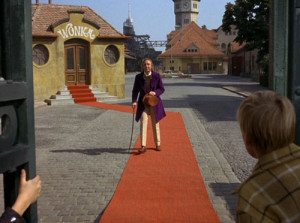 When I make my first entrance, I’d like to come out of the door carrying a cane and then walk toward the crowd with a limp. After the crowd sees Willy Wonka is a cripple, they all whisper to themselves and then become deathly quiet. As I walk toward them, my cane sinks into one of the cobblestones I’m walking on and stands straight up, by itself… but I keep on walking, until I realize that I no longer have my cane. I start to fall forward, and just before I hit the ground, I do a beautiful forward somersault and bounce back up, to great applause.

Why, you might inquire, did Wilder want his entrance staged this way? Because, “from that time on, no one will know if I’m lying or telling the truth.”

And lo, so it was written and so it shall be. Throughout the rest of Willy Wonka and the Chocolate Factory, Wilder wields sarcasm and wit, charm and curious quotations, but remains almost impossible to pin down. Much of that comes from Roald Dahl’s book and screenplay (the latter written with an uncredited David Seltzer), but some of it is pure invention on the part of Wilder. 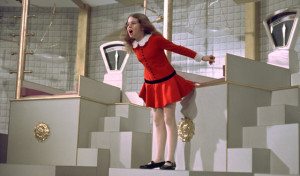 Who do you blame when your kid is a brat?

Throughout the factory tour, the kids fall prey to their weak characters in simultaneously comic and horrific fashion. Their parents and guardians behave just as poorly, if not more so. As Oompa Loompas cavort and chide, Willy Wonka shrugs and winks.

Everything turns out poorly. All of Wonka’s insane inventions and concoctions are misused by childish, greedy hands. This is what children are like. If only there were some other way…

If only there were someone with a sense of morality, someone inventive and clever and honest, why then the sky would be the limit—and not even that if you’ve got a flying glass Wonkavator, which it just so happens Willy Wonka does.

Watching Willy Wonka and the Chocolate Factory is a refreshing experience of wrong things that end up right and right things that end up wrong. It’s full of imagination gone full-tilt sideways and there aren’t any seat belts. Careful not to bite your tongue.

Cloudy with a Chance of Meatballs (2009) 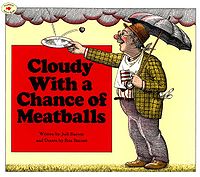 If you grew up reading Judi and Ron Barrett’s book, Cloudy with a Chance of Meatballs, then well, sorry. This film has almost nothing to do with the source material. On the other hand, it is one of the funniest, most satisfying, and most underrated animated features of the century thus far.

Yes, it is in 3D and yes, the last act does go a bit off the rails, but despite these failings I find Cloudy with a Chance of Meatballs to be consistently clever and hilarious. It is my kind of funny. 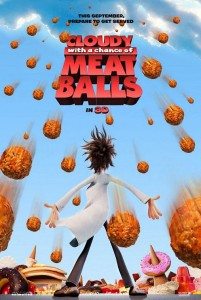 Directed by Phil Lord and Chris Miller (who also helmed the similarly funny and underrated 21 Jump Street), CwaCoM takes the disaster movie genre and slaps it playfully on the rump. It’s like Armageddon meets, well, Armageddon with a sense of humor and 20-ton pancakes.

We start with young Flint Lockwood (voiced by Bill Hader), a misunderstood boy with a passion for inventing: spray-on shoes, monkey-thought-translators, flying rats—you know, essential stuff. It all works, but no one appreciates his unorthodox efforts, mostly because they end up disastrously.

Flint lives on the tiny, sardine-centric island of Swallow Falls with his gruff, fisherman father (James Caan). As the sardine business gasps its last breath, Flint endeavors to save the town with his boldest invention yet, the Floyd Lockwood Diatonic Super Mutating Dynamic Food Replicator, or FLDSMDFR for short, which uses radiation to transform water into food. 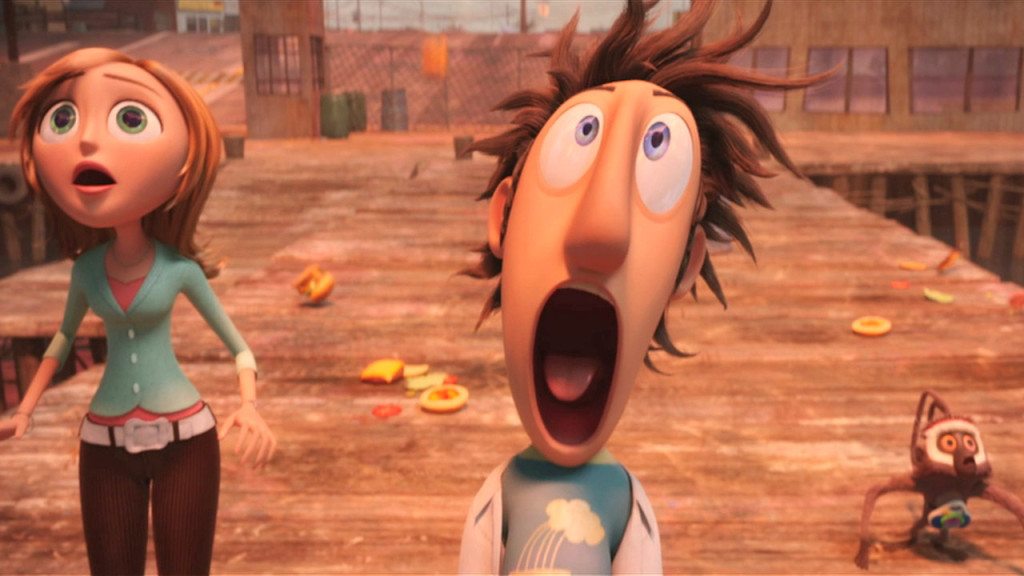 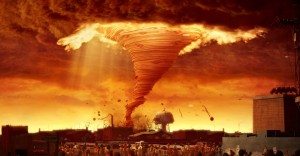 In Swallow Falls, spaghetti slurps you.

Anyway, to everyone’s surprise, the FLDSMDFR actually works and genuinely looks like it’ll save the town—until oh god it really won’t. But all that is just plot and you can probably guess most of the plot from the poster. Where CwaCoM shines is in the way it tweaks your expectations of films and genre. Lord and Miller, who wrote as well as directed, genuinely have a grand old time just goofing on the same old same old. It’s inventiveness about inventiveness.

There are feel good messages in the film, primarily about how being smart is smart (for girls and boys) and about how greed isn’t all that attractive, but the more substantial take away is exceptional visual and off-kilter humor.

JELL-O. Is it me you’re looking for?

Cloudy with a Chance of Meatballs finds that sweet spot well clear of the uncanny valley in terms of animation. Everything looks cartoony, and that’s just as it should be. People resemble actual humans as much as they do in films like The Incredibles. Giant JELL-O mansions, on the hand, looks exactly like that giant JELL-O mansion your neighbor is building. 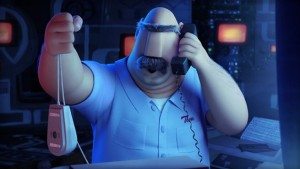 I swear I’ve been on tech support calls like this.

As the film ramps up its pace, it does end up in a long stretch that’s exhausting and chaotic. There are great bits in the third act—particularly those with Benjamin Bratt’s cameraman character Manny, and particularly not those with Samberg’s irritating man-child Brent—but if you need to run to the kitchen for a beer, this wouldn’t be a bad time. Following the big climax, Cloudy find its groove again and closes on a strong note carried by James Caan.

If CwaCoM leaves you wanting more, there is a creatively named sequel coming out in 2013, Cloudy with a Chance of Meatballs 2. While the main voice cast is all returning but Mr. T, Phil Lord and Chris Miller are neither directing nor writing. They’re too busy with the Lego® Movie, I guess.

Anyway hamster-chilluns’, I hope you manage this vastly entertaining double feature without hurting your giant eyeballs or damaging your innards with sugar overload. Feel free to binge on movies, however. I invented this device that makes doing so perfectly safe.