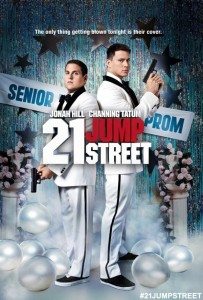 I never saw the television show 21 Jump Street. Not even once.

But I did see Cloudy with a Chance of Meatballs and I really liked it. And the trailer for the new Lego Movie looks funny in that same irreverent, improvisational, we’re all having a good time here way. Both of those films — and last year’s 21 Jump Street movie — were co-directed by Phil Lord and Chris Miller.

So I gave Jump Street a look.

I thought you would all like to know that it was, to my delightful surprise, genuinely funny. I laughed a bunch and didn’t care about or believe in anything that was happening in the best way possible. Something new! Something funny! What are the odds?

I know what you’re thinking. I’d also heard good reviews of this when it came out and rolled my eyes. But this one; I was in an irritable mood when it started and it ended with me feeling content. I even watched the deleted scenes.

And yes, I was a little drunk. 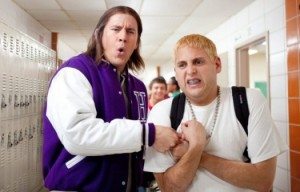 So what did I like about it? Well some actors are easy to empathize with and Channing Tatum is one of them. He’s also a lot funnier than White House Down would make you think. So you see him having a laugh and want to laugh along. He and Jonah Hill make good foils for each other, as well. I wouldn’t be surprised or disappointed to see the pairing repeated in other films. Hill isn’t as charismatic as Tatum, but I’m now willing to entertain the idea that my disinterest in him  has been due to his choice of material and not necessarily a lack of ability or commitment on his part.

Or perhaps Lord and Miller just know what they’re doing, humor-wise. I appreciate a comedy that can laugh at itself without being one big nudge in the ribs.

21 Jump Street is a film based on a television program and it knows it. It doesn’t have any pretensions about being anything other than a lightweight comedy. As far as I could tell it also felt no obligation to maintain any connection with the television show. It jumps into it’s fish-out-of-water tale as soon as possible and almost immediately thereafter turns your expectations on their head with an unexpected and preposterous twist. That’s a clear signal of what you’re in for and enough to endear you to the whole endeavor. 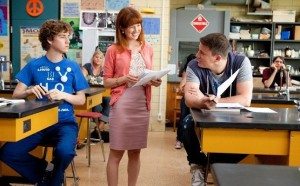 I think I dropped my pencil

I found it endearing, at least. Sitting on the couch with the Dr. Mrs. knitting away, just looking to tune out for a while, we both ended up being completely content with 21 Jump Street. After being told that film after film would be hysterical and watching them to discover that they were just crude or insulting or lame rehashes of what had gone before, this one won me over.

I share it with you. If you’re not quite feeling up for the Bergman film that’s been staring at you from your coffee table for a month, you could do a lot worse.

It’s not a spoof and it’s not a reboot. It’s just a riff on a dumb theme assembled by people whose — shocking — primary goal seems to be having a good time.

Ellie Kemper is adorable, Ice Cube is terrible, Rob Riggle is Rob Riggle, and there are other actors in it too! Many of them.

Now that I think of it, it reminded me a bit of Kings of Summer in its lackadaisical attitude and willingness to see where any given scene might go. Can’t put no cuffs on comedy.

Rent 21 Jump Street. If it does really well, maybe Channing Tatum will stick to films like this and leave the explosions to people better suited to saving the world from CGI.