Surely we’ve all had times in our lives when we’ve feared suddenly turning into a wardrobe or a foyer or a driveway or a blender or what have you. It might happen at a moment’s notice, and then what? There’s nothing for it. Chin up, lad! It could be worse. You could be Belgian. 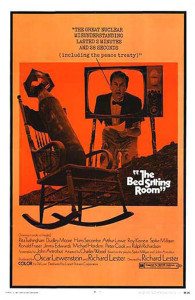 The post-nuclear-holocaust movie The Bed-Sitting Room is about, among other things—which things I’m more than a bit foggy on—one man’s fear of turning into the room of the title. I think it’s reasonable to tell you without ruining your viewing experience that this man, Lord Fortnum of Alamein, played rather brilliantly by Ralph Richardson (later player of, notably, The Supreme Being in Time Bandits), does indeed turn into a bed-sitting room midway through the film, in which room Mother (Mona Washbourne), who, rather than being dead—as her death certificate clearly attests—has become a wardrobe, finds herself. She and Lord Fortnum conclude it best not to chat, given the unfortunate circumstances.

Meanwhile—no, wait. There is no meanwhile. Who am I kidding? The Bed-Sitting Room features a small cast of renowned British actors and comedians, listed by height in the credits, wandering around a post-WWIII wasteland that was once London or thereabouts, which war lasted two and a half minutes, including the time it took to sign the peace treaty, as related by what remains of the BBC (see poster). There are no buildings nor anything else left, just strangely colored, desolate landscapes, some covered entirely in broken pottery or giant piles of shoes. 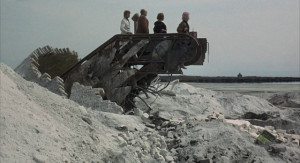 There is one surviving structure: the tube. One older couple and their 20-something daughter live in one of the cars. The train is fully functional, powered by the man on the bicycle/electricty generator contraption who, one presumes, doesn’t get much sleep. This couple is shocked to find their daughter, Penelope, spending her nights one car down with a young man, Alan. Nevertheless, the four of them embark on a journey above-ground to the wasteland, hauling with them a piece of luggage in which another man, Nigel, is sleeping (long story), which adventure will result in, among other things, Mother turning into a wardrobe and Penelope giving birth to a monster. 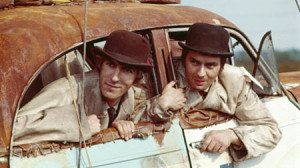 Moore and Cook as the local constabulary

Dudley Moore and Peter Cook, the local police, fly about in their makeshift air-balloon damanding that everyone move along, move along, for after all, they’re British, by gum, and that’s the British way, to soldier on no matter the odds.

Which is certainly a large part of the humor, watching these (let me count) seventeen survivors of the apocalypse keeping their spirits high in the face of rather daunting odds. It’s all so very British. They break into song a few times, singing “God Save The Queen,” though with the words changed to “God save Mrs. Ethel Shroake of 393A High Street, Leytonstone,” as she’s next in line to the throne. 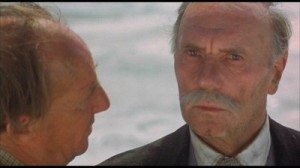 Lord Fortnum, prior to becoming a bed-sitting room

It’s probably best not to think too deeply on what the movie is getting at besides that. Laughing at nuclear annihilation is certainly a worthy endeavor, as Kubrick showed us in Dr. Strangelove. But while Strangelove had much to say on the absurdity of nuclear war and politics, not to mention a coherent story in which to say it, The Bed-Sitting Room has absolutely nothing resembling a story or plot or really anything at all directing the proceedings. The characters wander. They do things. Then they do other things. 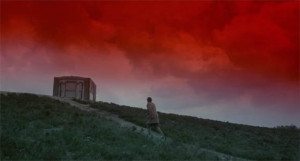 It’s based on a  play by Spike Milligan and John Antrobus. One can see how this would make a bit more sense on the stage. Then again, maybe it makes exactly as much sense. 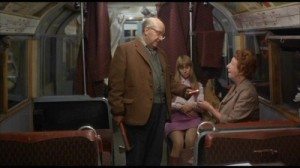 Yes, you’re saying, that’s all terribly interesting, but is it any good? I can say unequivocally that it is quite probably not at all bad. Also, it is funny. Some of it, at least. Some of it is very funny. Some of it is less funny. Some of it taxes one’s patience. All of it is not particularly like anything else, though it’s something like Monty Python and similar British wackiness from the era. Should you see it? But of course! It’s a strange, unique, forgotten film. In fact, you must see it. Because you like the strange and forgotten. That’s why you’re here, after all.

The Bed-Sitting Room is directed by Richard Lester, best remembered for directing two Beatles movies, A Hard Day’s Night and Help!, and one and a half Superman movies, Superman II (in part directed by Richard Donner before he was fired) and everyone’s favorite, Superman III, the less said about which the better (it’s the Richard Pryor one, if you’ve forgotten). Lester, at least in the ‘60s, was, like many in the era, fond of the odd and experimental. The Bed-Sitting Room is surely one of his weirdest experiments. Kind of like Head, actually, the Monkees movie that riffed on Lester’s Beatles movies and was otherwise an impenetrably weird late ‘60s excursion into stream of consciousness out-there-ism (which word I’ve just invented and rather like, thank you very much). 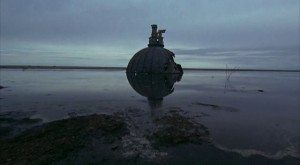 The cast, which includes Marty Feldman in his film debut, is stellar. They give it their all, which helps immensely. Richardson and a number of others act as though in a very serious movie indeed.

Another impressive aspect is the look. Clearly they didn’t have a ton of money to work with. It’s a minimalist future. But the wastelands are strangely beautiful and evocative. The simple use of colored filters give ponds and the sky a scary radioactive glow. Its look surely influenced the post-apocalyptic movies that followed it, such as A Boy And His Dog and The Road Warrior.

Does it have a happy ending, you ask? I’m going to say yes. But don’t take my word for it. It’s possible it has no ending at all. 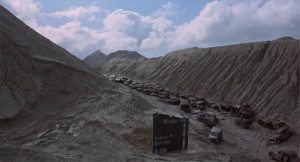 bit of a traffic jam on the roads