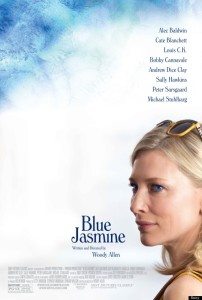 Blue Jasmine is not an enjoyable movie. It’s about a mentally disturbed, irritating, irrational, miserable woman who, over the course of the movie, changes not at all. She’s exactly as awful at the start as at the end, which isn’t necessarily a bad thing in a movie character, if, for example, the movie has something to say about the unchanging nature of the character’s awfulness, but Blue Jasmine doesn’t, nor does it have anything to say about anything else. It’s a dull exercise in by-the-numbers movie-making Allen has become all too efficient at executing, one per year, ad nauseum.

I wrote a list of Woody Allen’s ten best movies some months ago  in which I pondered whether the then-shooting Blue Jasmine would or would not completely suck. The answer? It doesn’t completely suck! Hooray! What’s good about it? As is often the case in Allen’s movies, the performances. Cate Blanchett literally eats the scenery in her protrayal of the nutso Jasmine, creating a three-dimensional portrait of a deranged women cracking up. The portrait doesn’t actually resemble anyone in the real world, but for an imaginary “crazy neurotic rich lady only found in the movies,” she nails it. 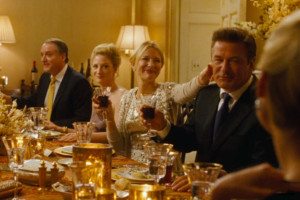 Happy days of being rich and awful

The set-up is that Jasmine’s rich husband is arrested for lying and cheating etc., goes to jail and hangs himself. Poor Jasmine flees NYC to San Francisco to stay with her working-class sister, Ginger (Sally Hawkins), who lives in an awesome SF apartment that to Jasmine looks like a dump. Well, it is on South Van Ness, for god’s sake, so there’s that for verisimilitude.

Ginger is dating Chili (Bobby Cannavale), a street-smart working stiff disparaged endlessly by Jasmine. Because he’s poor, you see. As you might imagine, it turns out that Ginger and Chili, living their modest yet honest lives, are in the end shown to be happier than once-rich Jasmine. Who could have seen that coming?

Everyone. This movie is so thinly scripted you can see right through it. The scenes are all brief sketches of exposition, as bad as any Hollywood spectacular, but with that certain Woody Allen witiness. Is it funny? I chuckled twice. Mostly I cringed and wished everyone would quit yelling their bad expositional dialogue. 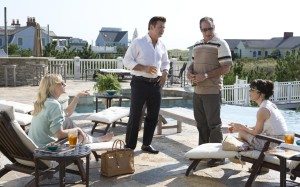 Never trust a Baldwin, you guys

Jasmine’s adventures in SF are intercut with scenes from her prior rich life in NYC, presented as a bizarre and unrealistic cliché of horrible rich people being horrible and rich. Alec Baldwin plays Jasmine’s husband. He has nothing to do but squint and act mean. Aside from Jasmine, who is at least uniquely awful, all of the characters are one-note cliches, including Ginger’s ex-husband Augie, played by one-time comedian Andrew Dice Clay. He’s getting rave reviews for, I guess, not being as awful as you’d expect? Or something? Anyway, he’s fine in his three scenes and ten minutes of screen time.

Louis C.K., on screen for maybe five minutes, feels like the only actual human being in the movie. Everyone else is a Woody Allen caricature. 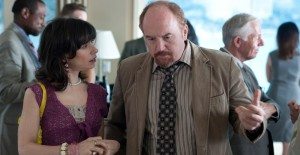 In SF, Jasmine takes classes to learn how to use a computer. So she’s, what, 40-something? And never in her life used a computer? Got it. She wants to meet men, so a random woman in her class invites her to a party. Wouldn’t it have been wonderful if Jasmine was taken to a typical SF party? Some kind of wild, Burning Man related freak-show? What a fascinating clash of cultures that would have been. 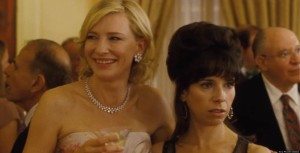 But no. She’s taken to a magical rich person party. Where she meets a guy (Peter Sarsgaard) who falls instantly in love with her, and he’s rich, and he has a new house that needs decorating, and Jasmine claims to be an interior decorator, and days later he asks her to marry him, but when they go to buy a ring, who should appear out of nowhere for no reason at all save plot-advancement but Augie? Who yells at Jasmine, thus revealing all of her lies to the new guy, who literally dumps her out of his car on the side of the road. 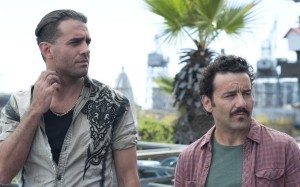 I’m sorry, have I given too much away? Believe me, five minutes into this thing and you’ll see everything coming. There’s not a single surprise in here, save one: how Jasmine’s husband came to be busted, a big reveal at the end. It seems to shed all kinds of new light on Jasmine, and yet…you think about it and…well…no, actually, it doesn’t shed any light on anything.

The world the movie takes place in is as imaginary as its main character. Remember the movie-within-a-movie in The Purple Rose of Cairo? The story of an Egyptologist whisked away to New York by wealthy elites who drink martinis at impossibly fancy clubs, it parodies the kinds of movies Hollywood made in the ‘30s, all brimming with rich socialites reveling in their expensive furs at black-tie parties in lavish apartments. Woody Allen has finally become his own parody. His characters could exist nowhere but in the movies. His idea of San Francisco is laughable. We give him a pass when his movies are set in New York—hey, at least he lives there, and he is a rich movie star, maybe this world is all he knows—but transplant that world to another, very different city, and it couldn’t be any more tone-deaf. The movie has nothing whatsoever to do with San Francisco. Without changing a single line of dialogue if could have taken place in any city in the world, and been exactly as unbelievable. 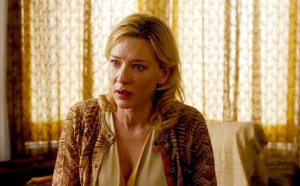 If you were kind, you could call this movie a “character study.” Many famous directors, mostly European, have made many such movies, movies in which plot or even story takes a backseat to the central character, where the point is to inhabit one person’s life, to get so deeply inside of them that greater human truths are revealed.