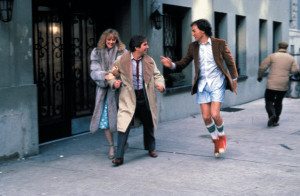 It’s not often I go around seeing, let alone enjoying, films directed by Ron Howard, but what do you know, Rush is a mostly enjoyable movie, stylish and well-made (and not to be confused with Rush (’91), the one where Jennifer Jason Leigh and Jason Patric do a lot of drugs). Is it his best movie? Is it better, even, than Night Shift? It might be. But I’m not going to fall on the grenade of re-watching Night Shift to find out. Let’s say it’s his best movie since Apollo 13, which I understand people rather like. I can see why, but I only sort of half enjoyed that one. It suffers the then-standard trademarked Ron Howard Ending of going slo-mo for five minutes with weepy strings on the soundtrack until you choke on your own syrupy vomit. 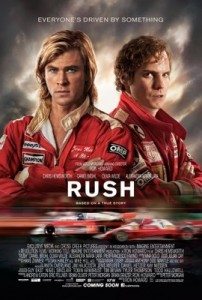 There’s a similar sequence toward the end of Rush when the build-up to the start of the final race is stretched almost to the breaking point, but like all of the other standard Hollywood moments in the movie, it’s handled well enough that you almost don’t notice you’re watching a standard Hollywood moment. In a world where something as obvious and awful as Argo wins a Best Picture Oscar, this is actually a grand achievement.

In its construction and subject matter, Rush is absolutely a standard Hollywood sports-rivalry picture. Two men vie to be world champion of Formula One racing in the mid ‘70s. One is a blonde, British, gregarious partier, the other a diminutive, intelligent, deadly serious Austrian. They’re bitter rivals on the track, but they’re the two guys at the top of their game, so off the track they’re friends. Most of the dialogue is either expository or carefully crafted to Reveal Character in ways far from subtle. Some races are shown in detail for dramatic effect, others are glossed over in montage. And it all comes down to the final race of the season where the world champ is decided. 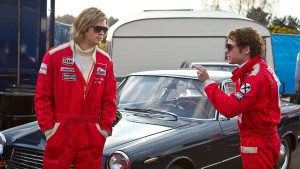 And yet for all that standard issue plot, the whole movie is handled remarkably well. It helps that given the true story it’s based on, the filmmakers actually had to cut out dramatic incident to fit the story into one movie. It’s that rare case where Hollywood didn’t have to invent drama to beef up the actual events.

Which actual events, in brief, concern Brit James Hunt (Chris Hemsworth) and Niki Lauda (Daniel Brühl) as they rise from Formula Three drivers to the big time in Formula One, Lauda driving for Ferrari and Hunt for McLaren, the top two Formula One car manufacturers, and the events of the ’76 racing season. Which are absurdly eventful, including Lauda almost dying when he his car crashes and burns midway through the season. That’s right, midway. He misses races, but returns in time to fight for the title. It’s kind of nuts, this story. 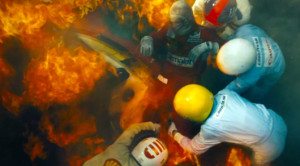 That has got to hurt

Impressively, the movie manages not to side with either racer. Hunt is the obvious focal point, being a fun loving party guy, and at first it feels like he’s the focus, sort of the Mozart to Lauda’s Salieri, except in this case, on the track, Lauda is equally if not more exciting to watch than Hunt. As the movie plays out and we learn more about Lauda, he grows more and more likable despite his unlikeable personality. He ends up being the heart of the movie. 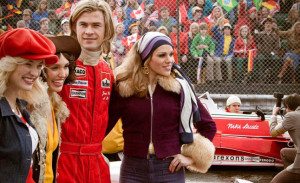 Hunt and the ladies, with Lauda peeved in the background

With that said, I wish there had been more naturalistic conversations between the two men. I’ve since watched a short documentary on the youtubes about the ’76 season, and footage of both men at racing parties shows Lauda as considerably more social and good natured and talkative than he’s portrayed in the movie. Their movie conversations are all very pointed in playing up how the two men are such contrasting personalities. Which goes back to this being a Hollywood kind of movie. It’s not subtle. Nothing is hinted at; everything is said. Usually multiple times. 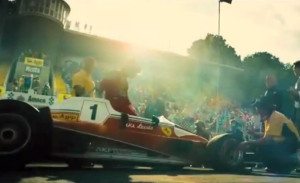 the racetrack washed out by the sun

And yet…and yet…it still works. In terms of visuals, this is certainly not a throwback to ‘70s cinema. It’s a modern movie in every way. It’s got style, and a unique style at that. I’m not quite sure how to describe it. Of course all the action is presented with fast editing, as is the norm, but it’s not a distraction as it so often is in action movies. There’s a fluidity to the editing, which you’d hope for in a racing movie. The color scheme is full of reds and grays. It’s almost like it’s washed out and oversaturated at the same time. Which maybe it is a throwback to the ‘70s in that sense, but if so, it’s the ‘70s seen through a ’13 lens, literally. Let’s say it’s reminiscent of a ‘70s look without being at all imitative. 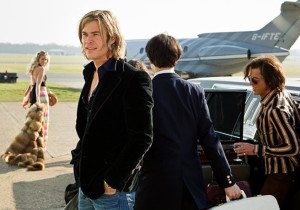 Hunt and his pals

I’d only ever seen Chris Hemsworth as Thor in The Avengers, where he’s forced to wear what look like $5 tights from a Halloween pop-up. I had no idea he was a real actor. He is. He gives an honestly good performance in Rush, and not like in a Brad Pitt movie where you say, “he was good—for Brad Pitt.” I mean Hemsworth is genuinely good. Brühl is even better as Lauda, creating a character who you end up liking despite being so unlikeable.

Now after saying all those nice things, I admit I didn’t exactly love the movie. Overall, the simplification of characters and events to fit a standard Hollywood package kept me at a bit of a distance, as did way too much on-the-nose dialogue. But at least it’s good on-the-nose dialogue. Or is that an oxymoron? Well. I trust you have a sense of what I mean. 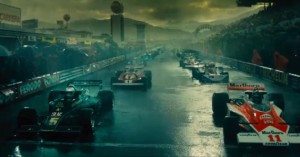 The final race, in the pouring rain

Rush is a consistently engaging movie, which for a Ron Howard movie kind of blows me away. I didn’t think he had it in him. Is it because he decided not to shy away from an R rating? There’s nudity and some ghastly racing accidents portrayed in here, not to mention Lauda’s accident and hospitalization, parts of which are seriously hard to watch. Maybe Howard should consider going deeper into his dark side and seeing what emerges. He might come up with something even better than Rush.