And so, with an ambiguous ending as strange as the Twin Peaks finale and as open to interpretation as The Sopranos, Breaking Bad—

No, wait. Everything in Breaking Bad is wrapped up neatly. As it should be. Breaking Bad has long charted a specific course. An ambiguous, thread-hanging ending was never going to work for this show. If you can fault it for anything, it’s for being wrapped up almost too neatly. When has anything Walt done worked this perfectly? 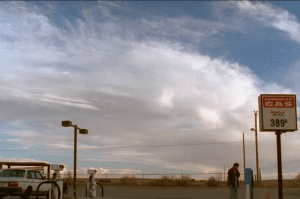 Walt puts his plan into action

The finale (“Felina,” an anagram of “finale” and a name in the song El Paso, which Walt plays in the car in the opening scene) is a haunting episode. Walt, essentially a ghost, drifts from scene to scene, wrapping up business, either killing people or making one last attempt to aid his family. Everywhere he turns up, nobody notices him, not at first. He looks terrible. “But I feel good,” he points out. The creepiest scene of the hour is his visit to Gretchen and Elliot. He follows them inside their stupendous new house, looks around the place, checks out some photos, mere feet from his erstwhile friends, until Gretchen spots him. Is he going to kill them? Lecture them? Nope, it’s only Walt’s last-ditch effort to get his money to Junior. Will it work? It might. He plays on their guilt…then threatens them with death by expert hit-men. Who turn out to be Badger and Skinny P with laster pointers, the one funny moment of the episode. I’m glad these two showed up one last time. Both to see them off, and because this episode surely needed one laugh. 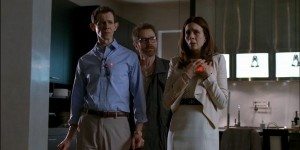 Targeted by Badger and Skinny P

Walt materializes in Skyler’s kitchen, after Marie warns her on the phone that he’s in town and has been seen everywhere, like a mythical demon. His gift to Skyler is the lottery ticket with GPS coordinates to Hank’s grave, which info will make the feds happy? Maybe? Seems like pretty thin gruel for the woman whose life he destroyed. He does give her one real present, though. Everything he did, he says–and like her, we know what’s coming and don’t ever want to hear it again–only then he doesn’t say it. He did it for himself. He actually admits it. Now that he’s dead, I guess he can stop lying, to Skyler and to himself. He did what he did because he liked it, and because he was good at it. 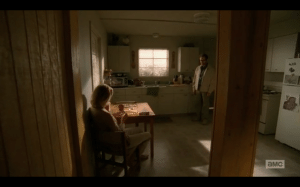 Which I’m not so sure about that last part. Was Walt good at being a drug kingpin? Seems to me his ego and paranoia ruined him as he rose to the top. He was never Gus. He was never content.

Walt creeps up on Lydia and Todd at Lydia’s favorite cafe, poisons Lydia with ricin, and gets himself invited to the neo-Nazi hideout. With Lydia endlessly asking for more Stevia, I suppose she was destined to get the ricin, though it felt a bit anti-climactic. I guess because she posed no immediate threat of any kind. Why does Walt kill her? Out of spite? Because she sold his meth without his approval? Because she’s so annoying? I’m going to go with the last option. She really was a pain in the ass. She had to go. I think I just wanted the ricin to be used in a more meaningful way, or a more poetically justified way. At least it was used. Someone had to die from it.

Did Walt plan on killing Jesse up until seeing him in chains? He knew Jesse was cooking the blue, and doing it with Todd and Uncle Jack. He calls Jack and Jesse partners. Did Walt know they were anything but? Whatever the case, Jack brings in Jesse to show Walt what’s what. Seeing Jesse in chains, Walt throws Jesse to the floor before triggering the machine gun. It kills damn near everyone in an impressively violent bloodbath. Which is another thing the show’s been promising, ever since the beginning of season 5 when we saw the gun. 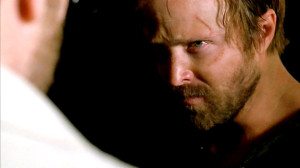 As expected, Jesse gets his revenge on Todd, chokes him with his chains. And then, a chance to revenge himself on Walt. Walt tells Jesse to do it, to shoot him. Jesse tells Walt to say it’s what he wants. Walt says so. But Jesse’s done doing what Walt wants. Not killing him is an act of defiance, of refusing Walt. “Do it yourself,” says Jesse.

And he does. Or rather, he did. One of the bullets from the machine gun ricocheted into Walt’s side.

Jesse drives away cackling with mad glee. The one man who gets out of this show alive. If anyone deserved to survive this mess, it was Jesse. The flashback to the time he built the wooden box is a nice touch, the one thing in his life he put real time and effort into, which box, as he related back in season 3, he later traded for drugs.

Walt also gets a flashback, briefly, in his trashed house after retrieving the ricin, of the party in season 1, episode 1, where Hank offers to take Walt on a ride-along to a meth bust. Happy times.

Walt dies in the meth lab, there with the shiny tools of his trade. He loved the chemistry most of all, more than his family, more than himself. Rests a bloody hand on a vat, sees his reflection in it. The cops arrive, but he’s already gone, dead on the floor. The music cue here is a song called “Baby Blue” by Badfinger, and I have to say, despite the all too apropos lyrics, I kind of hated it. Moodwise, it really killed the moment for me. I’d have preferred silence most of all. A last few quiet seconds to observe what Walter wrought.

I’d say the real emotional climax of the show came two episodes ago with “Ozymandias.” These final two episodes were more a long denouement, a tying together of the remaining pieces. The show needed it. We needed a couple hours to unwind, in a sense. To unwind with some unbearable tension, strangely enough. 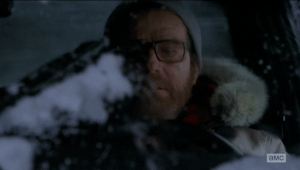 Looking back, Breaking Bad is shaped a lot like a novel in three parts. Part I is seasons 1 and 2, with Walt far from being a drug kingpin. He’s hardly very evil at all, until he lets Jane die. He’s acting out here, flailing most of the time, paniced and desperate, not even realizing to himself how much he loves the person he’s becoming. Walt’s actions eventually lead, however indirectly, to the planes crashing and a hellfire of the dead raining down on his head, a warning of what’s to come.

Part 2 is seasons 3 and 4, wherein Gus asks Walt to work for him, and over two excrutiating seasons of slow-building tension and dread, Walt not only starts working for Gus, but plans almost from the outset to kill Gus before Gus kills him. It’s a close call, but in the end, Walt beats him. These two seasons are slow and deliberate, and I think the best part of the series.

Part 3 is the long season 5, and it’s paced very differently than the rest of the show. The first half of the season charts Walt’s rise to creating a smooth-running operation. The episodes are heavy on plot, with each episode representing a problem that needs to be solved. It ends with Walt on top–and with his one fatal mistake discovered. The second half of season 5 is a mad, headlong rush into death and destruction. In a typical action oriented two hour movie, you expect the last fifteen minutes to be insane. In the 62 hour story that is Breaking Bad, that fifteen minutes works out to eight hours, and that’s what we get: a non-stop, action packed eight hours that never let up.

All together, these three very different parts add up to a whole that fits together perfectly. I’ve never seen a show that felt more carefully and thoughtfully crafted.

As for the ending, it left me feeling sad and worn out. Which seems all too appropriate. No one knew how it would end, not exactly, but the show itself laid it all out long ago. The particulars we couldn’t guess, but in general? We’ve always known where this was heading. To see it play out evokes a kind of sadness in it playing out as it had to: Walt spiralling out farther and farther until destroying everything he ever loved, and dying. The end.

Was Walt a good guy? A bad guy? A monster? All three, and more besides. He was a beautifully realized, deeply complex character. He was many things, often at the same time. In the end, by admitting he did what he did for himself because he liked doing it, I think Walt’s psyche was, for the first time, at peace. He spent the whole show at war with himself. His uncertainly at who he was and what he wanted to do is what led to all of his troubles. By accepting, at long last, himself, he was able to die. Walt was a chemist. A great chemist. That’s all he ever wanted the world to know.

Goodbye, Breaking Bad. It’s been wonderful. I’ll revisit you again once I recover from having seen you this time. So, yeah…a few years. At least.