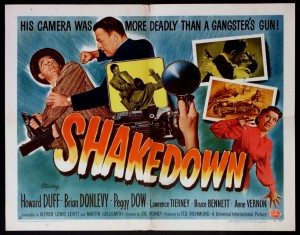 And so here you find me, scouring the internet, looking for a copy of the generally unavailable 1950 film noir, Shakedown. The Supreme Being saw it at a Noir City screening and put it on our I Like to Watch list. It is the last film on that list of must-see films which I have not seen.

And then here’s me paypaling some dude $10 to send me a DVD-R that contains the cinematic artifact in question—likely recorded off television or transferred from an old VHS tape—so I can perform my holy observational duty.

Then, presumably, Supreme Being will feel challenged to add other obscure, rare, and curious titles to our list for me (and you) to screen and consider.

This is the way of the world. And it is good.

When we started putting together the I Like to Watch list over a year ago, I thought of it as a collection of great films. Of films that—whether you enjoyed them or not—you’d appreciate having seen. They are variously engaging, informative, perspective-shifting, wonderfully horrible, liberating, and/or likely to cauterize key sections of your frontal lobe. If you don’t know what to watch, well then: here. These are all good films to rent or stream or catch at your local revival theater. 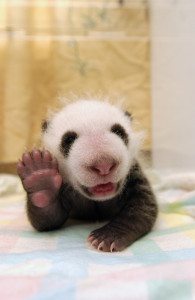 Hello. I am a baby panda. Now give me five bucks.

But saying that they’re good; what does that even mean? Good is the most tepid possible word. It means almost but not quite absolutely nothing. It is a subjective indicator that the described thing enjoys an absence of badness. This coffee cup, this baby panda, this moment of light of summer breeze—they are all good. So is the feeling of ceramics crunching underfoot and the moment the leaf blower stops hollering.

In the codification and ranking of all the world’s elements, there are good things and bad things. Should films be good things?

Let’s take Shame, Ingmar Bergman‘s 1968 film exploring the effects of war, as an example. This was the penultimate unwatched film on our list—and one I’d been avoiding for a few months. I’d watched Bergman’s Through a Glass Darkly and Hour of the Wolf and needed a break from poetic Swedish psychological dramas. 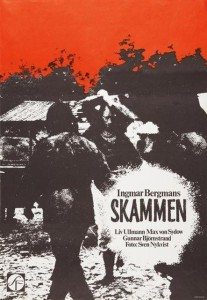 For a Bergman film, Shame is quite exciting with explosions and gunfire and Liv Ullmann’s astoundingly entrancing freckles. Naturally, the male lead is brought to life by Max Von Sydow’s crepuscular presence.

Unfortunately, the copy I had was the dubbed version, so both actors sounded like pledge drive phone operators. This is occasionally the price of doing business.

Was Shame good? I don’t even know how to answer that question. The experience of watching it was beautiful and painful. It was abrasive and lyrical and tedious, too. Bergman drops his actors into crystalized situations, manipulating their ordinary irritation with each other to levels of piercing shrillness and bottomless despair. He does this with violence and suffering. He does this with personality. 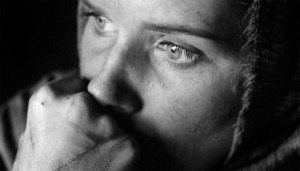 Dear Liv Ullmann’s freckles. Will you marry me?

As one watches Shame, one steeps in cowardice and brutality. These people, in these situations, are loathsome. They destroy their world and the world around them. They are not good. They are trying to help themselves and occasionally even others, but ‘shame’ is the title of the piece and shame is its subject.

It is a meditation on the crucible of war. It is thought-provoking and moving but it is not good. It is not trying to be good. It is trying to move you to contemplation and emotion and in that it succeeds. 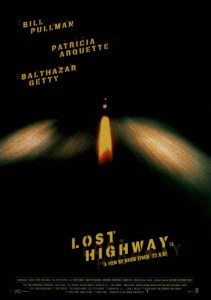 The other film I watched recently was David Lynch’s Lost Highway. Here’s what happens in that picture: people become other people, things explode backwards, Patricia Arquette changes her hair color, Robert Blake is there but not there, and tailgating is punished severely. I would like to tell you that I have something beyond a vague sense of what the film was about, but I do not.

As with much of David Lynch’s work, there is a lot to appreciate in the film. No one can make an empty living room more terrifying. No one can inject more asphyxiant into your dreams. It is also made from and for madness. Is that good?

Well, I enjoyed watching it. There are moments in it that will stick with me. But in the grand war between all that is evil and all that is good I think Lost Highway is batting for the away team. It unsettles. It rends. It offers to disturb you and carries through.

I think it is not a good film. I am unsure whether or not it is a great film.*

I am glad to have seen it. The thing is: I like to watch.

And now, after my DVD-R of Shakedown arrives, I will be lacking a map of where to point my eyes. What should I watch next? What isn’t any good at all? You tell me.

*So maybe Ron Howard’s Rush is good? Maybe that is even praise?

3 responses on “Shame and Lost Highway are not Good”