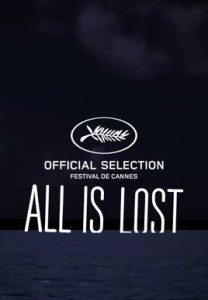 J.C. Chandor’s All Is Lost stars Robert Redford as ‘Our Man.’ That is the total and complete cast list. The character is not named as no one speaks to him for the entirety of the film. Not a soul. It is a solo voyage, without gimmick, and that’s exactly how it feels.

The feeling is like a coming up for air when you’re not sure if the anticipated breath will be your first or last.

If you want to see what Alfonso Cuaron’s Gravity should have been, just watch All Is Lost and imagine Our Man in space. Compare Redford’s subdued performance and the unfolding of his personal disaster to the more-impressive spectacle of orbital fiasco and the nattering of Sandra Bullock.

First, take a moment to name all the feature films you’ve seen that have only one actor. Wracking my brains — without asking the internet — I come up with one, and it’s a cheat: Spaulding Gray’s Monster in a Box, in which he performs one of his monologues. I’ve seen a mess of two-handers, including Gravity (which has a couple of extra voices but only two actors) and Boorman’s excellent pairing of Toshiro Mifune and Lee Marvin in Hell in the Pacific, but just one human on screen in a bona fide feature? Drawing a blank.

Even the internet has limited experience with true solo shows. Some suggest Moon, Duncan Jones’ enjoyable sci-fi drama, but that’s got Kevin Spacey as a computer voice and other personalities for lead Sam Rockwell to bounce off of. In fact, most one-man-films that people mention feature other voices, whether they’re on screen or not, and that means another actor. Some films have bookend segments with other characters, such as Cast Away or 127 Hours. Secret Honor, which is on my list to see, is like Monster in a Box; a staged monologue starring Phillip Baker Hall as Richard Nixon unraveling. Buried had Ryan Reynolds in a coffin and that’s a cool concept — but the film is mostly him talking on the phone.

Even Monster in a Box has Gray performing to an audience. Not so in All Is Lost. There is a moment when Our Man’s radio almost works, and crackly voices are heard speaking foreign tongues, but that’s it. No one here but us ghosts.

As a feature film, it is a stunning achievement and only partially due to Redford’s unsupported time on screen. The other mesmerizing aspect — and what truly sets All Is Lost off from a gorgeous but vacant film like Gravity — is the control of Redford’s performance.

When no one is around to see you, there is no use in wailing or thrashing about or even praying aloud. You see what has befallen you, you take stock, and you do what there is to be done or you die. This is how Our Man behaves and it is quietly shocking for its authenticity. 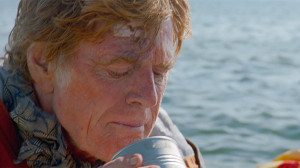 Bolstering Redford’s focused performance is J.C. Chandor’s equally ascetic script. Where in Gravity, everything that can go wrong does, and every occurrence is flayed for potential dramatic impact, in All Is Lost life is tense enough without exaggeration.

The film begins with delicately muted colors of sea and sky. Our Man is reading from a letter he has written — and this is the only voice over in the film and about 99% of the words you’ll hear spoken aloud. Then the camera floats past a hulking object that we eventually recognize as a container fallen adrift from a giant transport vessel. Nothing is amped; in fact the color, pace, and the performance all feel resigned.

From here, titles skip us back eight days and into the middle of the Indian Ocean. Our Man sails his 39′ yacht without companion. Asleep below, his boat collides with the rogue container, puncturing the hull just above the waterline. This is the start of his troubles. 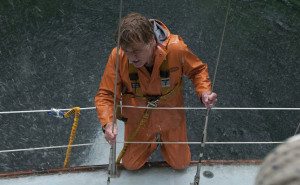 It is our introduction to the aged sailor, looking every day of Redford’s 77 years. It is our first sign that we are going to see something normally kept hidden: one’s private reaction to setback. If you can, step outside yourself now to picture your behavior at a time of solitary crisis. Are you blasé like George Clooney’s Matt Kowalski in Gravity or are you on the verge of hallucinatory panic like Bullock’s Ryan Stone?

Thousands of miles from anyone else, with your radio spoiled by seawater, who are you acting for? I suspect we either behave like Redford’s sailor or we’re fish food.

J.C. Chandor proved that he understood how people interact in his taut financial disaster film Margin Call; here he proves he can likewise be honest about how people behave on their own. He stays remote, allowing the gravity of the situation to carry its own weight without spectacle. As each added complication arrives in All Is Lost, they feel honestly unforced. If anything, you wonder how things could go so well for so long. 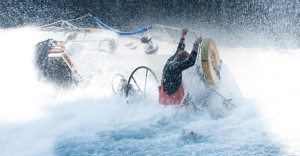 This allows you to create your own tension with which to flavor the picture. Being authentic, this tension cannot be escaped with a shake of the head. It cannot be soothed either, even though Alex Ebert (frontman of Edward Sharpe and the Magnetic Zeroes) tries with a score that is as lullingly deceptive as the sea. Time and again I’d wrestle my clenched jaw open to realize the music, far from ratcheting up my angst, was doing what it could to keep me calm. Telling me to give in.

I’d be thinking, “and this is when the sharks come,” but they wouldn’t. Our Man makes no blunders of note. He simply perseveres, as there is no other living option.

The other thing to think about with any disaster film is how events such as these conclude. You can take Gravity as an example, or nearly any other of the genre. There are characters we care for. A crisis strikes, turning their world to turmoil. They struggle to survive and, almost always, manage to somehow, miraculously survive, perhaps with their child or sweetheart or dog (or dog-sweetheart if you’re watching a Harlan Ellison film). 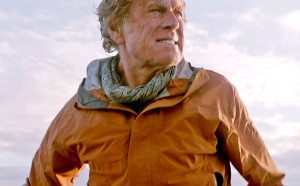 This is not how most people experience true disaster. Most people see their world turn to turmoil and then die. We cannot all be Gene Hackman in The Poseidon Adventure. Most of us must go down with the ship or it isn’t a disaster in the first place.

There is some controversy about the ending of All Is Lost for this reason. Would Our Man survive an ordeal such as the one he faces in this work of fiction? I’m not saying he does: there is no spoiler here. I’m only posing the question for you.

As you watch All Is Lost, and you should, ask yourself if you’d survive. That is the film. Ask yourself if untrained astronaut Ryan Stone survives round after round of bullet-like pieces of satellite shrapnel to pilot various crafts with controls configured in unknown languages to finally find her feet beneath her.

All Is Lost takes its lonely, alternative, authentic course. You may find the ending jarring, but take the time to consider what you’ve seen and what you see. I feel the conclusion marks a turn for the picture, but not in the direction one might originally assume.

There is one moment in the film that keeps coming back into my head. Robert Redford has finally written the letter that he begins the film reading aloud. He places it in a jar and twists the lid as tight as it can go. His arm swings back for a mighty throw, aiming to send his thoughts out to the world. But then he stops. What difference how far his strength will carry anything? He simply lets the jar fall into the water.

I’m sorry. I know that means little at this point, but I am. I tried. I think you would all agree that I tried. To be true, to be strong, to be kind, to love, to be right. But I wasn’t.

6 responses on “All Is Lost: Get a Good Dose of Anti-Gravity”