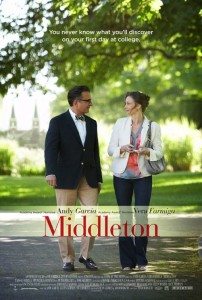 At Middleton, the first film from writer/director Adam Rogers, perfectly captures that feeling of your children going off to college—but only if you don’t actually have children, or know any children, or have ever been a human child.

During the course of this one magical day at Middleton, the parents ditch their offspring, step away from their lives, and—could it be?—fall in love.

There is enough in this trite, treacly plucked peacock of a film to keep a man from walking out, but only just. Andy Garcia isn’t consistently terrible, but his character George is, gallumphing up staircases with an exaggerated then absent fear of heights; buying his clearly unrelated son a necktie to establish the dork chrysalis he will soon shed to become a marginally less preposterous archetype. Vera Fermiga brings emotional rawness to Edith, a woman clinging to her daughter as a shield against emptiness and, if we’re lucky, terrorists. We are not lucky, though.

If only Edith were at all believable. If only Edith and George having the slightest interest in each other was at all believable. If only one didn’t feel so depressed watching them fall in love and—as I did—wish that they’d just return to the tour and keep their misery to themselves. They have good scenes on occasion. They even rope you into a smile or two. Still: At Middleton deserves to be graded as both a pass—as in don’t go—and a fail. 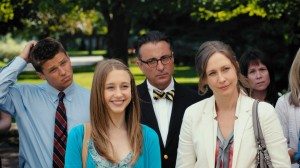 As counterpoint to the heartfelt discussions you endure from the mouths of these unpalatable parents, we get their children. Spencer LoFranco plays Conrad mainly by inserting and then removing iPod earbuds. Taissa Fermiga—Vera’s sister, not her daughter—plays Audrey, and here’s a relatively bright spot. If the elder Fermiga (a phrase that sounds Lovecraftian) brings emotional rawness, it seems, in comparison to Taissa, that Vera’s only snagged those scraps that her sister couldn’t carry. Audrey is as exaggerated and depressingly underdeveloped as everyone else in At Middleton, but at least she feels like an actual human. You watch Taissa and recognize the intensity of that time, that age. Her character desperately wants to go to Middleton to study with a linguistics professor, as most teenagers do, so don’t expect too much. 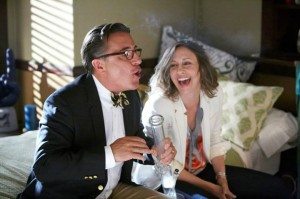 Time to loosen up the ol’ bow tie, Andy.

By the time they appear you’ve endured forced frivolity, forced catharsis, forced bonhomie, and two adults dancing through a showering fountain in dappled sunlight. It’s just as you dreamed: Andy Garcia all wet and glistening. Also, he’s taken a few bong rips and danced around a dorm room so there’s that.

In terms of the direction, I would not encourage Mr. Rogers to feel obliged to make a second film. There is nothing abjectly terrible about At Middleton save for the fact that I paid to see it. I did not stick around for the Q&A, but it was intimated that the story ‘was a personal one’ for Adam Rogers. For this, he has my genuine sympathies.

2 responses on “At Middleton Gets Graded Pass / Fail”