What, like you have a clue what Philomena is about? All you know is it’s one of the fifty movies nominated for a Best Picture Oscar. For all you know it’s about a telekinetic English goat herder whose love affair with Queen Victoria in 1885 jeopardizes England’s hold on India . If you’re like me you look at the name—Philomena—and assume it’s pronounced to rhyme with this:

Good luck getting that song out of your head this week. For the record, it’s pronounced with emphasis on the ME. Seems there was a famous virgin who went by that name. Which strikes me as one of a million things weird about Catholicism, the whole obsession with virgins, turning them into saints, martyring them. It’s like two historical steps from throwing them into volcanoes or feeding them to dragons, isn’t it? Which reminds me, I’d like to watch Dragonslayer again soon, find out if it holds up from my youth. Hm. I’m glad we had this conversation.

Anyhow, not being personally familiar with the pantheon of famous martyred virgins, I wasn’t even aware that Philomena was a person’s name. What was this movie, anyway, I wondered? Something about a goat herder? Let’s see, Judi Dench is in it? And Steve Coogan? Sounds like The King’s Speech, Part II, i.e. one of those impressively acted, emotionally low-key British movies that win lots of awards but leave zero lasting impression. Does anyone even remember that a movie called The King’s Speech exists? And won the Best Picture Oscar? 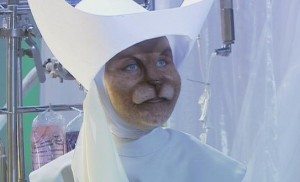 Evil alien nun, cat variety (thanks to Doctor Who for knowing what I’m talking about)

My apologies. You’re desperate to find out about these alien nuns with exploding heads. Truth be told, while the movie does feature a convent full of evil nuns, none of their heads literally explode, and the bit about them being aliens is, I grant, something of a leap of inference on my part. All the same, you can’t disprove that they’re aliens, can you? No. You cannot.

Nuns, convents, Catholicism—makes a lot more sense once you introduce the alien angle, does it not? The Irish nuns in Philomena take young girls into their convent to train them in the ways of nunnishness, but should any of those young girls become pregnant—and wouldn’t you know it, many of them do (something to do with a total absence of sex education, one might suspect)—their babies are taken by the nuns, while the young mothers, should they have the fortune not to die in childbirth—many do—are effectively turned into the convent’s slave labor to pay off the alleged cost incurred by the nuns in raising the children.

Thing is, the nuns don’t raise the children for long. They look for parents to adopt them. The price is so high that only rich Americans can afford it.

Did you get that? The nuns steal babies, imprison and enslave their teenage mothers, then sell the babies to the highest bidder. Now tell me they’re not aliens. 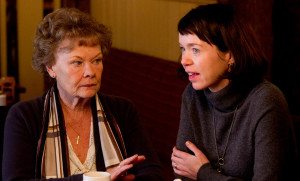 Philomena and her daughter discuss the possibility of alien invasion

As you might have guessed, Judi Dench plays Philomena, not a saint, per se, but a very nice old lady fond of romance novels and Martin Lawrence movies (I actually did not make that part up), who fifty years after the birth of her son, and forty-six years since she last saw him, decides to search him out. She never told a soul, not even her adult daughter, about him. She was too ashamed of her sin.

Steve Coogan, who co-wrote the script with Jeff Pope, plays Martin Sixsmith, a journalist recently fired from his position as a government advisor. He doesn’t think much of human interest stories, but he’s desperate and unemployed, so he follows up with Philomena, and off they go in search of her fifty year-old son. 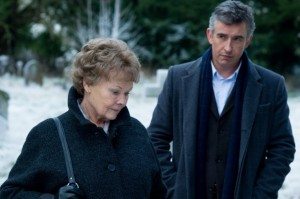 This is all based on a true story, by the way, which is kind of nice in terms of how it plays out. It goes places you’re not expecting, places no fiction film would go. At least in some ways. By the end it goes exactly where you expect it to go. Such is life when adapting reality into neatly tied up cinematic packages.

Dench and Coogan play off each well in what becomes something of a road trip movie. They start their search at the Irish convent, but good luck getting anything out of aliens. The nuns lie like snakes. Once Coogan stumbles onto the American adoption angle, they’re off to the states, where much is learned. 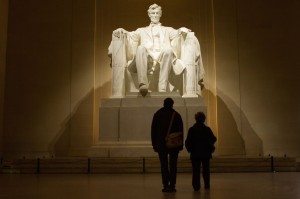 The symbolism here, with Lincoln, whose head exploded when the alien shot him at Ford’s theater, is perhaps a little too obvious?

My voluminous research on Philomena reveals that a New York Post reviewer called the movie anti-Catholic, which strikes me as completely bonkers. I guess if pointing out the horrible things done by people in the name of religion makes one anti-religious, there’s that, but in the end the movie couldn’t be any more pro-Catholic. The whole point of the film is to embrace forgiveness.

For that matter, the movie comes down rather hard on Sixsmith, whose vaguely professed atheism is ridiculed throughout. Which perhaps my thinking that just goes to suggest that the movie handles religion and atheism evenhandedly? Perhaps. 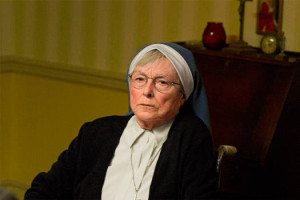 The leader of the evil nuns, just before her head explodes

Returning to the exploding head angle, here’s an idea: if you see Philomena, or have already seen it, imagine all the scenes with nuns ending with their heads exploding. Boom! Did I not just improve this movie a thousandfold? I believe I did. You’re welcome.

Not to say Philomena is a bad movie. It’s perfectly respectably fine. It has good performances, good writing, an interesting story. It’s directed by Stephen Frears, whose lengthy filmography is filled with movies I’ve never been particularly fond of, so on the whole, I suppose this is a step up. Philomena is fine. Also, it isn’t especially deep or thought-provoking, it’s feel-good in all the ways you know it’s going to be feel-good, and, like The King’s Speech, a year from now you’ll have forgotten the entire thing.

But maybe that’s what you’re in the mood for tonight? It’s either that or 12 Years A Slave. Which might not leave with you the warm fuzzies.

Better yet, why not watch a brilliant movie criminally ignored by the Oscars? Inside Llewyn Davis is still playing. See it big while you have the chance.