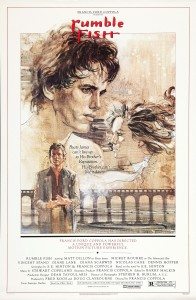 You want to talk odd kettles of fish, colorful Siamese fighting fish, even, you should take a look at Rumble Fish, the crazy black & white art flick Francis Ford Coppola made on the heels of his other S.E. Hinton book adaptation, the far more pedestrian The Outsiders. Coppola and Hinton wrote the Rumble Fish script on his days off shooting The Outsiders, and Coppola shot it using many of the same actors and locations.

Unlike The Outsiders, Rumble Fish has a stark visual style inspired by German expressionist classics like The Cabinet of Dr. Caligari, and film noirs, in particular Orson Welles’s Touch of Evil, and boy does it ever look great. Intense close-ups, rakish angles, shadows like claws scratching walls and faces. It’s a haunted movie. Coppola’s other visual inspiration was, of all things, Koyaanisqatsi, which he saw an early screening of (and which so impressed him that he lent the fame of his name to it). Scene transitions are marked by clouds racing overhead, buildings standing like sentinels in the foreground. The theme of time passing is woven throughout the movie. 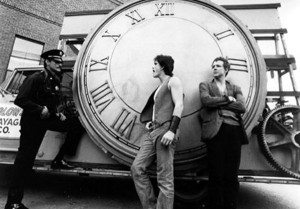 i feel like something symbolic is going on here

The score is composed by Stewart Copeland, the genius drummer of The Police, and it’s weird stuff, heavily percussive without being overbearing, at times jazzy, and always off-kilter and unique. In places I’d even say it doesn’t quite work, but in saying so, I wonder if maybe it’s working even better. If that makes any sense. It gives the movie a vibe you’ve never heard before.

There’s little in the way of story to Rumble Fish, which more than its dramatic black & white look led, I’d guess, to its failure to impress when it opened (plus is came out the same day as The Dead Zone and The Right Stuff. Tough to beat Stephen King/David Cronenberg and astronauts). Many critics panned it, and audiences stayed away in droves. 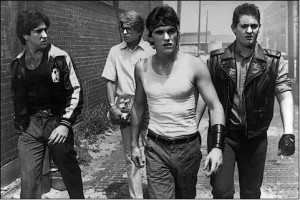 It’s about tough kids in Tulsa, set somewhere in the past, maybe the ‘60s? Matt Dillon plays Rusty James, younger brother to Motorcycle Boy (Mickey Rourke), who before he left town led the local gang. Rusty wants to take his brother’s place, but he’s not too bright, and he’s not exactly inspiring. Who’d want to follow him? His friends are played by Nicolas Cage, Chris Penn, Vincent Spano, and Laurence Fishburne, all marvelously young. Dennis Hopper plays his alcoholic father, Diane Lane plays his girl, Patty, and Tom Waits turns up in a few scenes, muttering gravelly behind the counter at the local diner.

Not a bad cast, is it? Everyone does great work, too, especially Rourke, who’s got this distant, dreamy thing going on that’s terribly compelling. One look at him, and you know why everyone thinks he’s the man. Coppola had him read a book on Napoleon to give him a sense of Motorcycle Boy’s attitude. When asked why no one’s ever just blown his head off, Motorcycle Boy says, in his soft-spoken voice, “Even the most primitive society has an innate respect for the insane.”

So Motorcycle Boy returns to town, rolls up on his motorbike and saves Rusty’s ass in a gang fight. Thing is, Motorcycle Boy isn’t interested in gangs and fighting anymore. Doesn’t seem like he’s much interested in anything at all, aside from reading heady books and drifting through his old haunts. Rusty tries to get to know him. Tries to talk to their father. Tries not to screw up his relationship with Patty. And there’s your movie. Two brothers wishing they were anyone but themselves, trapped by a society that refuses to let them swim free. 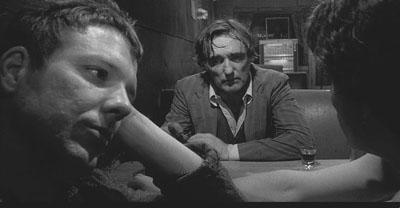 A few sort-of dream sequences show up too, one where an injured Rusty floats up out of his body and flies around looking at all of his friends, and another where he has visions of Patty in lace underwear lounging on bookshelves and other inappropriate locations at school. Which is kind of wonderfully unusual. 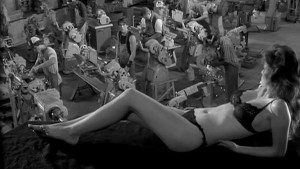 Then there’s the fish. Rusty and Motorcycle Boy hang out in the pet shop watching the Siamese fighting fish. They’re red and blue and green, the only colors in the movie. Motorcycle Boy is fascinated. He wants to set them free. It’s only when they’re put together in the tight confines of the tank that they fight one another. 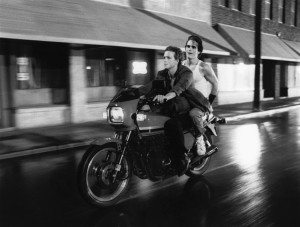 The brothers go for a ride

The brief flash of action at the end of Rumble Fish I found a bit sudden and unmotivated. I liked best the bulk of what comes before, just characters hanging out, talking, fighting, going nowhere, watching the shadows grow. It almost feels like a far more consciously arty early Jim Jarmusch movie.

Speaking of whom, Stranger Than Paradise, also black & white, also plotless, came out in ’84, only a year later. Critics loved it. Was Coppola too early with Rumble Fish? Or was the problem that he was Coppola? I wonder what the reaction to Rumble Fish would have been had a first-time director made it. Then again, no first-time director could have made Rumble Fish the way Coppola did. Like it or not, it’s the work of an experienced artist. 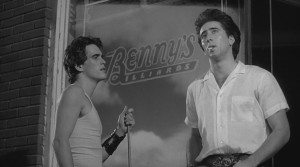 Nic Cage, in all his youthful glory

Coppola’s had such an odd career. The four movie run of total genius in the ‘70s, followed by thirty years ricocheting all over the place. People expected masterpieces from him, and when he delivered curious movies like One From The Heart and the Hinton adaptations, they were disappointed. We all wanted another Apocalypse, didn’t we?

Rumble Fish is the last truly far-out art movie Coppola made (or maybe there’s an argument for Bram Stoker’s Dracula? At least a semi-facetious one?) It might be the best film he made post-‘70s, though there’s not a lot of competition (Tucker? Peggy Sue Got Married?). And I can’t even say I loved Rumble Fish. I liked it. I was impressed by how out-there odd it is, how personal and defiant, and if you’ve never seen it or haven’t seen it since the ‘80s, I recommend it. 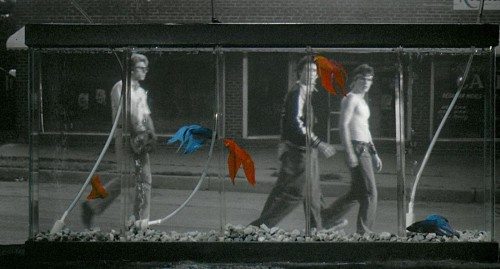 Who are the fish?

7 responses on “Fighting The Rumble Fish”