If there’s one thing Alfred Hitchcock taught us, it’s that San Francisco is a creepy city fueled by paranoia. Doubles are on the loose, everyone is watching you, and giant monsters lurk in the Bay. Okay, that last bit isn’t in Vertigo, it’s from It Came From Beneath The Sea, which doesn’t seem to get as much critical love as Hitchcock does. Well. It’s an unfair world. 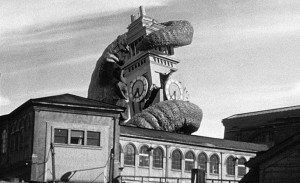 Sure, San Francisco is charming on the surface, but as in a David Lynch movie, it’s the pretty exterior that hides a festering evil. An evil that’s coming to get you.

Ever look out the window and get to thinking how all of those people aren’t necessarily people? That you’re the only human left? I do. All the time. That’s normal, right?

I try to remain calm. I try to pretend they aren’t even now gathering just out of eyesight, waiting for their chance to get me. I try not to accept the truth. But it’s no use. They’re coming to get me.

In this week’s Mind Control Double Feature we travel to San Francisco, and freak the fuck out. 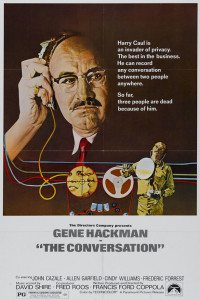 After making one of the greatest movies of all time in The Godfather, and while prepping one of the other greatest movies of all time, The Godfather Part II, Francis Ford Coppola, being some sort of movie-making cyborg genius, shot an original script he’d written years before. He wanted to make something personal. You know, in contrast to those commercialized, mainstream Godfather hits.

Which is why in ’74 Coppola released two movies, both of which were nominated for Best Picture Oscars. Godfather II won. The Conversation had to settle for the Palme D’Or at Cannes. Coppola was on a bit of a roll.

Inspired by Antonioni’s Blow-Up, about a photographer who thinks he inadvertently photographed a murder, The Conversation, set in San Francisco, tells the story of surveillance expert Harry Caul (Gene Hackman in, arguably, his best role), a very paranoid and subdued individual, who’s hired by a shady organization to record a couple talking in Union Square. 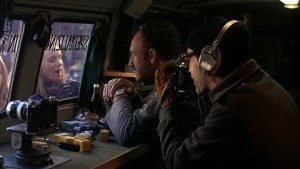 Never look at your reflection in a van’s window

This Harry does. It takes a lot of work to isolate the voices of the couple, who’ve met in a public place expressly to avoid being overheard. As the movie progresses, Harry plays the tape of their conversation over and over again, carefully tweaking it to bring out the complete conversation. It sounds as though the people who hired Harry plan to kill the couple. Harry’s work once before led to people dying. What if this tape is used to justify a double murder? 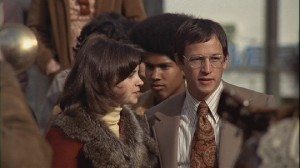 Like Blow-Up, The Conversation is about one’s perception of reality. Does an objective reality even exist? Or is reality only what you believe it is? Is there a difference? Harry decides he knows what the conversation means, and takes action, of a sort. He injects himself into his version of events. Things don’t go as planned. Or as perceived.

Harry works in a sort of warehouse, and within that warehouse a large wire cage, to prevent the use of electronics to surveil him. He’s a very paranoid man. By the end of the movie, he’s got good reason to be. Which is to say, the only reason he’s so paranoid is because everyone’s out to get him. 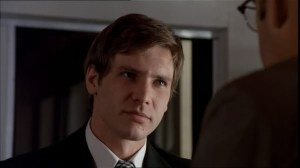 The Conversation is very much Coppola’s version of the ‘60s European films that inspired him, as seen through the paranoid lens of the ’70s. It’s a slow and thoughtful movie, with little in the way of exposition. It’s essentially the interior story of Harry.

The cast includes Harrison Ford, Robert Duvall, and Frederic Forrest, all soon to be in Apocalypse Now, as well as John Cazale, who only stars in Best Movies Of All Time, Cindy Williams (soon to be Shirley on TV), and even a young Teri Garr.

By the end of The Conversation, the suspense and tension have built to a peak. You’ll be right there with Harry, certain there’s no hiding, that no matter what you do or where you go, they’ll be there, watching you.

Invasion of The Body Snatchers (1978) 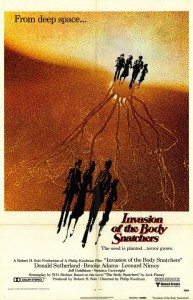 It’s not often that a remake holds up against the original. Philip Kaufman’s Invasion of The Body Snatchers is one of the rare exceptions. I don’t like it quite as much as Don Siegel’s ’55 original, but it does what the best remakes do: it takes the same story and makes it feel new. It’s one of the three great remakes of the original sci-fi wave, along with The Thing (’82) and The Fly (’86).

Where the original used a late-addition voice-over to amp up the creepiness from the get-go, Kaufman makes alien origin of the body snatchers clear from the first shot–a far flung planet, and the weird floaty gelatinous jelly-fish things drifting off it into space. They drift to Earth (they don’t fry entering the atmosphere because, um, nevermind), where they land on plants and leaves in San Francisco. Creepy arms crawl out of the jelly and form little pods that sprout into pretty red flowers. 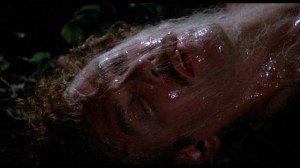 A new and improved Mr. Sutherland

A delightfully icky effect, those little blobs sprouting arms. As one would hope, all the goopy pod people effects in this remake outshine the original (though nothing is half as outrageous as what’s to come in The Thing and The Fly).

Elizabeth (Brooke Adams) brings one of the flowers home. And what do you know, the next morning she wakes up to find her boyfriend acting like an emotionless automaton. She watches him bring a weird sack of trash out to the curb. Later she follows him around town, where he meets with seemingly random people in cold, eerie office parks and empty lots. 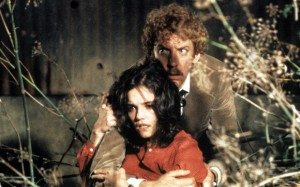 Don’t worry. Everything will be fine.

She tells her worries to her co-worker and secret crush, Matthew (Donald Sutherland), who recommends she come to a talk given by a psychiatrist friend of his, David Kiber (Spock—er, Leonard Nimoy). What with others at the talk flipping out about their husbands not being their husbands and so forth, Elizabeth isn’t exactly reassured.

They meet Matthew’s weird friend, Jack (Jeff Goldblum), who works with his girlfriend, Nancy (Veronica Cartwright), at a health spa. They discover a strange, seemingly dead body on one of the massage tables. Stranger still, it almost, but not quite, resembles Jack.

Well. We know how this is going to turn out. 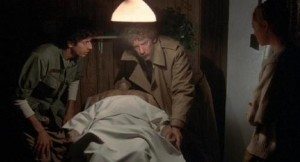 Some of the creepiest scenes are simply shots of Elizabeth walking through San Francisco looking at people. They do what they normally do: walk, ride buses, some looking at her, some not. It would all be completely normal—except we know they’re monsters.

In another scene, Elizabeth and Matthew drive through downtown when a madman throws himself onto their windshield screaming, “They’re here!” This is Kevin McCarthy, star of the original. He runs away, chased by an eerily calm yet insistent mob. Matthew keeps on driving. 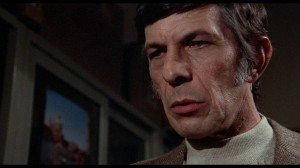 This man is suspiciously logical.

Kaufman’s version actually hews fairly close to the original in terms of plot and character, yet all the same it feels like watching something new. Kaufman wisely avoids replaying the famous finale of the original movie. He comes up with an ending that’s scary, paranoid, and very dark. Which fits in quite nicely with other movies of the decade. If any movie was ripe to be remade in the ’70s, it’s this one.

And if any movies were ripe to be watched in 2014, an era where the goverment has eyes on your every move, it’s these two. Watching The Conversation and Invasion of The Body Snatchers you can’t help but believe what you’ve always feared is true: they’re out there–whoever or whatever they are–they know you’re on to them, and they’re coming to get you. 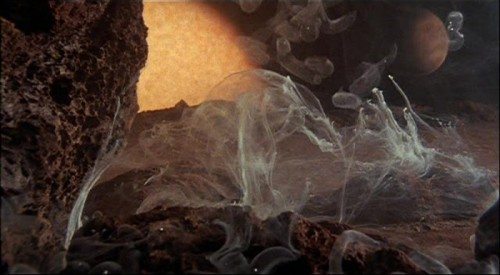 space goo on its home planet

3 responses on “Mind Control Double Feature #83: They’re Coming To Get You”