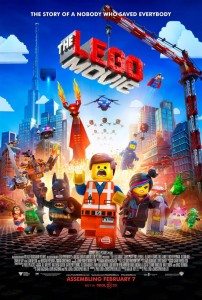 From the headlines it seems that The Lego Movie is going over like a ton of bricks. Assuming that you love bricks, which you probably do if you’re curious about The Lego Movie.

It is “amazingly stupendously fantabulous!” and “the best movie I’ve ever seen” and “so funny my spleen exploded,” say well-known critics in quotes I just made up. Audiences are literally howling. Literally—at least in the auditorium I saw it in—where one adult vocally expressed his astonishment that The Lego Movie contained—wait for it—Legos.

I have only a gentle fondness for bricks, as opposed to the ravenous breed of love evidenced by this sort of reaction. Bricks are pleasingly shaped objects, useful for construction and whatnot. I also used to play with Lego brand building blocks as a child and loved to step on them with bare feet and stick the little people-head pieces up my nose.

So of course I went to see Phil Lord and Chris Miller’s The Lego Movie on opening night with a head full of Norwegian winter ale. As one does. In the auditorium in which I saw this film—and I may have mentioned this—people were literally howling with ecstatic laughter and amazement. Others—paid others, I hope—were wearing Lego people-head helmets that covered their entire skull in plastic. 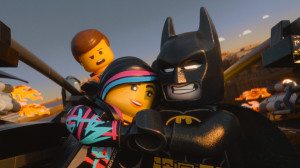 I thought The Lego Movie was a decent film for February. I thought it was easily both more entertaining and meaningful than George Zimmerman boxing DMX. Or is it DMZ? One of those DM guys. I can’t keep them all straight.

I really liked Lord and Miller’s previous entertainments. Both Cloudy with a Chance of Meatballs and 21 Jump Street were sly films with enough self referential comedy to keep a jaded film critic pleasantly surprised. The laughs, in both of those films, came on top of mass-audience acceptable plots that rolled all the people-heads willingly towards whatever came next.

Good stuff, I say, in a quote I just made up.

I expected The Lego Movie to amuse me in the same fashion, particularly as my people-head was full of Norwegian winter ale. And lo, The Lego Movie did amuse me, but only somewhat. The film is much funnier than tearing apart the Russian Winter Olympics for providing exactly the sort of entertainment everyone wanted in the first place. That being the entertainment of failure. So comparatively, The Lego Movie is good, wholesome fun. 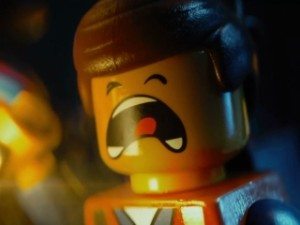 This, you may have noticed, is February. And February has been statistically proven to be the shittiest month to see a movie.

So for February, yes; The Lego Movie is a resounding success. There are plenty of places to laugh genially. The creativity evidenced in making the film (mostly) out of Lego brand blocks invites some novel scenarios. The flurry of pop culture references within actually suit the subject of this film more aptly than they do in most other kid’s films. And then the movie is over and that ghastly ‘Everything is Awesome’ song is stuck in your head like a Lego brand building block stuck to your bare foot.

I went in to Lego expecting and wanting a rollicking good time. It dives in full speed, with well voiced characters from Chris Pratt, Elizabeth Banks, Liam Neeson, Will Arnett and others. I chuckled frequently as the lead character Emmett buffooned about, and then less so, as I failed to find anything or anyone much to invest in—when the story and personalities involved revealed themselves as little but a skeleton upon which to hang bon mots. 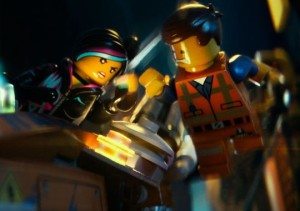 By the end, the conflict of following instructions vs allowing for creativity seemed pat even for toddlers. Everything is awesome and everyone is special. Please pick up your attendance award on your way out of the theater.

Here, finally, is a film you can play along with. Unless you count Battleship and Transformers and G.I. Joe and all those other films that brought our childhood fascinations to the big screen in a way that made childhood creativity obsolete and out-matched. I don’t think making film versions of toys inspires wonder; doing so packages, sells, and squelches it. These films—even ones that claim to value creativity—offer you an untempting chance to play chess against Bobby Fischer, or to box George Zimmerman, or to face some other titan in his or her field. Bear wrestle against a shirtless Vladamir Putin, perhaps.

In Lord and Miller’s previous films, I felt the joke was on the joke. The films weren’t spoofs—they were deconstructions. This one started out with less to disassemble and when they’re done disassembling, we’re left with just a ton of bricks.

If you’d like to go see a film in the theaters, and it’s still February, you could do worse than The Lego Movie. The fact that you could not do better is faint praise, though—and that’s exactly right, for my praise for the film is faint.