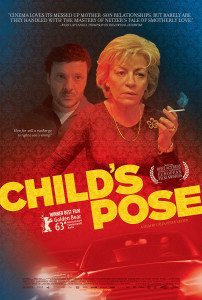 The new Romanian film, Child’s Pose, asks you a very rude question. What do you do when your corrupted maternal instincts drive your offspring away?

Director Călin Peter Netzer inveigles you into the personal world of an atypical Romanian family—or at least, not knowing many Romanians, I hope that it’s atypical. Cornelia (Luminita Gheorghiu) is the matriarch of a well-to-do but disintegrating family unit. Her henpecked husband does as he’s told, without affection. Her adult son, Barbu (Bogdan Dumitrache), despises her. As the film starts, Cornelia tells her sister of the vulgar things Barbu has said and done to her, just today, on her birthday. He called her names a son does not call his mother. He physically ejected her from his car. 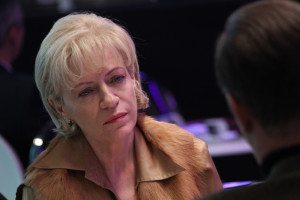 Barbu will not be attending Cornelia’s birthday celebration. Embarrassed, she will lie to cover his absence. Cornelia is a powerful woman—an architect with well placed friends—but her relationship with her son is what gives and depletes her life of meaning. When word reaches her that Barbu has accidentally struck and killed a boy with his reckless driving, the tragedy involves Cornelia as deeply as she can manage.

Cornelia cannot stop being a mother or having a son, regardless of either individual’s significant failings. And they are both significant, in magnitude and symbolically. 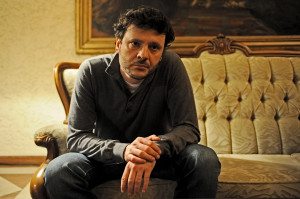 Child’s Pose meanders and wobbles, just like its unsecured camera work, drifting you into and through situations of unclear conclusion. They all involve the doling out or expectation of favors. It’s about matronage, which is a word I’m somewhat surprised to have to make up. Gheorghiu is excellent as Cornelia and, on the whole, the film is brave in its lack of simplification. It is hard not to read the picture as socio-political commentary, but doing so may also be unnecessary. Needing filial affection but not deserving it is a strong subject for a film, even without subtext.

Cornelia pulls all the strings she can to keep Barbu from prison. Barbu rewards her machinations with undisguised scorn. How this loathing of his mother has come to fester, writers Răzvan Rădulescu and Călin Peter Netzer do not deign to impart. We simply see Cornelia unable to temper the trampling she gives her life and his, fully aware of but unable to mitigate her own entitled, ungoverned indelicacy.

Child’s Pose is not much cinematically, but it is evocative. Watching its main characters negotiate who they are and what they have done—situations which have more than coincidental parallels—is like testing a sore tooth with your tongue. You cannot help but continue to check, worrying the pain as a strange form of comfort. 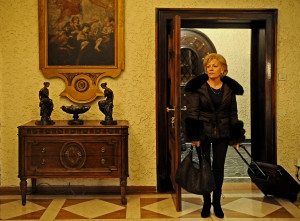 Barbu has heedlessly charged through his life, ungrateful and even perhaps unaware of the forces which so generously placed him. In the process, a family has lost its son. For Cornelia, all that may sound uncomfortably familiar. Child’s Pose worries the pain. Even so, you could consider the film’s title—a reference to a restorative yoga asana—as a hint of hope for the future for this family and Romania.

Then again, it may be ironic. Or a helpful suggestion for how those of us who have watched this Berlin Film Festival Golden Bear winner might want to end the evening.