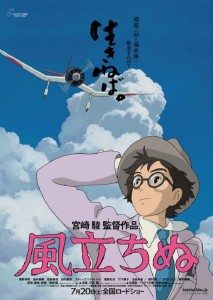 Hayao Miyazaki’s final film (so he says), The Wind Rises, is a fitting close to his career. It feels ephemeral. It blows by soft as a summer breeze. It’s the true(ish) story of Jiro Horikoshi, the man who designed the Zero fighter used (in)famously in WWII (or at any rate the Zero’s predecessor). It’s also a metaphor for the life of the artist, specifically, one must suppose, the artist Miyazaki.

A dreamy, insubstantial movie about a man who designs planes used to start a war? Is that a good idea? I admit I’m not sure. But I’m going to try to work it out by writing about it.

At what cost one’s art? This is the question the movie poses. The answer? Any. No cost is too great. To put it simply. I’ll dig deeper in a bit. 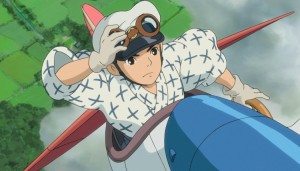 We meet Jiro as a boy, dreaming of flying. He speeds over the landscape in a tiny homemade dreamplane, only to be attacked from above by evil dark gremlins riding black winged bombs. They smash his plane to bits.

Later he dreams of famous Italian airplane designer Caproni, flying over a green field in his armada of planes, all equipped with weaponry. They argue over who’s in whose dream, which is to say, their dream is one and the same: they want to design aircraft; poor eyesight prevents their being pilots. And what of the fact that their planes will be used to wage war? Caproni asks, “Do you prefer a world with pyramids, or with no pyramids?” Caproni has chosen a world with pyramids, no matter the cost in human lives. Jiro makes the same choice. 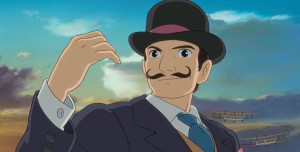 Pyramids? Yes? Come with me.

So this is not a tale of an innocent whose dream of designing airplanes, once realized, is to his surprise usurped and corrupted by war. War is ever present in The Wind Rises. Jiro’s dream is corrupt from the first. His lone employer is the military. At one point he shows off a beautiful blueprint to the other designers. It’s perfect but for one flaw: it would be too heavy with guns. “So I had to throw that out,” he says to laughter. Ha ha! What good’s a plane without guns? 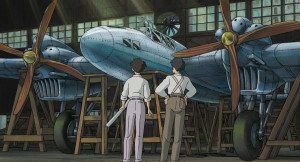 Jiro checks out a German plane

Jiro designs better and better planes, travels to Germany to see their superior craft, meets a girl. All the while he never flinches from his dream. He never flinches from anything. Nothing flusters him. He faces no real obstacles. He’s a strange character to center a movie around. I never felt connected to or concerned for him. He’s no more than historically and, possibly, metaphorically interesting.

Naoko is the girl he meets, when she’s in fact a little girl and he a teenager, on a train trip, their journey interrupted by the Great Kanto earthquake of 1923, which, along with the ensuing fire, destroyed Tokyo. The earthquake scene is visually the highpoint of the movie. Miyazaki’s style of animation perfectly captures the earth rolling underneath the city. This early scene of destruction foreshadows the devastation to come in the war. 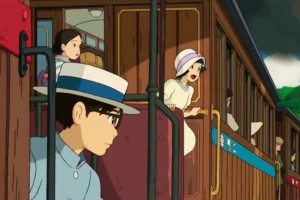 Much later in the story, Jiro marries Naoko, after another chance encounter brings them together. She suffers from tuberculosis. She does little but lie in bed and wait for those few moments she can spend with Jiro when he isn’t working. He loves her very much, in his affectless way. But he loves airplanes more.

Miyazaki is saying something about the all-consuming nature of art, in how it affects the artist. It’s not that Jiro ignores Naoko, and it’s not that he doesn’t care for her. It’s that he has to spend most of his time on what he loves most. It’s not a choice he makes. It just is.

I don’t think it’s a spoiler to reveal that WWII doesn’t work out so well for Japan. All of Jiro’s beautiful planes are either shot down or purposefully downed by their own kamikaze pilots. 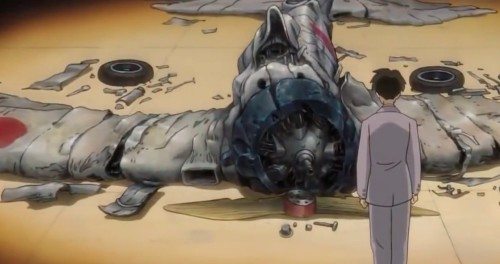 The future of his planes

The movie doesn’t include the war, nor the destruction of the airplanes. It leads up to Jiro succeeding in designing the planes—and shows them zooming off to fight—then concludes with a dream sequence returning us to Jiro’s green field, now littered with destroyed airplanes. It’s a scene you’d expect to pack more emotional punch than it does. I didn’t feel moved at all. Jiro isn’t affected. Why should I be?

The Wind Rises is beautiful but largely empty. It’s interesting for awhile, but it goes on rather long. It begins to feel tiresome, and this, I think, is because there’s no way to connect with Jiro. He wants to design planes at the start, no matter that they’ll be used for war. He designs them for war, and not once does that fact bother him. It’s irrelevant to him. Which is in part the point. War is simply there, same as the sky. Why would that affect Jiro’s desire to design airplanes?

Flying in a dream

“All I wanted to do was to make something beautiful,” says Jiro. A fine dream. But when you know the beautiful thing you’re making will be used to kill, shouldn’t you reflect on it? Even for one brief moment? Jiro doesn’t. Again, his desire to create his art is something disconnected from anything else. He never faces a difficult decision because for him there is nothing to be decided.

Now if we read the film as a metaphor for the artist, this seems morally acceptable. The artist wants to create his art. If his art should somehow be perverted, what’s that to the artist? The movie goes even further to say that art will inevitably be perverted. If that’s the case, there really isn’t anything moral for the artist to consider. People are people, the world is the world, you might as well yell at clouds as try to change it, the movie says.

But what’s uncomfortable here is that the movie says this not about some kind of pure art—painting or sculpture or what have you—but about warplanes. War, the movie says, is inevitable. So why bother about it at all? 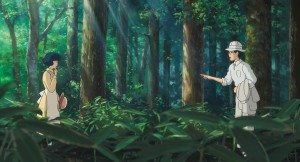 Back to the question at the heart of things: at what cost art? If the cost is inevitable, if art will be perverted no matter what, then the question posed by Caproni, “Do you prefer a world with pyramids, or a world without pyramids?” comes with zero implications of potential human suffering. It asks nothing more than it asks: do you prefer a world with beautiful art or one without it? No matter which you choose, the world will include war. The answer, then, is a given. 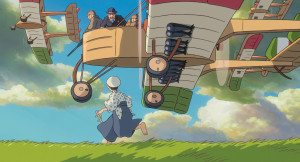 In order to guiltlessly tell a story about a beautiful creation used for war, Miyazaki has elided a profound moral quandary in a very clever way. He appears to present it, but does so in a way where only one answer makes any sense. If only one answer makes sense, there’s no need to dwell on the question. So Jiro doesn’t dwell on it. He achieves his dream. He’s happy. His brief sadness at war’s end isn’t connected to his planes, except in the abstract, in that the war caused their destruction. He feels no complicity in what the planes were used for.

On the one hand, I agree with Miyazaki. War is like the rain. It’s a part of this world, like it or not. There’s no escape from it. Yet the hope that war is not inevitable, however unlikely or irrational a hope that is, I feel just as strongly. I think many do. I think, when faced with creating something we know will be used to kill, we must acknowledge the moral dimensions of our choice. If we choose to go ahead, that decision must, to some extent, weigh on us. If not, what does that make us?

I think it would make us like Jiro. Unemotional, disconnected form his fellow humans, with no concern for anything but his own dreams.

Which I grant is an excellent description of the artist consumed wholly by his art. 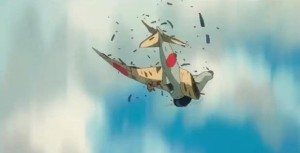 Where does that leave me? Considered logically, dispassionately, I see what Miyazaki is saying about the creation of art. The need to create it must exist in a vacuum. It must emerge from the artist. Questions of its use by others are not the artist’s concern. This is the message of the movie he’s created.

And that movie lacks real emotion, real drama, real humanity. On its surface, it’s a gorgeously animated, sometimes compelling work. Underneath, there is nothing but the wind.

4 responses on “The Wind Rises, And Miyazaki Drifts Away”