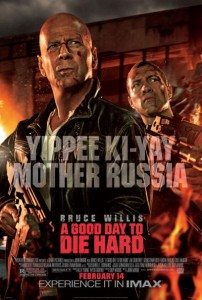 It is possible that you might think—after a long weekend of back-breaking yard work—that A Good Day to Die Hard would be exactly the sort of mindless mélange of explosions and bon mots to carry you through the agony and idiocy of a daylight savings time change.

Even having heard that the film is utterly terrible—which it is—you might think: ‘Whatever. I just want to watch John McClane blow stuff up. How can a desire so pure be wrong?’ And certainly, John McClane, hero of now five Die Hard films, is a lovable lug. We remember fondly this New York cop of average ability and above average tenacity stumbling into, and then pluckily dealing with, terrorist actions of global proportions. Just like you regularly stumble into your sharp-cornered coffee table, but with slightly less crying like a wet baby.

Is John McClane the sort of fellow who is intimidated by nuclear weapons or laser-fanged beavers? No. Bloody and bruised, he reliably drags his somehow animate corpse into one final showdown so he can save us all from boredom and reality. 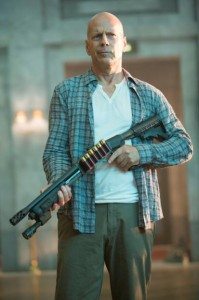 Take a good look at the expression on Bruce Willis’ face, then imagine it covering his face and yours for 99-minutes. That’s A Good Day to Day Hard.

But even if you thought that the Die Hard series was trending towards generic action gruel with its last terrible outing, A Good Day to Die Hard will impale you with its utter and complete worthlessness. It begins with a bunch of preposterous nonsense in Russia. Newscasts and outtakes from X-Men: The Last Stand show us two Russian oligarchs facing off over a mysterious file. The information the file contains will ruin one and keep the other in prison until his mouth-spiders take over.

Meanwhile, young Jack McClane (Jai Courtney) shoots some random guy in a bar and gets himself arrested so he can agree to testify against the oligarch with the file the following day or something. It was a little hard to tell what was happening as even this early in the film it was clear there would be nothing to care about at all, and I had started to drift. This is around minute two.

Meanwhile meanwhile, in New York, John McClane receives the bad news about his long-missing son, Jack. It turns out Jack is under arrest in Russia! Boy, bad news travels fast. Things look terrible. And by ‘look terrible,’ I’m talking both about the situation for Jack and the acting and writing and cinematography and directing in A Good Day to Die Hard. 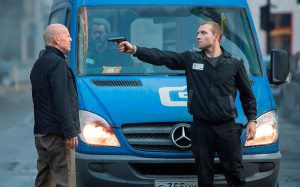 Shoot him. I would.

So that’s the set-up. Russian guys fighting over information with young Jack McClane somehow involved and old, bored, John McClane flying to Russia to set his young whippersnapper on the straight and narrow.

From there—and I’m not exaggerating for effect—every single car in the nation of Russia is totaled in a series of highly believable action sequences that involve John McClane casually trying to kill himself while repeating desultorily and repeatedly, “I’m on vacation.”

It’s important to note here, that when I say ‘John McClane’, what I really mean is Bruce Willis answering to the name of John McClane. This character is as easy to confuse with the man in Die Hard as I am with a 200′ tall golden statue of an eagle feeding its wings into an industrial thresher. 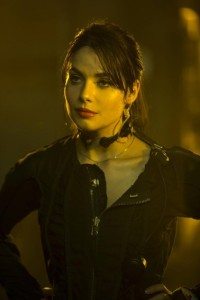 Yuliya Snigir plays the good/bad daughter character who is there to almost take her clothes off.

Naturally, as soon as McClane has gotten off the plane and had his requisite semi-comedic scene with a colorful cab driver—whom McClane tells where he’s going when he is already close enough to walk—Russia starts exploding.

Seriously, like someone covers the entire country in an inch of diesel fuel and then strafes it with a phalanx of attack helicopters until the combined population of Russia gets either brutally murdered or seems not to notice and goes about their lives. Coincidentally, John and Jack are reunited at the worst possible moment (i.e., during this film), so John can bork up Jack’s super secret C.I.A. mission which apparently was ‘wait for the bad guy to kill everyone in the courthouse and near the courthouse except, luckily, for you and the other Russian dude, then have exactly six-minutes to get somewhere else.’

There’s some depressingly ham-handed malarkey about how John was a distant father and how Jack was a rebellious son and oh heavens above why can’t fathers and sons just love each other in a gruff, macho, yet meaningful way?

You know what might help these two sort out their feelings for each other? How about a chase sequence that lasts twenty minutes and is as realistic as your cat cooking you and Lupita Nyong’o a five-course dinner. 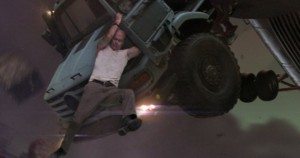 Looks real to me.

After that, stuff happens. Bruce Willis is abysmal, even for Bruce Willis. He is not even able to pretend to care about being in this film. And really, who can blame him? It’s a terrible, terrible, mouth-spiders bad film. There is not a single scene that makes one lick of sense. There is not a moment in which you perk up and go “oh! cool!” It is as by-the-numbers as something with only one number can be. By the time John McClane has foiled the swiping of uranium from Chernobyl (really)(and seemingly within 24-hours of the events which open the film) and is hanging from the bumper of a cargo truck which is hanging out of a flying helicopter that’s trying to shoot his son, there is one thing that is abundantly clear:

Under no circumstances should you watch A Good Die to Die Hard.

4 responses on “What Not to Watch: A Good Day to Die Hard”