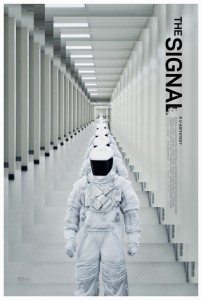 I realize that William Eubank’s new film The Signal is opening this weekend, so I wanted to give you all a heads up.

It promises a Coherence-style, low-budget, sci-fi mind-fuck, but all it delivers is a bunch of rancid tripe.

The first act is promising in an off-the-cuff way, with some decent characterizations and some attractive cinematography. Then the weird things start happening. Your brain contorts trying to make sense of what has befallen heroes Nic, Halley, and Jonah (Brendon Thwaites, Olivia Cooke, and Beau Knapp respectively) after things go sideways in some decrepit hacker hovel in the desert. 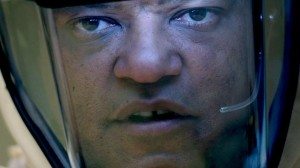 Most of the second act consists of Lawrence Fishburn lolling about as the government scientist tasked with asking obtuse questions and making calming expressions in a locked-down lab. There are some effects that are swell if you’ve never seen Akira or, I suppose, any other science-fiction film for the past decade.

Eubanks would like you to go in to his sophomore effort blind, so that what occurs might ensnare you. Those are cheap tricks that don’t pay off. I’d spoil what happens for you but it isn’t worth the effort. Suffice it to say that when the surprise ending comes, it has the creative brilliance of ‘and it was all a dream!’

For this ending to work, one must forget everything that happened since you sat down in the theater.

Which, now that I think of it, is a grand idea. Let us never speak of The Signal again.

No. You can’t have your money back. That’s just how the film ends. Get over it.