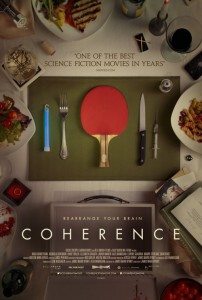 Have you seen James Byrkit’s film Coherence? This is the first film from the guy who co-wrote the bizarre and beautiful Rango. It’s a picture impressing festival audiences wherever it plays.

If you’ve seen it; good.

If not, this article will rapidly make the experience of seeing it — when you do — less mysterious. And why would you want that? Go see Coherence as soon as it hits your town, then come back and read this post in which we will give away exactly how the film doesn’t end.

If you’re in San Francisco or other parts of the Bay Area, Coherence is playing at the San Francisco International Film Festival on April 29th at 9:45 pm. See if you can get in.

Coherence plays with a twisty, perplexing plot, but going into the film cold isn’t really about avoiding spoilers. It’s about giving yourself room to solve a mystery on your own. Here at Stand By For Mind Control, we’re all about making our brains work. So get to work, brain.

Coherence — as you know because you’ve seen it — deals with a collision of parallel universes. Multiple versions of the same eight dinner party guests mingle in a number of identical houses. Watching the players come to terms with their dimensional decoherence is a squirrelly source of both drama and comedy. The film was outlined in detail by Byrkit over the course of a year, but then improvised by his cast in only a handful of days. The actors knew as little about would happen to their characters as you should have when you sat down for your first screening.*

Coherence is a story of layers, much like Shane Carruth’s Primer, but with a lot less basis in even surreal science. As Bykrit related to the audience at the SFIFF, his film is aiming more towards the Twilight Zone than anything else.

Weird shit happens; the fact that most of it is science-fictional lunacy doesn’t much matter.

A comet causing planes of reality to swamp each other? Ridiculous. But fun. 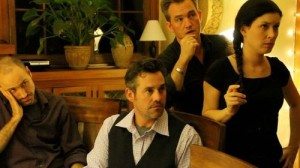 While Byrkit’s handheld style — busy with a shallow depth of field and lots of rack focusing — drove me a bit nuts, it was a reasonable solution to a lack of funds and actors working without a script. Those improvised performances and characterizations, since we mention them, impressed me across the board. More so once we take the project’s limitations into consideration. Seeing Buffy the Vampire Slayer‘s Nicholas Brendon onscreen again ought to make you happy as well.

Brendon’s character, like that of his compatriots, felt like a fully fledged human: intricate, consistent, and flawed in an original way.

At the Q & A after the screening I had a chance to pose a question to James Byrkit. I had just watched Coherence, gradually growing in comprehension and feeling fairly tickled throughout. Then, towards the end, when lead character Em (Emily Baldoni) decides to finally grasp her life (lives) by the horns, the film lost me. Not a lot, but appreciably.

While the production had well established Em’s motivations for striving hard to gain the life she wanted, resorting to violence seemed a large leap for her. Not only does Em twice attack an innocent to steal everything her victim possesses, but the innocent is — down to nearly the quantum level — herself.

Is that something you could bring yourself to do? To attack yourself? Em either twice attempts murder or she hasn’t thought through her actions very far. Where else can her doppelgänger go but a shallow grave?

So I asked James Byrkit how early in the process he had envisioned his ending and found his answer illuminating. He told us how Coherence doesn’t end: 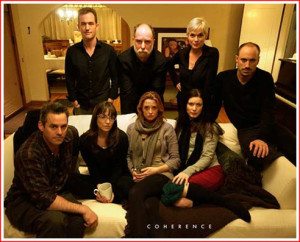 My glow stick is orange.

Originally, the film was conceived as wrapping up with everyone in the house(s) realizing that they needed to get to the ‘dark space’ in which the universes collided. They all stampede out the door and blast towards the nexus. As they approach, they see looming out of the dark ahead of them a version of themselves. Reaching out their hands to grasp themselves by the shoulder, a hand grasps them from behind and they spin around in an infinite loop of surprise.

I think I might have appreciated that ending more; an oblique finale that leaves the future pretty preposterous.

Byrkit went on to share that he realized as we worked that the film needed a main character, and that ended up being Em. He almost called the film ‘The Understudy’, but Coherence won the day. And so, in the version that got shot, poor Em gets stuck once again as an understudy, except this time her own, and a criminal one.

Although what the charge could be, I couldn’t say; I guess that’s attempted suicide?

* Except for Alex Manugian, who both played Amir and helped with the outlining