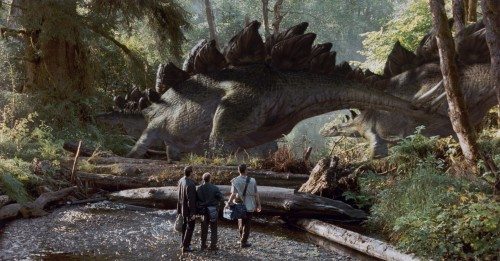 Another weekend has come and gone and another disappointing sequel has crashed and burned. Sin City: A Dame To Kill For had high expectations from fans and from box office forecasters. It was a bust on both fronts. The ingredients of what made the first film entertaining were there, but it didn’t fly this time.

More frustrating than a lazy soulless sequel to a great movie (think Ghostbusters 2) is a second installment that has all the potential to be a good movie but, alas, the makers over-thought the story. A great continuation was sitting right there but they messed it up by making it needlessly complicated.

Four films come to mind as lost opportunities. Spoilers ahead for old films. 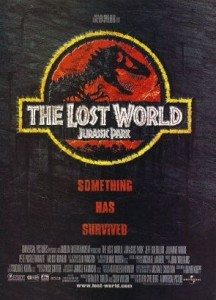 One of the things that make some part 2’s work is they do not need a lot of time to set up the story. The first movie introduced the characters. The second one can just cannonball into the plot. Superman 2 and Spider-Man 2 and The Dark Knight got right into the action. The Two Towers, the most exciting of the Lord of the Rings movies, picked up with the Fellowship already on their quest.

What blockbuster movie in recent memory better set up a sequel than Jurassic Park? When it ended, our heroes escaped but the island was still there. It was still filled with dinosaurs. And as Dr. Grant discovered, the dinosaurs were breeding despite all the precautions to prevent that.

Plus the Wayne Knight shaving cream bottle filled with embryos was still missing. And more to that point, a rival corporation to InGen was still interested in stealing the secrets of Jurassic Park.

Boom! The story is all set up! We already had a setting and reasons to return. And perhaps the characters could see things like the destroyed visitor center and trashed jeeps to remind everyone of the danger from the original film.

Is that what we got? Nope. There was a needlessly convoluted introduction of a SECOND island where the dinosaurs were bred and brought over to Jurassic Park. Wait, I thought we saw raptors being hatched inside the Jurassic Park labs?

While The Lost World smartly uses Jeff Goldblum as the protagonist, allowing him to expand from his original performance, the rest of the film is incredibly crowded. 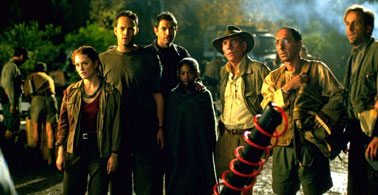 This picture shows about 1/3 of the main characters in the film.

Naturalists, hunters, corporate tycoons, Julianne Moore, Vince Vaughn, the scary dude from Fargo, a beardless Richard Schiff and Jeff Goldblum’s daughter all are on the island and everyone needs to have a monologue for character development.

By the time the T-Rex is let loose in San Diego, everyone watching the film basically shrugged, which is a shame.

The original Jurassic Park, while flawed, is a lean and fast roller coaster of a blockbuster. The Lost World could have been the same without spending time on the set up or on explanation of the island. 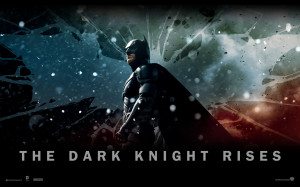 The Dark Knight was the Batman film we had been waiting for. Sure, it was not a perfect movie and maybe Harvey Dent was worth his own film instead of an extended epilogue. But it was cool, dark, and still fun and thrilling. And the ending of the movie provided one of the biggest and best cliff hangers for a blockbuster since The Empire Strikes Back.

Batman took the blame for Harvey Dent’s crime spree and was going to go into exile. The police were after him now with only Jim Gordon and his family knowing the truth. 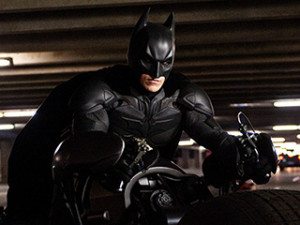 If Heath Ledger had lived, Part 3 would have been awesome by default.

The third and final installment would essentially be Batman on the run, needing to redeem himself. The police on Batman’s trail. Bruce Wayne retiring the cowl but inevitably it coming back to haunt him. Or maybe like Hank figuring out who Heisenberg was in Breaking Bad, someone could have cracked his secret identity.

Somehow the Catwoman would be involved, which is cool. But essentially the third Dark Knight movie looked to be Batman versus the police and can he turn to his ally Jim Gordon?

Was that what we got? OF COURSE NOT!

We got a Bane story. And Bane essentially did what The Joker did in Dark Knight but not nearly as interestingly. And Marion Cotillard was in it. Um, she’s a good actress, but what is she doing? And why are we following Joseph Gordon Levitt so much?

Oh wait, 4 years have past and Bruce Wayne has bad knees? Then he is Batman for a minute and then is in a giant pit in Morocco or somewhere? And I’m supposed to care about a story about a kid climbing? And Bruce Wayne is broke? And there is a bomb? And Gotham City is now some sort of Thunderdome?

Oddly, the few times the film came alive were whenever the police were after Batman… you know, the movie they set up in The Dark Knight.

At the end, Batman kind of dies and Bruce Wayne sacrifices himself to a life of living in Europe and having sex with Anne Hathaway. I was expecting something more exciting.* 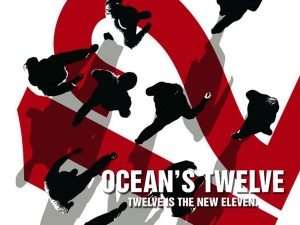 Yes, I am being totally serious here. Steven Soderberg’s version of the Rat Pack film Ocean’s 11 was everything a remake should be. It took the essence of what made the original entertaining (watching famous people have fun in Las Vegas) and updated it with a cast that resonates with modern audiences — plus they added a better script.

The result was a fun piece of popcorn entertainment. Stars could play to their strengths. George Clooney, Brad Pitt, Matt Damon, and Julia Roberts all do their thing and do it well. And character actors could have their moments to shine. Elliot Gould and Carl Reiner were introduced to new audiences which is always a good thing. Bernie Mac, Eddie Jemison, Casey Affleck, and Scott Caan earned some of the biggest laughs in the film. And the bad guy was a doozy. Andy Garcia was perfectly used as a charming yet terrifying villain.

The ending had a sly wink towards a sequel as some of Garcia’s men follow Pitt, and Roberts as they pick up Clooney from the clink. Plus Julia gets a throw away line that Brad Pitt’s character needed a girlfriend. 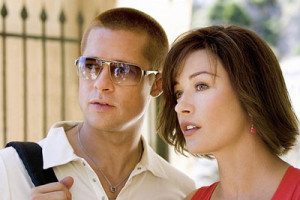 Which one is prettier?

The set up for Ocean’s Twelve sure looked like it was going to be simple yet fun.

What’s the assumed plot? Andy Garcia’s character tracks down the crew and wants his money back. They need to pull off another con to pay him.

Move the story to Europe so it isn’t another Vegas heist and have a sexy Interpol officer on their tail. And THIS time give Brad Pitt the love story opposite Catherine Zeta-Jones instead of retreading the Clooney and Roberts romance.

BOOM! Easiest sequel ever made!

But then came a subplot involving a French con man who is trying to out con Ocean’s crew. And suddenly there is another storyline involving Zeta-Jones’ dad. And along the way more and more people help the heist, because evidently 12 con artists to follow were not enough.

After twisting and twisting and tricking the audience so many times, eventually the fun went away and it became impossible to believe anything. A few of the moments were fun (especially a sequence where they had to lift an entire building in Amsterdam). But a plot twist at the very end invalidated 30 minutes of con trickery earlier and made the film a bit of a middle finger.

They key to a film like that is to have the audience constantly asking “what is going to happen next?” and NOT “What the hell is happening?”

Ocean’s Thirteen was a mess and not worth mentioning except for one thing. At one point during the film, my wife leaned to me and asked “Is anything ever going to HAPPEN?”

That’s another bad question to ask. 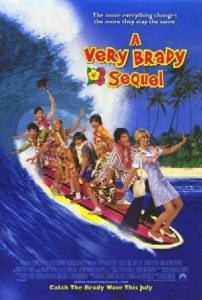 1995’s The Brady Bunch Movie was a lot funnier than anyone thought it was going to be. Some of the elements of the movie that made it fresh and hilarious then might seem a little tired now (kind of like how Wayne’s World no longer seems as original as when it was new.)

But the concept of putting the 1970’s Brady’s unchanged in a 1990’s world was funny, risky and went down a few unexpected roads. Marcia’s lesbian friend, a stoned Alice and other sexual humor caught a lot of people off guard. So did Gary Cole’s perfect Robert Reed impersonation as Michael Brady. And the kids were terrific in the film, especially an oblivious-to-her-own-sexiness Christine Taylor as Marcia and an on-the-verge-of-a-nervous-breakdown Jan played by Jennifer Elise Cox.

There were winking cameos by original cast members and Monkees to go along with car jacking jokes. Plus director Betty Thomas flawlessly recreated the look of the TV show that was contrasted with the realistic look of anything outside the Brady home.

The unexpected success of the movie sent Paramount into action fast-tracking a sequel. A Very Brady Sequel was everything a viewer would fear a slapped together part 2 would be. Wooden, not as fresh and clearly a quick cash grab.

However two elements of the second film showed there was an opportunity to make something funnier than even the first would have dared. The plot of the sequel revolved Carol Brady’s first husband returning. It turns out he was not dead. The whole premise of The Brady Bunch, being a widow and a widower marrying and making one big family, gets thrown out.

And with the arrival of the first husband, played by the always solid Tim Matheson, Marcia and Greg would no longer be brother and sister and be free to explore their own attraction to each other. 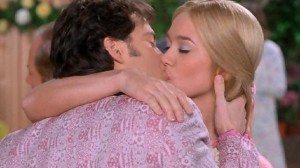 We all thought it

The scenes with Shelley Long as the conflicted Carol not knowing which husband to choose are not only funny but oddly character driven and gave the movie a little bit of purpose.

And Taylor’s Marcia and Christopher Daniel Barnes’ Greg have a scene where they confess their sexual desires, which is something that every sick minded fan of the TV show must have thought at one point or another.

The film had a chance to have a little bit of teeth and a story to go along with the pop culture humor and references. Sadly, new director Arlene Sanford went to the edge and then promptly ran back to safe territory.

Matheson turned out to be a con man and not Carol’s first husband and the father of Marcia, Jan and Cindy. And save for one stolen passionate kiss between Greg and Marcia, that awkward yet potentially hilarious subplot was scrapped.

Instead of a funny and daring sequel to a film that didn’t mind going there, we got a totally forgettable and forgotten movie.

As with all of these films, there seems to be a common thread: The story is right there! Don’t over think it. It is a sequel. Sequels should be simple, stupid!

* Ed. note: For the record, the author has not, to our knowledge, had sex with Anne Hathaway.