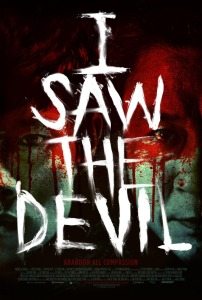 Look and squirm at the gorgeous grotesque.

Kim Ji-woon’s I Saw the Devil takes a ghoulishly grim revenge tragedy and frames it as the turning of maple leaves in long autumn light. This murder, this cannibalism, this rape is lovely. And that’s horrible.

Which may be the point and the point you’re about to miss.

I Saw the Devil, a Korean film, is now being remade by Simon Barrett and Adam Wingard — responsible for You’re Next and The Guest — despite the cataclysmic tanking of Spike Lee’s remake of Oldboy, another violent Korean cult hit. Some of the best modern cinema comes from Korea. Park Chan-wook’s Oldboy is a prime example, as is his Lady Vengeance, and his American production of Stoker. Bong Joon-ho’s Snowpiercer didn’t wow me, but his films The Host and Mother sure did. These movies — and other films from Kim Ji-woon, like The Good, the Bad, and the Weird (but not so much The Last Stand) — tend to have something in common. Something that sets them apart from most Western films.

That is the primacy of emotional impact and, frequently, the use of violence as a reactive agent. Which sounds like critical bullshit, so I’ll rephrase. 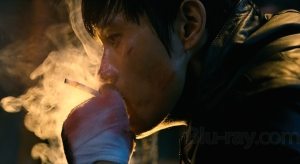 In Korean movies, it’s totally kosher to hack someone’s arms off if that’s what’s going to make your audience feel more strongly, even if story-wise that’s not exactly on the up-and-up. It’s about building an emotional state and, wonderfully often, using that as a tool with which you can beat your audience over their own heads. Directors like Park and Bong and Kim make you feel a certain way and then show you how you feel so that you recoil from your own reflection.

So. I Saw the Devil is about you. You are the devil. Nice to meet you.

In this film, a young bride is dismembered by a serial killer — Choi Min-sik, of Oldboy fame, playing Kyung-chul. The woman’s husband (Lee Byung-hun as Soo-hyun), a secret service agent, vows revenge. With the help of his police squad chief father-in-law, Soo-hyun gets a list of suspects and proceeds to make Charles Bronson look like Charley Brown. There is a bit of the ultra-violence, all of it staged by Kim and filmed by cinematographer Lee Mo-gae in itchingly beautiful sequences. 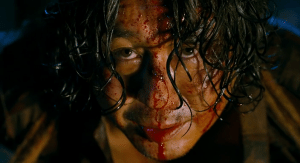 It looks wonderful. The way the camera moves, the richness of the light and color, the exactness of the mise-en-scene (which is lingo for the arrangement of elements within the frame) all convey a luxuriating delight. In murder, in cannibalism, in rape. And that’s horrible.

Over two hours and twenty minutes, we watch Soo-hyun permanently rule out the wrong suspects and narrow in on his wife’s killer. Kyung-chul, a school bus driver, is in the process of raping a student when Soo-hyun languidly interrupts him. They battle spectacularly and Soo-hyun proves victorious. Instead of killing Kyung-chul, Soo-hyun breaks his wrist, shoves a tracking device down his throat, and lets him go. 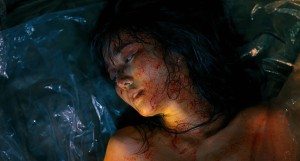 He does this so can continue to torment the man over the course of the remaining film.

If you noticed what happened to the schoolgirl, or cared, you win a cookie.

I Saw the Devil drags — or lures — you along with the wrathful Soo-hyun as he allows his psychopathic prey to continue to murder and rape so that he might, sometimes, interrupt him before the man is able to satisfy his violent urges. During each iteration, Soo-hyun does further physical damage to Kyung-chul and lets him go.

Director Kim Ji-won uses Park Hoo-jung’s script to play with victims and victimhood. They are the cat and you are the mouse. Their characters debate who has — or can — win their battle as the people on the edges get maimed, traumatized, and murdered. For that, I appreciate I Saw the Devil. It is self-aware. It is a film about the relishing of ugliness and what that means about us. 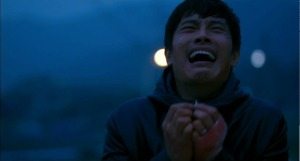 It is horrible and you should cry about it.

It is also a film about ugliness, and that I did not need. I do not enjoy watching others in pain. I do not need to see a man unable to stop eating raw human flesh to get the wink and the nod. So, aesthetically, I appreciate what Kim Ji-won is doing and the style with which he does it. Emotionally, I’d like him fuck off.

I do notice what happens to the victims. I do see how Soo-hyun perpetuates that which he despises and how, by watching I Saw the Devil, we are complicit. While I haven’t seen it, it sounds not dissimilar from what Michael Haneke did (twice) with Funny Games.

There is something about Korean films that makes blood-bathing of this type emotional and its viewers conflicted. In American films, it generally just ends up vulgar.

I suppose the devil is in the details, then.