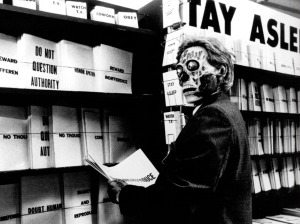 A shelf full of good advice

They Live (’88) is John Carpenter’s fuck you to the rich, Reaganite, yuppie culture of the ‘80s, delivered with all the grace and subtlety of, say, a professional wrestler trying to act. It stars professional wrestler Rowdy Roddy Piper as a working class bloke who happens upon a pair of sunglasses that reveal a black & white world run by hideous alien ghouls. Billboards and magazines and books are revealed to be emblazoned with simple impertives: OBEY, CONSUME, CONFORM, SURRENDER, WATCH TV, MARRY AND REPRODUCE, NO THOUGHT, STAY ASLEEP, SUBMIT, REWARD INDIFFERENCE, HONOR APATHY, and, on money, summing up Carpenter’s take on the times: THIS IS YOUR GOD.

The aliens are among us, their message is everywhere, and we ignore it. Worse, we do exactly as they want, without complaint, without question.

Piper, playing a man named Nada, eventually learns that the aliens are sucking up Earth’s resources, thus causing global warming, for their own use elsewhere. Once Earth is sucked dry, they’ll be on their way. Nada, rather than chew bubble gum, of which he is all out, fights back. 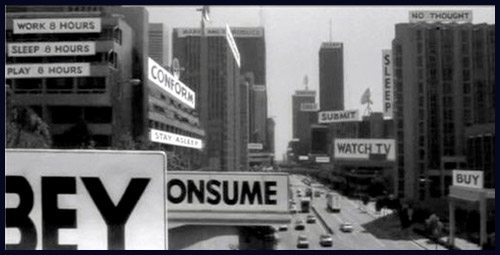 We see it every day

For its message, its attitude in delivering that message, and its B-movie entertainment value, They Live is all kinds of awesome. It’s also strangely flat, full of bad acting and worse dialogue, and, on the whole, feels undercooked. It’s not a masterpiece of the cinematic arts like The Thing, and for my money it’s no Escape From New York, either. But cinematic art is not what it’s going for. It’s got something else on its mind.

Also, it’s got a fight scene. An almost six minute fight scene. No superheroes throwing each other across cities, no laser swords, no mobs of wild, knife-wielding ruffians. Just two guys in an alley, beating the shit out of each other with their fists. For six minutes. In movie-time, six minutes isn’t an eternity. It’s millenia. You could watch the birth and death of an entire universe in six minutes. 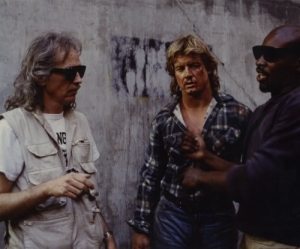 More concretely, you could take a bathroom break after it starts, watch a few more minutes of fighting, remember that you needed a beer, get that beer, stop off at the bathroom again, return to the sofa, write seventeen texts, take a phone call from your mom, get another beer, and make it back in time to see the end of the fight.

Which actually isn’t over yet, because there’s something like three or four fake endings. You think it’s over, but, no, there they go again.

It’s a fight so notably long and outrageous that in the famed “Cripple Fight” episode of South Park, the cripple fight between Timmy and Jimmy is a shot-for-shot recreation of They Live’s fight scene.

And what are they fighting over? Nada wants his best friend, Frank (Keith David, lending the movie some acting heft), to try on the sunglasses, that he too may see what’s what, alienwise. Frank says he doesn’t want to try them on. Nada asks again. Frank says no. And so—the fight. 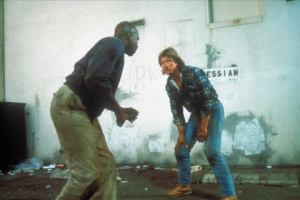 Now, there’s no reason not to love this fight as something ridiculous. On one level, the surface level, it knows damn well its ridiculous. So go ahead, drink your beers, smoke your pots, laugh your asses off. John Carpenter would want nothing less.

But the thing of it is, the absurd length of the fight is not a distraction, not an indulgence, not a “time-out” from the story, and above all, not merely a joke. It is the very core of the movie’s message.

Because Nada isn’t asking Frank to try on a pair of sunglasses. He’s asking him to wake up to what’s around him. The vision provided by the sunglasses is a metaphor for seeing the truth. And what’s got Carpenter so pissed off is that the truth is right in front of us. We’re staring at it, every day—look at those rich asshole politicians on the TV!—and we’re doing nothing about it! We see it, but we refuse to see it. We’re apathetic because apathy is easy.

The fight scene is a microcosm of the movie’s message. Just like Nada has to beat the hell out of Frank to force the sunglasses on him, Carpenter has to beat the audience over the head to force them on us. We fight back as hard as Frank. The fight’s so long it’s funny, we say, or what’s the big deal about sunglasses? or, what a kick-ass fight scene! Nice choreography! or, half getting it, I get it, it’s hard to make a guy to open his eyes to reality, but why make the fight so long?

The length is the point. The movie is no more subtle than the fight, and it’s not supposed to be. Snide reviewers snort derisively about the obviousness of the movie’s message, not understanding that the movie wasn’t made to comment with oblique artistry on the human condition, but as immediate, angry agitprop. Carpenter is pissed off! And he wants you to be too! And goddamn does it ever take some effort!

PUT ON THE FUCKING SUNGLASSES!

You would look very attractive in these glasses, my friend, allow me to place them on your face.

It’s not easy to make people see what they’ve programmed their minds to ignore. Once a mind is committed to closure, it’s next to impossible to open it up again.

That’s what the fight is about. If Frank said he didn’t want to put on some dumb pair of sunglasses, and Nada said, no, seriously, put them on, and Frank said, cut it out, wear your own sunglasses, and Nada said, I’ll beat you until you wear them, and Frank said, jesus, fine, relax, I’ll put your stupid glasses on, and then he did, and saw the aliens, what kind of impact would that have? What kind of meaning? It would undercut the allegory to the point of irrelevance.

And if the fight scene was typically brief? Then we’d really be scratching our heads. It wouldn’t play. It’d be a couple of knuckleheads poking at each other. Either there’s no fight, and the metaphor is lost, or it’s the longest fight in cinema history. It’s the only way the scene could work. It has to be the world’s biggest throwdown.

They Live‘s fight scene is hilarious. It’s beyond absurd. And it’s absolutely necessary.

Oh! There’s aliens everywhere! Why didn’t you just say so?