How long can you last? Did you wear the right shoes? Eat the right lunch? Are you with the right partner? Can you sleep standing up? Did you bribe the right judge? Are you prone to insanity? Are you desperate? How desperate? What will you do to win? And come to think of it—what is winning? Is winning winning? Or is winning losing? 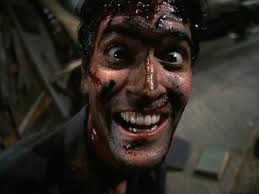 Can you endure as much as this man?

Tricky questions, but gosh, at least we’re not asking them of life. Heck no! We’re merely talking contests. You know, for prizes and stuff. Nothing relevent in there to the ultimate question of life, the universe, and everything, and your seemingly endless struggle to answer it while you run, ceaselessly, on the treadmill of existence, as eager as everyone else to collect your winnings. If only you could run just a tiny bit faster, you could beat these punks!

Endurance contests. That’s what this week’s Mind Control Double Feature is about. And I don’t mean playing Monopoly with your in-laws or watching every Michael Bay movie back to back. That’s child’s play. These movies are serious business. 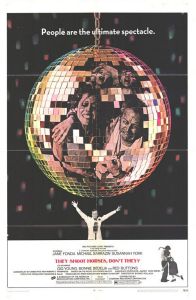 In those heady, drug-addled days of 1969, this is the sort of movie nominated for a boatload of Oscars. Today, you couldn’t pay a studio to make this movie. It’s based on a book of the same name written in the ‘30s about dance marathons, a nationwide fad during the Depression in which couples would dance for literally days on end, with short breaks, for a cash prize. Some of the marathons lasted as long as two months. Two months. Of continuous dancing. Needless to say, with people desperate for money, the situation was wide-open for charlatans running the shows to abuse their power.

Because in the end, that’s what the “contests” were: shows. Entertainment. The well-being of the contestants was a concern only insofar as it helped or hurt the take. And fairness? Not high on the list of concerns.

Gloria before the contest

They Shoot Horses, Don’t They? is set in ’32, at the height of the craze, at a dance marathon near L.A. The characters cover a wide range of types, of course, from the old sailor to the young couple, the wife pregnant, the wanna-be glamorous movie star, various seedy men, and the meanest, most cynical one of the bunch, Gloria, played venomously by Jane Fonda. It’s a great part and she plays it to the hilt, never once softening Gloria’s edges. 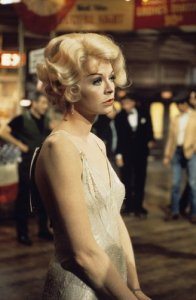 In terms of plot, there’s little to reveal. There are contestants. There is a dance marathon. There is a nefarious MC, Rocky (Gig Young). Trouble ensues, as does exhaustion. The metaphor of the movie isn’t exactly subtle—life! The biggest marathon going! And we’re all dancing!—but it’s not harped on, either. The movie just kind of rolls along in a slightly surreal fashion. It’s not flashy but it’s not boring, either. It’s funny and cynical and in every way a little bit odd.

There’s also some ‘60s style flashbacks and flashforwards edited into the proceedings, giving us a little background on Gloria’s dance partner, Robert (Michael Sarrazin), whose childhood included a horse, and whose future looks rather troubled, shall we say. 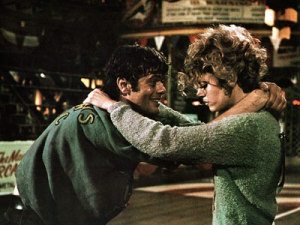 Our heroes late in the game

I guess you could say that any movie is a study of humans, but They Shoot Horses, Don’t They?, an early directorial effort by Sydney Pollack (and one of his best), studies them with a greater sense of the anthropological than most. Watching it I felt like I was being treated as a possibly alien creature who’d asked, “So, what’s it like being a human on Earth?”

What better way to find out than to push people to physical extremes and see how they react? Whatever they do, you know it’s going to be revealing. They Shoot Horses, Don’t They? presents a fictionalized version of an endurance contest, with an ending I’m not about to spoil. It’s surprising, it’s what it has to be, and in its own way, it’s very satisfying. 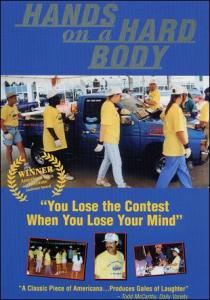 The Hands on a Hard Body contest was one begun by a car dealership in Texas in the ‘90s that continued until ’04, when a contestant, immediately after losing, bought a gun and shot himself. Why would a contestant disillusioned with an endurance contest kill himself? Frustration? Depression? The effects of sleep deprivation causing dangerous hallucinations? One can only guess. Maybe he just wanted to be put out of his misery. I mean, they shoot horses, don’t they?

Hands on a Hard Body, the movie, chronicles the contest held in ’95. It’s brilliantly simple. Twenty-four contestants place a hand each on a new truck. The last one touching the truck wins it. You have to stand. You can’t lean on the truck. And you can’t remove your hand for even a second. Short breaks every hour, longer breaks every six. The contest (the year of the movie, anyway) lasts for twenty-seven hours. And during it, people lose their minds. 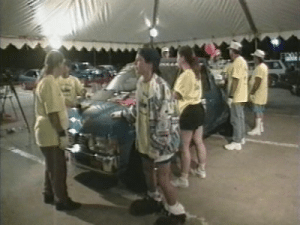 There it is. The whole contest. Don’t walk away…

It was directed by a young filmmaker, S.R. Bindler, who’d gone to film school but was definitely making it up as he went along, thus giving the movie a casual, unpolished feeling that fits right in with the cast of characters.

Most notable among them is Benny Perkins, in the contest for his second time after winning the inaugural competition in ’92. The man gives a good interview, that’s for sure, and he’s full of heady theories on the meaning of it all.

The other contestants are less philosophical, but at least as eager to get their hands on a new truck (and never take them off!).

It’s the simplicity of the contest that’s so compelling. What could be simpler than not taking your hand off a truck longer than some other guy? From that beginning, people are driven to the limits of physical and mental endurance. 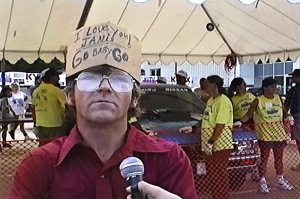 Like They Shoot Horses, we are once again faced with a silly little contest standing in for life and how we face it. Some are stoic. Some go mad. Some won’t shut up. Some wear bad shoes. And some bring nothing but candy bars.

This little doc is so compelling that somehow it’s never quite gone away. Last year a Broadway musical based on it ran for about a month (with music by guitarist/composer Trey Anastasio of Phish, no less). For years the movie was unavailable on anything but old VHS cassettes, but recently it’s been remastered for DVD and streaming, and should be readily available.

It takes no endurance to make it through this double feature. These are two entertaining flicks. But in light of this topic, for our next double feature, we will be proud to present: Pearl Harbor & The Hobbit Trilogy. Good luck, contestants!

2 responses on “Mind Control Double Feature #102: The Limits of Endurance”