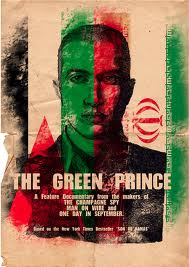 With all that’s going on in the world these days, I wasn’t enthusiastic about watching Nadav Schirman’s documentary, The Green Prince. It recounts and reconstructs the story of two men, Mosab Hassan Yousef and Gonen Ben Yitzhak. The first is the adult son of Hamas leader Sheikh Hassan Yousef. The second is the Israeli handler who turned Mosab into one of the most valuable informants his country has known.

Watching this smart, tightly wound documentary, I felt challenged to put the current situation in the Middle East out of my mind. Then I failed to do so. This may demonstrate a flaw in the filmmaking, or — as in Errol Morris’ The Unknown Known — it may be a reflection of the way the world actually is. 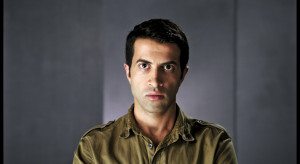 Schirman, in The Green Prince, has found a story worth telling. He also tells it well, using recovered footage, interviews, and first-person narration to introduce us to a world we might hope to never inhabit. Mosab is a young Palestinian. His loving father works at the upper echelons of Hamas — an organization you doubtlessly have your own impressions of — and, as a result, spends a good deal of his time in Israeli prisons. Angry at the world that so crudely constricts his community, Mosab illegally buys a gun, then attempts to smuggle it back into Occupied Palestine, where he hopes to use it for mayhem.

Being a teenager, Mosab does not realize that the Shin Bet — Israel’s secret service — will be watching him. He is arrested. One Shin Bet agent, Gonen Ben Yitzhak, uses indelicate means to ask Mosab to spy for Israel. Mosab agrees with no intention of following through. It is only after, in a prison run by Hamas, that he witnesses for himself just how indelicately people can ask questions, even — or especially — when those questions have no answers. Mosab, like a teenager, questions his father’s methods and morals. He becomes an Israeli spy, known, due to his extremely high level of access, as the Green Prince. 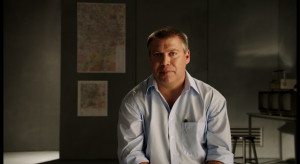 One half of this film is about the life of Mosab Hassan Yousef, son of a Hamas leader, betrayer of his people, inside-out savior assailant. He uses his privileged access to set up wanted men, to spare his father’s life, and to prevent act of terror. He does the kinds of things that his neighbors would kill him for, publicly. He does them because he feels they are correct.

And that is the other half of The Green Prince — the half that is not so much in the film, as in your head. Schirman follows Mosab as he loses the ability to persevere. He follows Gonen as he breaks rules to shelter Mosab and is subsequently excused from duty as handler. Mosab flees to America and extracts a complex ending from his insane story, one he publishes in a book on which this film is based.

You can watch The Green Prince and experience Mosab’s story. That is easy to do and worth your time. Less simple is to stand back from what’s being presented so that you might question it, indelicately. This is the true story of a young man convinced to betray intimate, cultural, familial trusts. It is the story of another man who takes his own risks to repay those favors. Seen from the eyes of Mosab and Gonen, one might call this story inspiring, or deem the ending happy. 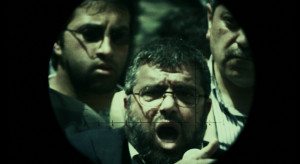 Gonen and Mosab live in our world, though. We cannot extract them from what happened and what continues to happen. The Green Prince starts and ends with a story that has no clear beginning and which threatens to go on forever. Encapsulated as it is, the story fascinates and moves. Without its artificial wrapper, the gleaning goes on.

I feel for Mosab Hassan Yousef. I feel for Gonen Ben Yitzhak. Watching this film, and the earlier documentary The Gatekeepers — about the men who led the Shin Bet, with which this would make an excellent double feature — I feel so many things for so many people. In that sense, The Green Prince is a complete success. The fact that I leave with no clear idea of how one might soothe the inhuman situations it presents as fait accompli makes the film less successful.

But the weight of the world can’t rest on one film. That weight’s too busy sitting on those of us who keep the world spinning.

4 responses on “The Green Prince; The Great Price”