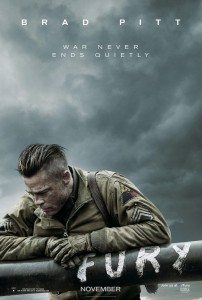 David Ayer has written and directed a film about a tank crew fighting the Nazis at the end of WWII. The movie is called Fury because someone is angry. That someone might as well be you.

In Fury — like in Young Ones, a film I’m going to review for you soon — the most interesting character is a machine. In this case, the tank, which is named ‘Fury’. Fury is a Sherman tank. It has ‘fury’ written on its main gun barrel. It has logs strapped to its side for extra protection. It has some guy’s face on the assistant driver’s seat.

Not a picture of some guy’s face: some guy’s face. Just the skin bit, as if someone scalped him while they weren’t really paying attention and nabbed the wrong part. 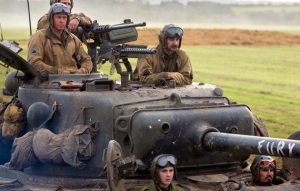 Fury is good tank. It has survived many a battle under the command of sergeant Wardaddy (Brad Pitt) and its colorful crew of unwashed, nicknamed men who all need a lesson or two in enunciation. We’ve got Shia LaBouef as ‘Bible’, Michael Peña as ‘Gordo’, Jon Bernthal as ‘Coon Ass’, and some guy’s face as a souvenir of the ugliness of war. Alas, Guy’s Face is not so good at operating the assistant driver’s machine gun and so he must be replaced.

Who could possibly step into this bloody, besmirched brotherhood of warriors? How about Logan Lerman, in the role of Norman, an army clerk who has somehow been shunted from a trip to typewriter land into one that ends in fury. Not the emotion ‘fury’, but the tank — since there seems little fury in Fury or any other emotion for that matter. 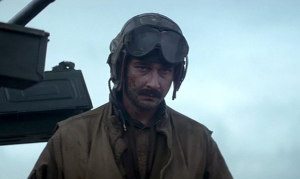 In the film Fury, David Ayer cribs from the Steven Spielberg school of combat recreation. War is indeed hell. Wardaddy starts us off by plunging his knife into a Nazi’s eye socket and things ramp up from there. Because while war is hell, it is also totally bitchin’ to transform some soldier’s head into a gooey, maroon splatter or lop someone off at the knees.

Oh, the humanity! Pass the cheese-doodles.

The lesson Ayer fails to learn from Spielberg, however, is the one where you hang onto your audience’s heartstrings. The performances in Fury are fine — even Shia LaBouef’s — but the characters aren’t ones you’ll miss, particularly Logan Lerman’s. This is a major problem as the drama in Fury comes in two parts: first is ‘will these men survive?’ and second is ‘will they accomplish their mission?’ Neither question nor answer has any impact if you don’t feel affection for these generic lugs, or even feel any empathy for them. 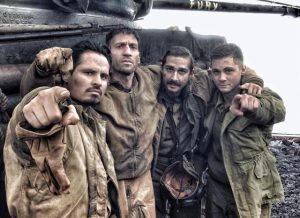 It was approximately three-quarters of the way through Fury that I realized that not only did I not know anything about Norman other than his name — which is Norman — and that he was trained as a clerk, but that I wouldn’t grow to know anything about Norman. Not through his actions. Not through exposition or dialogue. Nor through some title card that interrupts the final battle to state, “This is Norman. He is a young man thrown into the violence of martial conflict and he has found his manhood because, boy, this has been a big day for him.”

Yeah. Fury takes place in one day. In one day, Norman shows up too wussy to execute a captured Nazi, has — and I’m not kidding — a consummated love affair with the one unsullied young lady left alive in all of Europe, learns to enjoy killing men, and volunteers for certain death defending a crossroads against an SS Platoon with just one hobbled tank.

Why is defending this crossroads important? Well, Captain Waggoner (Jason Isaacs, hello to you) has used his impressive American accent to accentuate that it’s, gosh, really important, you guys, or like, a whole convoy of mechanics and clerks and supplies will be open to attack.

Which convoy is never seen, so just take our word for it that you should care about it and the people in it. 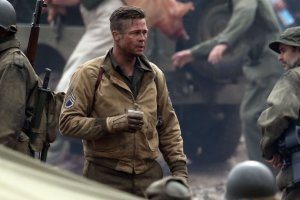 I’m Wardaddy Warbucks. My scowl will ensure the sun comes out tomorrow.

Norman’s actions throughout Fury do not connect to form a character. Like the tank — which is more interesting than Norman — this young man has lost his track, perhaps due to a land mine buried in Ayer’s script. He gets the bloodlust because there it is. He fucks young Emma before breakfast because he needs to care about her ten minutes later when she’s killed by a mortar. He volunteers to stay with Wardaddy and defend the crossroads because I have no fragment of an idea. He volunteers before Coon Ass, or Gordo, or Bible — the men who have fought alongside Wardaddy since Rommel — because that’s what war is, man.

It’s men, being brave in the face of death.

And then, in the end, maybe Norman surrenders or maybe he doesn’t and maybe he’s a hero or maybe he isn’t because war is chaotic and frightening and wasn’t that tank battle cool?

Yes. The tank battles were pretty cool. Those parts I enjoyed, mostly.

When Fury ends, Ayer’s camera cranes up to show the film’s main character — Fury, the tank — bludgeoned and mired in the crossroads, surrounded by bullet casings and bodies. The image is that of a martyr on the cross, suggesting that holding that patch of Germany for a few hours at the cost of these soldiers’ lives is akin to Jesus’ self-sacrifice in the name of peace on Earth.

I’m not Christian, but that got me. I finally connected with the film.