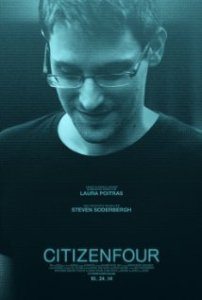 Laura Poitras’ new documentary, Citizenfour, puts you in a small Hong Kong hotel room with Edward Snowden. You are there, with him, as he explains to Poitras and Guardian reporter Glenn Greewald — for the first time — who he is and what he has done.

That may not sound cinematic, but if so you’re forgetting: What Snowden has done is change the world. In Citizenfour, you watch that happen. You watch this soft spoken, average looking guy drop a rock that makes waves around the planet.

Citizenfour is not a matter of a documentarian effecting change through the medium of film — like Michael Moore tries to do — but rather of our direct access into intimate moments that still resound. In case you’ve been living in a cave, Edward Snowden was employed by Booz Allen Hamilton and placed as a senior contractor at the National Security Administration. Through his access there, he realized that the NSA was ravenously eroding the privacy of Americans and people around the world, without regard to the rule of law. The NSA was — and presumably still is — monitoring the phone calls, emails, web searches, text messages, and other person-to-person and computer-to-computer communications of anyone they damn well please, from Angela Merkel to your mom. They do this regardless of their targets’ involvement or lack thereof in anything that might seem untoward.

The NSA is subscribed to your Twitter feed, monitoring your Skype calls, and liking everything you do on Facebook.

Rather than keep quiet about what he learned, Snowden absconded from his NSA office with documents that prove government malfeasance. Through Greenwald and others, he went public, identifying himself as the source of the leak.

But you know all of that. It was big news and still should be. Because of the events captured in this film. 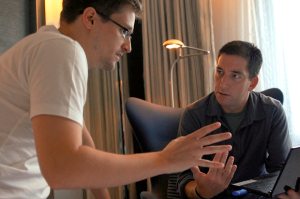 In Citizenfour, Laura Poitras invites you into a real-life spy novel and it’s almost precisely as John Le Carré would have scripted it. There is no derring-do with acrobatic, leather-clad assassins. There are, instead, nerdy guys and gals holed up in hotel rooms doing more damage than any dirty bomb could. Citizenfour is tense, insane, and impressively informative.

Would you like Edward Snowden to explain to you who he is, what he knows, and why he’s come forward? Well then: Citizenfour.

There is something else about the film, though. Something that makes it more than an intense refresher on recent history. That is luck — our good luck.

Like in The Act of Killing, a documentary I can’t say enough good things about, Citizenfour manages to be in the right place at the right time, catching something one by all rights should expect never to see. For every documentary about a sports team that manages to win the cup or about a cause célébre that comes to satisfying conclusion, there are uncountably more that follow the wrong candidate or find their expected drama fizzling.

And we wouldn’t know what Snowden dared to reveal to us, at continuing risk to his well-being and freedom.

As a film, Citizenfour is contained and effective. There are no splashy effects or animations or camera tricks. The real drama needs no exaggeration. It only needs your continued attention. Because the world isn’t done changing. 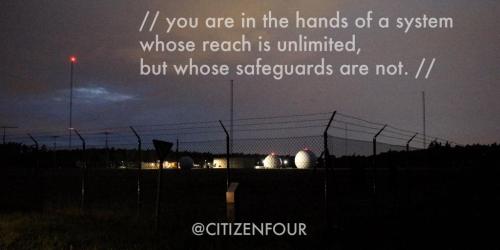 2 responses on “Citizenfour: Edward Snowden, as It Happens”