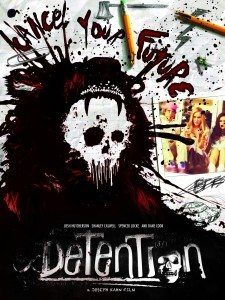 Detention: a film that made me feel older than Abe Lincoln’s eyelids. A film that pummeled me relentlessly with the message that I’m too square, too out of the loop, too decrepit to be worth explaining anything to. A film which I didn’t hate, so much as stare at, befuddled, like an octogenarian attempting to understand the point of being a mayor on Foursquare.

What is the point of being mayor on Foursquare?

Christ, I’m old. I’m ever older now that I’ve watched Detention — and more than the 95 minutes older one would expect; more like a decade older.

Detention is a ‘film’ by Joseph Kahn. It stars Shanley Caswell as Riley (both of those names are female, if you’re perplexed) and Josh “I’m the soapy milkshake in the Hunger Games films” Hutcherson as Clapton, plus a few faces you might recognize such as Dane Cook and no one else. Structurally, the what-ever-it-is plays like a game of exquisite corpse — that party game in which someone starts a drawing and passes it along to the next person who continues it without seeing what the first person drew. So sometimes Detention is a horror film, and other times it’s a comedy, and sometimes it’s a science-fiction movie about space bears, and then for a few minutes it’s a teen romance, or a porno, and look over there a badger with a hat! 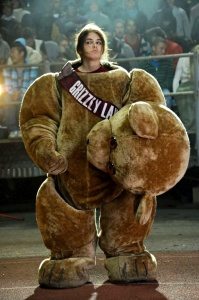 I suppose, if one concentrates hard, there is a discernible plot. Something to do with a masked killer trying to destroy the world by time traveling with your prom date. I think.

Taken in small doses, scene by scene, Detention unspools like a commercial for MTV or Axe Body Spray, only one written on the fly. I swear there is an entire sub-plot about a guy who has been turned into a Brundlefly by an asteroid and who only keeps his condition in check by wearing a television on his hand. This subplot, as far as I can tell, has absolutely nothing to do with the rest of the movie.

Kids these days, m’Iright? With their baggy pants and their texting and the televisions on their hands.

In many ways — many of them mentally deficient — Detention is an art film. It isn’t about story, or character, or narrative; it’s experiential. Perhaps it’s even interactive, in the way that VH1’s pop-up videos are interactive. Because this is a movie so incomprehensible and over-sugared that you might as well talk through the whole thing and make up your own jokes and, hell, be a character in it. You can watch Detention (if you’re under the age of 17) and fit right in, even if you’re high on whatever under-17-year-olds can get their hands on. Plutonium, probably.

Detention is so bizarre, it’s hard to offer up any judgement on it. When Stravinsky first performed The Rite of Spring, the audience went ballistic and tore up the theater, incensed because whatever they were hearing; it wasn’t music. It turns out people, after a time, grew to appreciate good old Igor Stravinsky. Perhaps they will also grow to appreciate this style of filmmaking and Joseph Kahn. 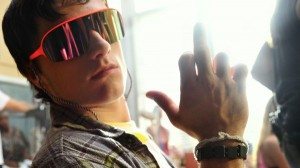 Or, perhaps, our children will, and we will sit around befuddled, wondering why they don’t pull their pants up and why they’re laughing at space bears and where they got all that plutonium.

Watching Detention made me feel positively elderly, and I’m the kind of fellow who adored Spring Breakers. I’m guessing the difference is that Spring Breakers exploded the world of the teenager and Detention roughly shoves you into it, like a nerd into a locker. It’s a film about input and overstimulation and how those things can result in interpretable outcomes, if only you’re spritely enough.

So, you better ask yourself punk: do you feel spritely?

6 responses on “Watching Detention Will Olden You”