I do not, honestly, have much time to write. 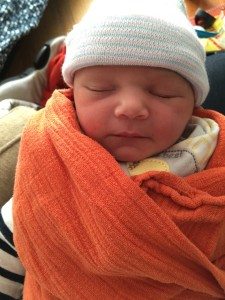 My baby is cuter than your baby.

This is because I am now father to four-day old Veda Eve.

But I wanted to share a few thoughts on a few films I saw, or didn’t see, as I crammed as much cinema into my skull as possible before the baby came.

Pride, a film by Matthew Warchus, starring a who’s-who of esteemed British acting talent — Bill Nighy, Imelda Staunton, Andrew Scott, etc. — is the sort of feel-good, we-shall-overcome picture that it’s easy to recommend. Yes. It is predictable, in the way historical-dramas and sports movies can be. Still, even if you happen to be familiar with the peculiarities of the 1984 British miners’ strike, which pitted the unionized miners of the U.K. against Margaret Thatcher, and with the peculiar side-story of the GLSM, Pride carries you along with grace and intelligence. 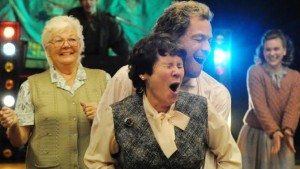 In brief, Pride follows a group of gay and lesbian activists who feel kinship with the persecuted miners — being as both groups get vilified by the government and brutalized by the police. They form Gays and Lesbians Support the Miners and raise money to support the cause but then struggle to find anyone willing to receive money from an outspokenly gay/lesbian organization.

1984, right? This is when the AIDS crisis was cruelly heaping fear and false justification for prejudice atop a community already suffering from a plague. Not the easiest time to be gay. Or lesbian. 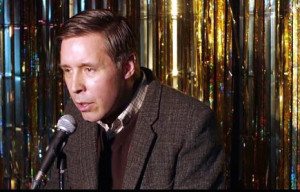 Standing up and doing right.

And that’s what Pride focuses on: the commonalities that exist among all men and women. Stephen Beresford’s script contains elegantly coaxed scenes of unexpected affinity. Paddy Considine’s Dai Donovan stands up to say the things we all need to hear. The fact that the film is a version of history is something that should give us hope. The fact that the US DVD cover was scrubbed of all mention of gays and lesbians is something that should give us heartburn.

I’m not sure which would be worse?

And then, the night before Veda joined us (a few days early), I felt the need to go to the movies despite there being extra nothing I wanted to see. When would I next get the chance to sit in the dark and soak up some cinema in an unbroken stretch? 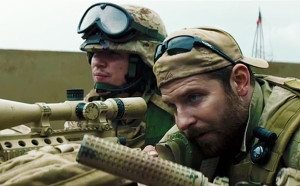 I hate to kill you, but it’s a living.

My choices were poor. Would it be American Sniper, which seemed exactly the sort of Oscar-bait tripe that people love from January through February and then promptly forget, a serious film about serious things that seriously avoids making any sort of objectionable political statement (or so I assume), the latest from Clint Eastwood, a man who has been significantly sprightlier in the past; or would it be Blackhat, a techo-thriller from squelchy director Michael Mann, a gent who knows how to stage a bank robbery but who makes me feel like I’m bathing my eyes in molasses? Blackhat stars whatshisname, Thor guy, not Chris Evans (who went to my high school, it turns out), but the other one.

Give me a break. I’ve got a newborn.

It looked, from the trailers, exceptionally stupid but at least energetically stupid.

So I chose stupid. And man did I get stupid.

Let’s all get stupid! 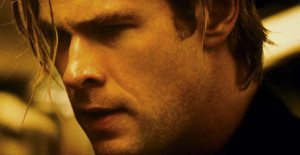 I went to your high school.

Blackhat starts with a nuclear reactor meltdown in China caused by a mysterious hacker. Within the first ten minutes, I had sat through not one, not two, but I think three (newborn;slack) digital delves into the circuit boards and wires that comprise the power plant’s compromised computer systems. As if anyone who’s seen a movie since Tron could possibly think of a more clichéd manner of communicating “we’re inside the computer.” And not just a quick in and out either, but prolonged explorations of serial buses and motherboards filled with glowing bits that blink to life, like an army of Pong rejects, to wreak havoc on clearly digital reactor cores.

Oh noes! There is an explosionary catastrophical! We must go inside the special prison where whatshisname (fine, I looked it up: Chris Hemsworth, who it turns out, did not go to my high school) is hacking into the commissary on an anally-secured cellphone (I’m guessing) to get free lollies for his death-row pals. Then he does a bunch of super butch push-ups because he’s hard, he is, that guy. And we’ll need him to save the world from Pong!

I walked out, crossed the hall, and sat down, the only one in the theater, for the 10:30 pm screening of Paddington.

And I laughed and laughed and laughed and knew exactly where the story was going and thought Nicole Kidman slightly too sexy for a kids’ film, but man, Sally Hawkins was excellent and Ben Whishaw was spot-on as the voice of the titular bear. It is just the sort of kids film you’d want to sit through with your kids, which, as luck would have it, I’ve now got one of.

Paddington is appropriately silly, absolutely charming, simple enough for small heads to follow, but artistically complex enough to inspire imaginations. Scenes drift into pseudo-Wes Anderson dollhouse land and take amusingly hallucinatory turns and Hugh Bonneville makes his transition from over-protective father to savior-of-the-day and the poor, wee bear (who talks, what of it?) from deepest, darkest Peru finds a home and a family in London (can you guess with whom?) and I left grinning and content and woke up the next morning to help my darling wife shepherd my darling daughter into this world.

And, somewhere in there, my dog got skunked, too.

It was a big week for the Evil Genius.

Love to you all.