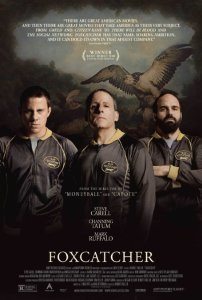 It starts with vintage footage of a fox hunt, complete with horses and bugles and excited children. These home movies presumably come from the halcyon days of the Philadelphia area DuPont estate, unironically named Foxcatcher.

Then these grainy black & white figures release their fox. The nimble creature bolts for what remains of his life, leaping hedges and darting in fear. All while the upper crust sports with his death.

Bennet Miller’s new film Foxcatcher isn’t about the pursuit of violently won trophies, but that’s only in as much as fleet-footed vulpines are concerned. Here, in the wintery light, the prey is cast in gold, as medals. It stalks just out of reach, as respect and affection. It squares off across the mat, as Olympic wrestlers, as kin. 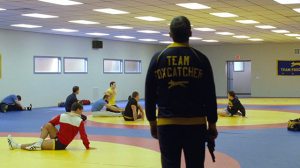 Foxcatcher is a sports film, but not in the way Bull Durham or Rocky or even Hoosiers is. Those sports films — and pretty much every sports film I can think of, excellent or dreadful — is about winning. Winning is the goal and the goal is achieved, whether or not that winning is simply a cypher for something else. Even in Hoosiers, in which Gene Hackman’s Norman Dale overcomes his troubled past and his gritty present, the film ends on a high.

We have overcome the odds and become champions, or close enough (as in Miller’s previous film, Moneyball). That rough road to glory is the distillation of pretty much every sports film ever made — except for Foxcatcher. Except for Raging Bull. 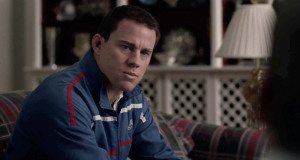 In Foxcatcher, the hunt begins and the hunt ends and the bad news is: you’re the fox.

Written by E. Max Frye and Dan Futterman, the film presents us with tight-lipped historical fiction. The characters and intersections of the story spring from fact. The details and dialogue do not. It goes as thus: in the late 1980s, champion wrestlers Mark and Dave Schultz make do. Dave, the elder brother, coaches and raises a family, pursuits to which he is suited. He also trains younger brother Mark, who barely scrapes by, as he is suited. Although both have won Olympic gold medals, Mark can’t slip out from Dave’s loving shadow. Mark’s medal seems smaller, tarnished. Kept out of the trophy case. 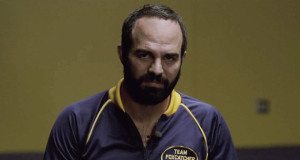 Dave, in Foxcatcher, being Mark Ruffalo and Mark being Channing Tatum.

Then comes Steve Carell as John Eleuthere DuPont. Carell is almost unrecognizable. And, above all, he is not recognizable as a comedian. His John DuPont comes to life as a broken Ming vase, sure of his worth but unable to convince anyone of the fact, particularly his arch mother (Vanessa Redgrave). Attempting to prove his value, DuPont aims to set his estate up as the official training grounds for the U.S. Olympic Wrestling Team. To that end he offers Mark everything he wants on a platter: respect, money, home, and — in his twisted way — family. Here is the man who will validate and adulate Mark. All he asks in return is fealty.

In Nightcrawler — a better film — Jake Gyllenhaal’s Lou Bloom says, “A friend is the gift you give yourself” as he takes what he needs, unabashed. But John DuPont lacks Bloom’s freedom from shame. He cannot admit his need. Shame is what burns in his belly and nests in his hair. Plus, DuPont wouldn’t know how to give a gift if his life depended on it, and it does. All he knows how to do is demand and remain in want. 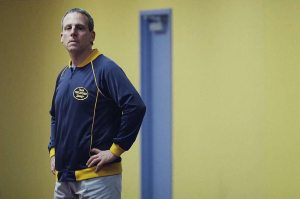 Foxcatcher is a tragedy. Winning is the goal, but there are no winners here. Do not go to see Foxcatcher and expect triumph and glory — unless your idea of glory is killing an animal that’s outmatched and terrified.

Unless you think killing something makes you its master.

In descending order of excellence, Tatum, Carell, and Ruffalo deliver awards-caliber performances. While some critics have been sniffy about the actors’ facial prosthetics and how they guide the acting, I don’t buy it. Watching the film, I quickly forgot I was witnessing fiction.

Miller’s direction lopes in long strides. It gasps after extended stretches of suffocating silence. Scenes unravel like hopes and dreams. The pace feels marathon and leaves you panting. Foxcatcher is a cold film, not in the way of winter, but in the way of defeat unexpected. Of defeat due to spite and self-destruction. Of the defeat we bestow upon ourselves because we are unaccustomed to being blameless.

Defeat, here, is the gift we give ourselves. And this defeat is bitter.

When you watch Foxcatcher, remember that Channing and Ruffalo are not wrestlers, but actors. That Carell is not the disappointing scion of corporate kings. The story is unwound and their performances keep the elements in some state of order. Appreciate them as much as you can.

Remember also that what you are watching actually happened, more or less. In films, at least since the ’70s, we normally receive neat endings, with clear messages: Practice hard and you can overcome the odds! Teamwork will win over arrogance!

Nothing is guaranteed here. Stories do not end. Try not to be the fox.

I am not sure what Foxcatcher aims to address, if anything at all. It may be a story about the corruption of power, or about the victory of our flaws over our dreams. I left feeling unenlightened but as if I had seen something fragile and inexplicable.

And that felt true to life.