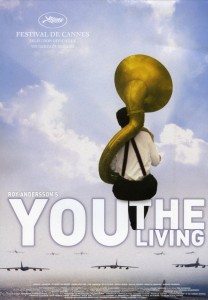 People are funny. Look at them walking their dogs, talking to themselves, staring at boxes of cereal in supermarkets, eating eggplants, falling down, missing elevators, chasing hats blown away in the wind. It’s the little things, they’re the best, they’re the funniest. It’s easy not to notice. You can’t notice too often, or you’d spend your life laughing at everything everyone ever did. But it’s good to notice sometimes. To remind ourselves that we’re a bunch of very silly monkeys.

You, The Living (Du levande) (’07), a Swedish movie by director Roy Andersson, concerns we, the living, in all our mundane hilarity. The title comes from a poem by Goethe, quoted at the beginning of the film, “Therefore, rejoice, you, the living, in your lovely warm bed, until Lethe’s cold wave wets your fleeing foot.” Lethe being the mythic Greek river of forgetfulness or oblivion. Drink from it, and your memories are washed away. 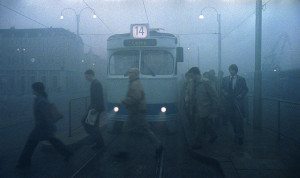 The train from Lethe, everybody off

Whatever life is, Andersson’s movie suggests, we might as well rejoice in it, before it vanishes. In You, The Living, life is slow and simple and bleak. And funny. Man, is it ever funny.

It consists of a series of vignettes, some connected by characters or music, others only by theme, that appear as tiny windows onto what it is to be alive, and human, and, therefore, by definition, absurd.

In one vignette an older plump man, alone in a room, plays a tape of a marching band, to which he bangs out the rhythm on a giant bass drum. Behind him, an open doorway. Pushed by an unseen hand, the door is shut. Why this should be as funny as it is, I don’t know, but it is. When you watch it, anyway. Describing it, it doesn’t sound like anything. Few of the vignettes would. 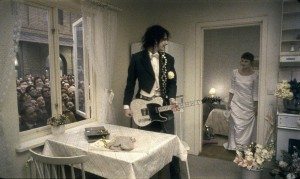 A number of characters address the camera to describe dreams they’ve had. We then see the dreams play out. In one, a man does ye olde tablecloth trick on a long table stacked with 200 year old china. The trick doesn’t work. He’s taken to court and sentenced to death by electric chair. As he’s strapped into the chair, squirming in panic, the executioner helpfully suggests he try to think about something else.

Another character, a young woman, dreams she marries the rock singer she’s obsessed with. They travel in a moving house. Out their windows, crowds of strangers congratulate them.

A man jogs, sweating profusely, on a treadmill. His young son calls his name. 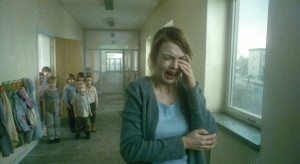 A woman, a gradeschool teacher, sobs before her class. Asked why she’s sad, she says her husband called her a hag.

I didn’t count them, but I’ve read there are 50 vignettes total in this 90 minute movie. You certainly won’t be bored by any of them. They’re too short. And weird. And funny. And sad, so very sad.

Toward the end, characters begin looking up into the sky. At what? The final shot shows us. I can’t say what, exactly, this lovely shot means, but it’s certainly ominous. 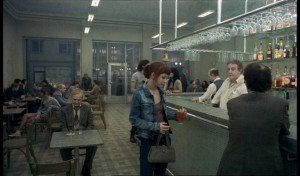 Tell us your dream, please

Andersson is a very precise director. Almost every scene is shot on a meticuously designed and lighted set. He doesn’t like shadows. His sets are simple, with few, carefully placed objects. Characters do a lot of standing or sitting. And watching.

The music is primarily old jazz. A number of the characters are musicians. Sometimes what begins as scene-setting music is sung along to, or played along to. Or as in one scene, three members of a jazz band play a song. Subtly, other intruments enter the mix, giving the scene a strange feeling of displacement.

Andersson made a similar film in ’00 called Songs From The Second Floor. With his new movie, A Pigeon Sat On A Branch Reflecting On Existence (’14, yet to be released in the U.S.), the three make a trilogy. I saw Songs From The Second Floor years ago, and remember it being rather dull, like it was trying too hard. Maybe I was in the wrong mood. Or maybe Andersson found his groove with You, The Living. In any case, I’ll be seeing A Pigeon as soon as possible.

You, The Living works by being consistently intriguing and funny. There’s no real dramatic arc, and certainly no characters to follow. It’s not paced to build to a climax. It just plays out, vignette after vignette, until it’s over. Like life. But funnier. 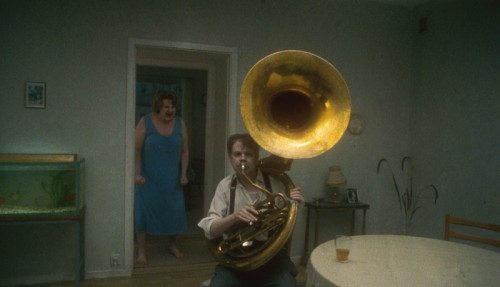