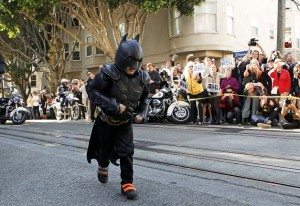 Did you watch any of the Batkid spectacular when it happened? You recall: that heart-warming news story in which a child with cancer wished he could be Batman’s sidekick and a healthy percentage of San Francisco responded to make his wish come true? (These events have already been compiled into a documentary and will soon be a feature film.)

It was pretty awesome but also a little creepy.

I recall watching the hordes of spectators swarming alongside the practical effects teams and the logistical support networks and then, shell-shocked in the middle, this wee tot — Miles Scott — being led around and placed in all these fantastical situations and instructed precisely what to do. The boy looked simultaneously like he was living a dream come true and like he’d far prefer to be sitting on a comfy sofa eating some Cheerios and watching someone else be Batkid. 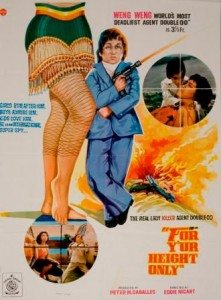 That’s about how the lead in the Indonesian comedy-action film For Y’ur Height Only, screening as part of this year’s Indie Fest, looked. The picture is essentially a James Bond movie starring Weng Weng — a two-foot, nine-inch tall gentleman.

Here is the joke: Weng Weng, due to his primordial dwarfism, is exceptionally short! And yet in this movie he plays an unstoppable super agent! Also, the ladies find him irresistible even though they are so much bigger than he is! Ha ha!

Despite his truncated height and near total lack of acting talent, Weng Weng made at least three films (The Impossible Kid; D’Wild Wild Weng), became a household name in Indonesia for a spell, and is now the subject of Andrew Leavold’s documentary, The Search for Weng Weng — also playing at Indie Fest. These events came to pass even though, I suspect, were he still alive today, Weng Weng would have been happier sitting on the couch with some Cheerios watching a double-feature of Batkid movies. 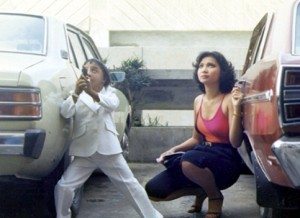 Because For Y’ur Height Only is most definitely an exploitation film. With it, we laugh not with Weng Weng, but at him — if there were any laughs to be had in its sorry mess, that is. Watching Weng Weng do his best (and I’m speaking of his lack of acting ability, not his dwarfism), the man looks like anyone else being held up for inspection. He looks unsure whether all this hoopla is for his benefit or whether everyone is helping themselves to some fun and he’s the unwitting straight-man.

As a film, For Y’ur Height Only pretty much sucks rocks. It nestles into that category of shoddy films that ought to depress you. The plot begins with the kidnapping of a scientist by the villainous Mr. Giant, a mastermind whose minions express a sincere, un-ironic desire to conquer the world in the name of evil. Opposing these dastards stands only Weng Weng as Agent 00, plus whichever attractive-woman-combination-by-happenstance-kung-fu-expert wanders into the neighborhood in a tight top. 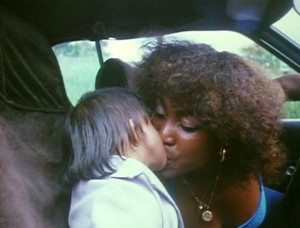 The kung-fu, most of which involves Weng Weng kicking people in the nuts, is abysmally phony. While the film’s star did study martial arts, he is — you may have noticed — kind of small. Imagine the front line of the Seattle Seahawks being attacked by a seal pup and you get the idea. It’s unpossible that no one picks up Agent 00 and throws him into the end zone for a spike and victory dance.

As lame as the kung-fu is, the dialogue is worse. It sounds cribbed from Bazooka Joe comics. The same twelve-second bits of score, themselves lifted from James Bond films, replay in a continuous loop over a parade of cheap sets, lame action sequences, and some of the most ill-conceived editing known to man.

The film leaps from one sequence to the next with all the grace of a yak being pushed into a vat of toffee pudding.

Also, the dubbing is terrible, the plot makes no sense, and it isn’t even slightly funny or engaging.

Weng Weng does what he can, behaving as suavely as is possible for a 2’9″ man in a white suit who’s hiding under a shrub. Henchman run out in gangs of three or four, all wearing their matching henchman long-sleeved t-shirts and red berets, to be mowed down by Agent 00 before they can even fire their weapons. This makes tons of sense and greatly adds to the atmosphere of “who fucking cares.”

Weng Weng’s spy agency supplies him with a raft of gadgets. The items are explained as such: “It does the thing. You know.” or “It has many uses.” Mr. Giant communicates with his cronies via a make-up mirror guarded by two militants with submachine guns; the big boss appears in the glass as a series of dim bulbs. 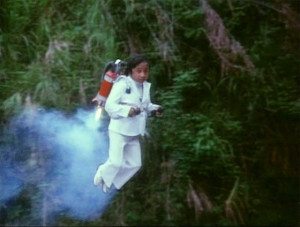 Weng Weng perseveres, however, his fighting style mostly a blend of hiding behind things and sliding along the floor like Tom Cruise in his underpants in Risky Business, only more like the underpants than like Tom Cruise.

I am sorry Weng Weng (Ernesto de la Cruz, if you ask his mom), to compare you to underpants. If this film and others like it brought you joy and fame and fortune, then I am glad they exist. Since you died in poverty, however, I feel less critical for wishing you had secured better for yourself. You were short, and your life was short, but I find nothing funny about either of those things.