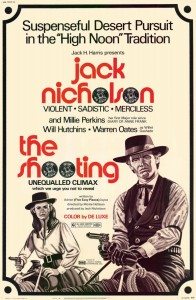 If Jim Jarmusch’s Dead Man (’95) is the apotheosis of the “acid western” genre, Monte Hellman’s The Shooting (’66) is its first incarnation. Acid westerns being those infused with a ‘60s counterculture spirit and a vision of America opposite that of the traditional western, where westward expansion is heroic and noble. In acid westerns, westward expansion represents the spread of death and decay. Gunplay is the opposite of glamorous. Good guys are bad guys, bad guys are good guys, and stories rather than resolving plunge ever deeper into existential doom and confusion.

It’s no wonder the term “acid western” fits Dead Man so well. Essayist Jonathan Rosenbaum invented the term to describe it, singling out Hellman’s work and the scripts and stories of Rudy Wurlitzer as having originated the genre. I haven’t read Wurlitzer’s never-filmed screenplay, Zebulon, but Dead Man is said to owe it a large debt. Wurlitzer’s Walker, a little seen, Alex Cox-directed acid western from ’87, is another classic of the genre. Others we might include are Jodorowsky’s El Topo (’70), Kelly Reichardt’s Meek’s Cutoff (’10), and a movie I’m presently kicking myself for never having seen (yet), Zachariah (’71), starring Don Johnson and based somehow on Herman Hesse’s Siddhartha. (Also a perfect fit? The never filmed — but oft attempted — Richard Brautigan novel, The Hawkline Monster.) 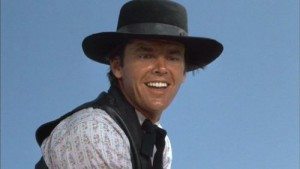 Jack as the mystery man in The Shooting

Hellman shot The Shooting back to back with another western, Ride In The Whirlwind, over six weeks in ’65. The movies use many of the same actors and locations. They both tell simple, brief stories, with characters we never come to know, whose fates are as mysterious as their pasts.

Carol Eastman (using her pseudonym Adrien Joyce) wrote The Shooting. Eastman would go on to write only a handful of other films, including one of my favorites, Five Easy Pieces (’70), and the rather unbearable The Fortune (’75), both of which star Jack Nicholson. Five Easy Pieces shot Nicholson to leading man fame. The Fortune, luckily, didn’t end his career.

Nicholson stars in and co-produced (with Hellman, a terrible decision, said Hellman later, with Nicholson pestering him about the budget nonstop) both The Shooting and Ride In The Whirlwind, and wrote the latter. 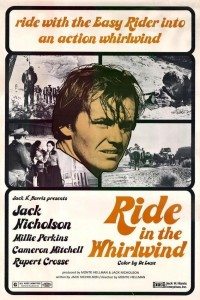 Of the two, Whirlwind seems to be considered less of an underground classic, due, I assume, to it being sensible and linear, with characters you almost, but not quite, give a fuck about. It’s got a forlorn vibe, and Hellman’s unique style, but calling it an acid western is a stretch. It’s a western, is all.

Nicholson plays Wes, a cowboy riding home to Texas with his two pals, Vern (Cameron Mitchell) and Otis (Tom Filer). They stop unwittingly at the hideout of a ruthless gang led by Blind Dick (Harry Dean Stanton). Dick lies unconvincingly about who they are, but our heroes don’t care. Nobody wants trouble, and everyone’s going to split come morning.

But over morning coffee a group of vigilante lawmen surround the place, and start shooting. They’re not about to differentiate between the criminals and the three cowboys in the wrong place at the wrong time. They burn the shack down, grab the survivors, and string ‘em up. 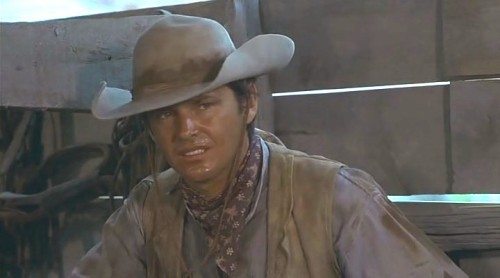 But Wes and one of his pals escapes. The lawmen give chase. And there’s your movie. Does everyone die? Does somebody escape? I’ll give this much away: it’s one or the other.

And what does the ending mean? Nothing too deep, I’d say. Ride In The Whirlwind isn’t out to be existential. It’s Nicholson’s version of a classic western set-up: innocent men wrongly persecuted, who do what they must to survive.

Waiting for the stagecoach

The way Hellman shoots the movie, one always feels at a distance from the action. Not physically distant. But emotionally. His characters are mostly blank slates. The movie does not invite one in. You observe it more than become involved in it.

It’s a style that marks all of Hellman’s movies, notably so for his masterpiece, Two-Lane Blacktop, in which the leads are like ghosts or dreams they’re so insubstantial. Wurlitzer wrote Two-Lane Blacktop. More than anyone, he understands how to make wide open existential emptiness play. Nicholson, as a writer, doesn’t, and he’s not trying to. It’s Hellman’s style that gives Whirlwind a feeling of otherness it wouldn’t otherwise possess.

Whether or not this makes it an enjoyable movie, you’ll have to decide for yourself. I found it very watchable, let’s say, though I won’t be in a hurry to revisit it. 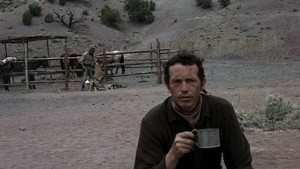 Warren enjoys a cup of joe

The Shooting, on the other hand, is a strange piece of work. Hellman threw out the first ten pages of Eastman’s script. A great move I wish modern filmmakers would employ more often. Hellman didn’t want boring introductory exposition. He only wanted story.

The story, though? There ain’t much of it. We open with Gashade (Warren Oates) riding home to his possibly simple-minded pal, Coley, who shows him the fresh grave of a friend of theirs. Seems an assassin came by and shot him as paypack for what Gashade’s brother, Coin, did to a little person or possibly a kid in town. What did Coin do? We never find out.

Next day arrives The Woman (Millie Perkins), a mysterious figure who wants to pay Gashade to lead her to some far-off town. Gashade and Coley saddle up, and off they go. 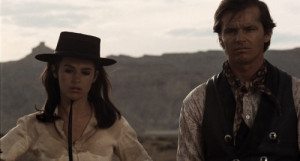 The Woman and the killer

Most of the dialogue in The Shooting is yelled. Which I found rather tiresome. Gashade doesn’t much like Coley, and The Woman doesn’t like either of them. We learn nothing about anyone, and nobody is any fun to be around.

All they do is ride and yell at each other, and then they notice a strange man following them. This turns out to be Billy Spear (Jack Nicholson), some kind of ominous, blackclad gunslinger and a friend of The Woman’s. The Woman won’t tell Gashade who he is or why he’s there or why they’re going where they’re going or what’s going to happen when they get there.

They never get there. They never get anywhere. They just wander, growing more desperate as their horses tire and die, until the climax, a shootout with Coin, which is presented I’d say rather strangely. In fact I wasn’t sure who it was, since Coin is also played by Warren Oates.

And then it’s over, and one might find one thinking to oneself, what the hell was that about? I still don’t know. For an 80 minute movie, it moves slow as molasses. To be expected when you know nothing about the characters, which characters all hate each other. 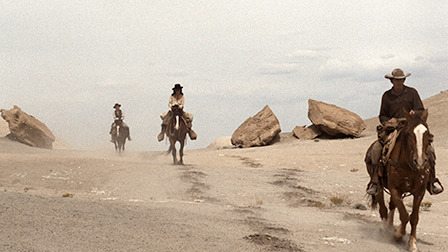 On the road to nowhere

In Two-Lane Blacktop, the Driver and the Mechanic are friends. They’re working together. Their silence makes sense. It feels right. Even if we don’t know anything about them, they do. It’s an implied bedrock. We may never see it, but we feel it supporting the emptiness above.

In The Shooting there is no bedrock of implied history, or friendship, or understanding. Which maybe that’s why the small number of people who love this movie love it. It’s about as blank as a movie can be. You’re free to discern your own meaning. Something about the lonely journey to inevitable death we’re all taking together? Or how confused and angry we stumble through a vast nothingness with people we’ll never understand only to find ourselves the object of a quest we didn’t know we were on? Well. If I put it that way…

I’m more fond than most of reaching the end of a movie and, owing to its weird and wholly unresolved nature, thinking, “Whoa. What the fuck was that?” But not this time. In the case of The Shooting, I just didn’t much care. 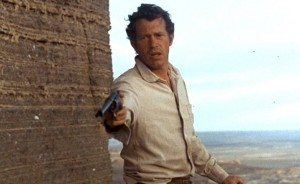 Hellman’s style, though, it’s his own. Even without thrilling to either movie, I liked watching his minimalist tendencies at play. Does Jarmusch owe these movies a debt for Dead Man? I also watched Dead Man recently (I can almost always say this of Dead Man), and while Jarmusch’s sensibilities in general stem no doubt from directors like Hellman and movies like Walker, Dead Man is his own thing, a refining of all the themes present in his earlier movies. Dead Man remains the best acid western (aided in no small part by the sparse, trippy, electric guitar score by Neil Young). It may well be the only acid western. One must remain at least a little skeptical of genres assigned to movies years after the fact.

And I mean now that I’m thinking about it, what difference, really, between the existential vibe of the ’60s/’70s acid westerns and other movies of the period? The style had nothing to do with westerns, in particular. It was the vibe of the times, as evident in Five Easy Pieces, Two-Lane Blacktop, Easy Rider, Shampoo, and so on, as any westerns. The more I think about it, the more useless “acid western” strikes me when describing anything other than Dead Man. Let’s just call The Shooting and Ride In The Whirlwind “Hellmanesque,” and be done with it. 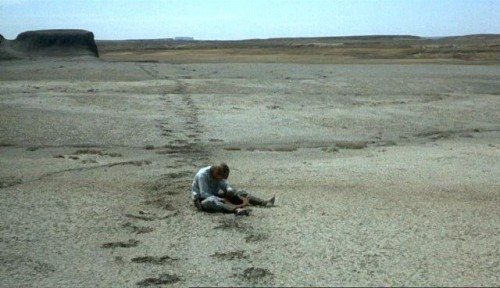 3 responses on “The Shooting & Ride In The Whirlwind: Monte Hellman’s Odd Pair of Westerns”