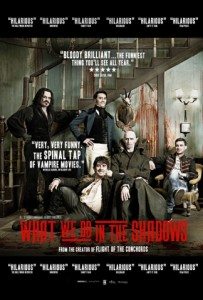 I forgot I’d heard about What We Do In The Shadows, the New Zealand based mock documentary written/directed by Jemaine Clement and Taika Waititi, a year ago, when it played Sundance. Took it long enough to emerge. But emerge it has, like an 8,000 year old vampire from its stony crypt. Who is named Petyr, and lives in the basement and looks likes Nosferatu. A nice guy, if not much for conversation, and frankly not very keen on housework.

His flatmates are Vladislav (Clement), a dark yet dashing chap from medeival times, Viago (Waititi), a bit of a German dandy from about 1700, and the youngster, at a mere 183 years old, Deacon (Jonathan Brugh). They’re vampires in Wellington. And they’ve let a documentary crew film them. Laid-back, deadpan Kiwi hilarity ensues. 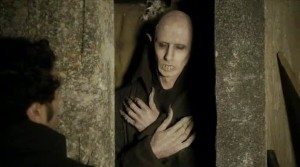 The set-up isn’t exactly genius, the faux-Real World thing, but if your movie is as funny as this one, it doesn’t matter in the least. These vampire pals are quite the charming fellows. You want to hang out and have some chips with them. Only, yeah, if you’re a vampire? Don’t eat the chips. Trust me.

The story, as much as there’s a story, centers on the botched killing/eating of a guy named Nick. In failing to die, he becomes a vampire, and wants to hang out with his new vampire buddies. Problem is, he’s kind of a dick. Plus he’s always bringing over his best mate, Stu, and insisting nobody eat him. Which is actually cool with the guys. They like Stu. They take him everywhere.

As anyone familiar with the Twilight series is aware, vampires aren’t keen on werewolves, and it’s no different here. The werewolf gang is led by Anton (Rhys Darby), who’s keen on maintaining on aura of respectability, despite constant vampiric taunting.

Vampire movies began boring me ages ago (unless they’re directed by Jim Jarmusch), so at least in my world it says something when I like one this much. Clement and Waititi know their vampire lore and have a great time playing around with it and throwing in endless jokes, some subtle, others highly dopey, but so pleasantly and genuinely dopey they’re hilarious.

I’d say more, but there’s no story here, no masterful cinematic technique to discuss. No, there are jokes, and I can’t tell you any more of those. In short, you want to see this. If you’re at all fond of Flight of The Conchords, or deadpan Kiwi humor in general, What We Do In The Shadows will slay you.

Slay you. Heh. Thank you. I’ll be here all week. (Note: all of the jokes in the movie are way better than that one.) 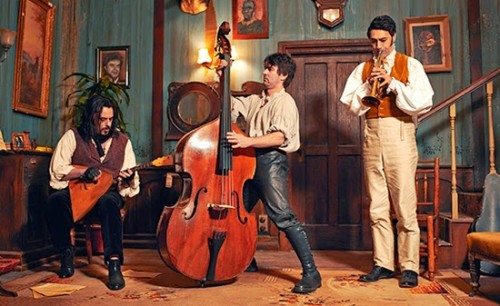 5 responses on “What We Do In The Shadows, or: Flight of The Kiwi Vampires”