If not here you go. It is indeed worth your time.

After watching this piece of unbridled lunacy, you face an important question: will settling in to watch fifteen times the nutsy-cuckooness of this trailer in the now-released 30-minute film be BETTER or NOT SO MUCH BETTER? 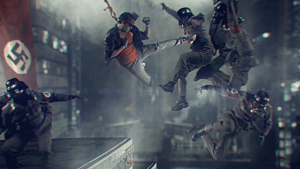 Well, I’ll tell you, for I have spent that valuable half of an hour on behalf of you, and Triceracop, and the multitudinous, poor, head-blasted minions of Kung Führer.

It is both better and not so much better.

There are some preposterous elements to Kung Fury, such as the come-to-life arcade game who feeds itself quarters stolen from parking meters so it may continue to wreak havoc. There is the titular kung fu cop who rampages through Nazi Germany like a side-scrolling character in Street Fighter. There are those bits in the trailer, which are then in the film, connected by every other damn thing that happens, which is all just as purposefully mentally deficient and jumbled together like a Katamari Damacy ball of nostalgic effluent that you’ve fished out of the bottom of the box in which you stuff all your miscellaneous electronics gear in case you ever need a VGA adapter or floppy disk protector.

Nor will you or do you need to watch Kung Fury. But you might watch it, and if you did, you would certainly feel something akin to amusement. Writer/Director/Kung Fury-Portrayer David Sandberg holds little back, kitchen sinking this 30-minute romp to within an inch of its existence. There is a story, even if it does have the coherence value of something your 5-year old nephew made up. There are actors, the best of whom is probably Triceracop, or maybe the giant god Thor—and I say this knowing that Kung Fury’s car, the Hoff9000, is indeed played by David Hasselhoff himself. 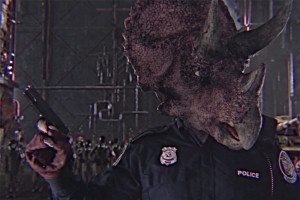 It is, in its ‘finished product’ state, sort of like an SNL skit turned film crossed with Detention and then left in the vegetable crisper for 23 years to slowly evolve into cultural Vegemite. In terms of DIY, effects-dependent film-making, it’s no Monsters, but it’s also no Sky Captain and the World of Tomorrow.

Kung Fury is, in the end, something. And it is something you can watch in just half an hour. Might as well get it over with so you understand all those laser-raptor jokes your colleagues are going to be throwing down on Monday.