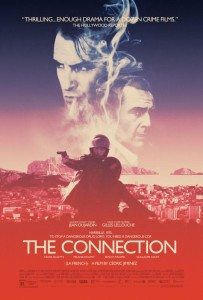 At the end of William Friedkin’s brilliant The French Connection, Popeye Doyle chases a mysterious Frenchman — Alain Charnier, deemed ‘Frog One’ — into the darkness, guns blazing. While that film was followed by a substantially less stellar sequel, Cédric Jimenez’s new release, The Connection (or Le French, elsewhere), takes the true story that inspired Friedkin’s original and plays it out to its bitter end from the other side, in Marseilles.

It is partly the story of who Frog One is at home. Against him, in the role of the pursuer, it presents a stark contrast to Gene Hackman’s wretched Popeye Doyle: Jean Dujardin as the charming magistrate Pierre Michele. The film unspools a sprawling, stylish tale of crime and punishment, one that could not feel less akin to The French Connection.

The Connection, now in American theaters thanks to Drafthouse Films, owes more to Martin Scorsese than to William Friedkin. As directed by Jimenez, the film feels like a less-vivid Goodfellas, and by that I mean it’s crisp, musically propelled, fast, flowing, and concerned with fact. Jean Dujardin does well as the incorruptible, driven real-life Pierre Michele and Gilles Lellouche out-steps him as Gatean “Tany” Zampa, the boss behind the Marseilles-based heroin trade and the basis for Alain Charnier. Lellouche starts generically tough and gets progressively better as the chips start to fall, and not in his favor, as you know they must.

This is ‘based on a true story’, after all.

So is The French Connection, but the films wouldn’t recognize each other at a family reunion. Friedkin’s film takes the story of a real narcotics investigation and uses it to expose universal truth about relentless pursuit. It is a beautifully grimy and brutally dark film. It has no heroes and no villains. It is based on a true story the way all fiction of note takes as its inspiration truth. The French Connection is a foolish film to try to match, or continue, as John Frankenheimer found with The French Connection II. 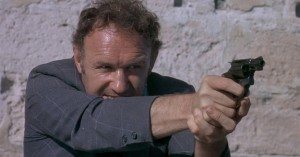 Popeye Doyle, when he isn’t disappearing into the dark.

In that sequel, Popeye Doyle goes to France to pursue Charnier (Fernando Rey), revisit the grit of the original, and track down a more traditional finale. Hackman is always a pleasure to watch, and it isn’t bad for a cop film, but that’s all it is. Frankenheimer has done far better (and far worse).

The Connection also isn’t bad for a cop film; frequently it’s quite good even. Taut scenes, fine acting, and dense, rich compositions make up for a screenplay that meanders. It’s a bit of a trade-off; for each scene that can’t wait to end, propelling you into the next sprint or confrontation, there are others that must have historical value as they certainly offer little to the plot. As The Connection reaches its midpoint, this lack of focus becomes increasingly apparent. Pierre Michele and Zampa have sparred aplenty and a vast array of subsidiary characters have swirled through scenes in clubs, on docks, and in chambers. Men have died, families have fractured, and the heroin keeps flowing fast.

But the thread of the story frays. Side forays into one betrayal provide some good action, but this sequence of scenes has sprung from mysterious origins and the subplot ends without adding much but length. Why have we been taken on this excursion? Is The Connection the story of Pierre Michele and his victory over Zampa’s cartel? Or is it the story of Zampa’s loss of control? Or is simply a slice of Marseilles history with an ample dose of histrionics thrown in?

For certainly, as stylish as The Connection is, there are moments that feel drenched in melodrama. For example: a long-suffering wife intuiting a gunshot from blocks away and running through the streets to find her husband dead along the cobblestones. Oh, the humanity! Oh, the psychic powers of spouses!

It’s a fine film, though, The Connection, with enough to satisfy thirst for thrills and to slake one’s curiosity in criminal history. Its flaws—those one often finds entwined with projects of historical fiction—aren’t close to fatal. If you can read subtitles fast enough, or speak French, this is a film I can recommend you see.

But I think you might be better off watching The French Connection again instead, and letting Popeye Doyle charge off into the black, willing to do whatever it takes. Don’t follow him; that’s the whole point. It is not important who Frog One is at home, or if he gets his comeuppance, or if he doesn’t.

What’s important is what makes us chase, not whom we capture.