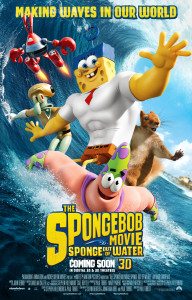 I really did not expect The SpongeBob Movie: Fish Out of Water to have a joke based on Kubrick’s The Shining in it, where twin rocket pops living in SpongeBob’s brain suggest, eerily, to Plankton that he come play with them; followed immediately by an Akira joke, in which fluffballs join together like a biologically insane Tetsuo but with a kitty-cat face; followed immediately by rainbow puke that calls you daddy.

I also, to be honest, did not expect to watch The SpongeBob Movie, or to feel afterwards like I had taken that rocket pop’s suggestion and ended up in a sugary, manic reality ruled by nothing whatsoever save whim and high-octane corn syrup.

I guess you’ve either seen SpongeBob Squarepants in some form or other — and thus know what I’m talking about — or you don’t and don’t. It is an experience I can neither recommend nor not recommend. It is an experience one must opt into of their own volition, like an ayahuasca trip in the jungles of Peru, or a slice of pizza from Domino’s. 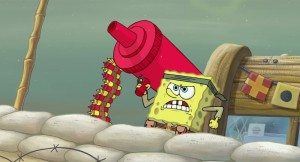 The film is insane, childish, and utter balderdash. Your kids will likely love it. You may also love it, depending on how much ayahuasca you’ve downed. I had downed none ayahuasca and thought, during and after: ‘ghuh?’

In this way, it’s like much alternative modern comedy — such as Tim and Eric Awesome Show, Great Job! or Too Many Cooks. Stuff happens. Its relevance to anything else is either clear, or deliberately unclear in a way that may cause your mental apparatus to malfunction, producing laughter bubbles.

So The SpongeBob Movie: Fish Out of Water may give you the bends.

As far as the story goes, Plankton (Mr. Lawrence) wants to steal the secret formula for Krabby Patties from Mr. Krab (Clancy Brown) and SpongeBob (Tom Kenny). In his attempt, the secret formula disappears, turning Bikini Bottom into an apocalyptic wasteland straight out of Mad Max — as in literally, with the fetish-type leathers and mohawks. SpongeBob must convince the diabolical Plankton to team up and retrieve the formula mumble mumble mumble space dolphins, conspiracy nutjobs, Antonio Banderas as a pirate.

For the last act, the characters are cetacean-magically transformed into 3D animated superheros who do battle among live-action humanity and exceptionally unfunny animated seagulls.

The cast is exactly as solid as they’ve been until now in the show, save new addition Antonio Banderas who — despite his success as Puss in Boots — seems all wrong playing a goofball pirate. The film looks swell, I suppose. It is more impressive as an expression of creativity than it is as an example of modern animation. The 3D segment is weird in a way that might be funny, or might be creepy, or might be trying too hard. I don’t really remember which, as I was hyperventilating by that point. 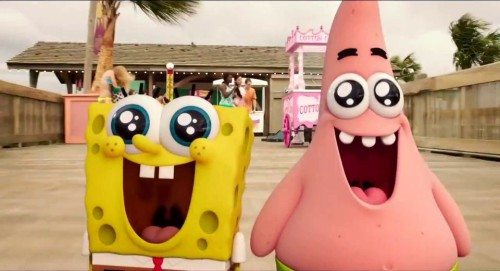 You will watch The SpongeBob Movie: Fish Out of Water (if you opt to, of your own volition) and be amazed at the unrelenting level of madness contained within. You will likely not go away thinking any deep thoughts or having learned an Important Lesson™, neither of which stand as points against the picture. It’s SpongeBob. If it made any sense, surely the end of the world would be nigh?

And maybe it is? If so, I can live with that (but not for long).

2 responses on “The SpongeBob Movie: Fish Out of Water Is Drugs for Kids”