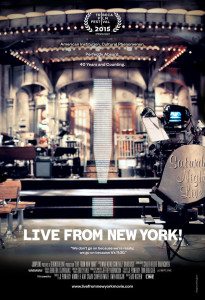 Toward the end of Live From New York!, a new doc about Saturday Night Live, there’s a breezy joke about how in the old days your parents used to screw while it was on, and now people watch it on their phones. That’s about as deeply as the movie goes into how the show has changed from an iconoclastic fuck you to tradition into a tired, toothless institution. Director Bao Nguyen deals briefly with the change, but in his hands it feels like a change for the better. Why? Because we love SNL! Yay!

We Love SNL! Yay! might as well be the tagline on the poster. Live From New York! is an improbably brief (82 min.) recap of the show’s entire forty year history. Clips are plentiful, but often no longer than a single line, and even more often without audio. We see fleeting frames of famous bits, famous characters, while interviewees chatter away on top of them. The clips aren’t there to be funny so much as to remind us of their existence. 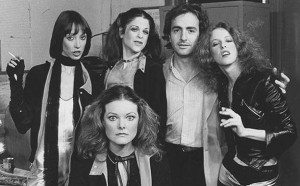 Lorne and the ladies in the old days

Lorne Michaels, writer Ann Beatts, Chevy Chase, Tina Fey and others chat about their time on the show, and everyone is very amiable and loving about it. This is not a movie examining SNL; it’s a movie celebrating it.

In part, that’s fine. It’s short, it’s funny here and there, and I guess it’s kind of breezily informative. It’s also very professionally made. It’s as much a product as the show itself. One might hope a history of this once unique show was more of a firecracker. But one wouldn’t expect it.

The movie begins as a chronological history, but thankfully veers away from such rigidity as it progresses, focusing instead on examining themes, prime among them the show’s political satire. Al Franken talks about how the show may have affected the outcome of Bush v. Gore, back when its political satire still had some bite left to it. Nowadays candidates regularly appear on the show to prove their mainstream credentials. In this writer’s humble opinion, political satire isn’t satire if it’s not pissing off the people it’s satirizing. 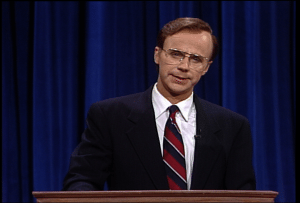 The change in the show, from challenging social norms to embracing them, would make a more compelling documentary. It meant something in the ‘70s when one had to stay up late on Saturday night to see what transgressive weirdness was going to play out. Does anyone even watch SNL on Saturday night anymore? If they watch it at all, it’s the week after, in clip form, on a phone, with their grandparents.

Live From New York! makes a big deal about the fabled “Dick In A Box” song being the first massive viral YouTube video. And sure, it’s worth a laugh. But all it is is a single dick joke repeated for four minutes.

You could pretty much sum up SNL since the mid-‘90s the same way: A single dick joke repeated for twenty years.

It’s not a bad doc, in terms of mildly entertaining fluff. But it leaves one asking, what’s the point? I mean, what’s this dang thing even doing here? Just what the hell is it?!