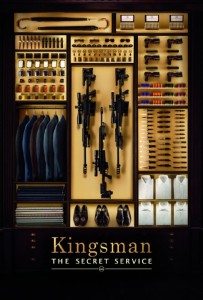 Matthew Vaughn’s Kingsman: The Secret Service is so clever that it’s not clever at all. It is a spy movie that cheekily demonstrates how much of a tool you are for going in for spy movies, such as the one you reasonably expect Kingsman to be.

The joke — which is obfuscated in plain sight — is that the paradigms reinforced by spy films (disconnected violence, misogyny, class constructs, etc) are garbage, and Vaughn lampoons them by exhibiting them to the extreme. That’s a lot of big words which mean Vaughn turns the spy malarkey up to eleven, so you might recognize the malarkey for malarkey.

Alas, this results in a spy film that’s gone all-in on malarkey in the vague hopes that you’d submerge your head and notice the clever bits buried beneath.

Did you? Me neither.

Scant few got Vaughn’s questionable joke or investigated its underpinnings. The rest didn’t have or want a clue; they wanted malarkey and got a ton of it! Check out that action scene!

I will cut you in half with my leg-swords, but you won’t bleed at all. It’s a joke, get it?

When I watched Kingsman, I was aware the filmmakers were making odd choices, but felt unmotivated to figure out to what end — I hadn’t turned on a film called Kingsman: The Secret Service to study semiotics. No one did. Then, the next morning, I read (or, honestly, skimmed) FILM CRIT HULK’s 16,000-word academic deconstruction of the film. That piece suggests that the film targets our lack of awareness and honesty concerning these types of films.

a) HULK’s probably right about Vaughn’s intention and cleverness; and

b) no matter how interesting what a person has to say is, if no one can digest what he or she is saying, what difference does it make?

So lets take a step back. 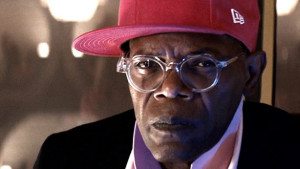 On the surface, Kingsman is a James Bond-esque action-adventure spy film. In it, a coterie of wealthy gentleman secret agents find their numbers depleted by one. They trial new recruits, including the film’s hero, Eggsy (Taron Egerton), a rough, poor, kid from the streets, while they simultaneously attempt to decipher and foil the plot of a psychopathic billionaire — Sam L. Jackson as Valentine.

If you’ve ever seen a James Bond film, you know the drill, from the dubiously weaponized bodyguard to the spy gadget geegaws to the disposable, uniformly dressed henchmen. From the lack of blood to the excesses of violence. From the unlikely achievements to the unlikelier characters.

And that’s how most critics reviewed it. They called its odder quirks bugs — not features. They didn’t think too hard about its politics or, if they did, they read it all wrong. Not being as clever as FILM CRIT HULK, they failed to see the secrets secured within.

And now we pray.

Kingsman is weird from the very beginning. It kicks off as a parody of itself, with a Rambo-esque assault on a Middle Eastern fortress that’s more video game than one would think sensible. Then Colin Firth‘s Harry Hart — our mentor character — appears and contradicts that tone in a scene built around sacrifice and cinema-style humanity, all to the strains of Dire Straits’ “Money for Nothing.”

I will not pretend as if I assimilated the semantic meaning Vaughn interweaves with this tale as naturally as HULK — go ahead and read his take if you’ve got a spare afternoon and strong eyes. I will also, however, not pretend that I have the tolerance to read or write 16,000-word essays, written in all caps, about a film that is essentially also a 16,000-word essay written in all caps (for this is the conceit of HULK’s online persona; he is the Hulk and must write in all caps even though he writes like Roland Barthes in a loquacious mood).

I mean, I’m wordy, but seriously. 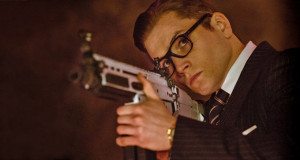 Manners make the man, but a gun helps too, it seems.

At best, Kingsman does one discernible thing — that being trot out silly spy fantasy tripe — in order to show us what kind of tripe spy stories are typically made of. There are other elements that, cleverly or too cleverly, abrade our conceptions of class and propriety.

And I loathed it.

No one, and I mean no one, goes to a spy movie to consider semiotics. The fact that Kingsman bluntly gives audiences the sort of meaningless violence and empty wish-fulfillment that they’ve been getting all along in spy movies, only now delivered intentionally and with eyebrow raised, does not make it a good movie or even necessarily clever. It makes it a dumb spy movie with a potentially interesting point that no one is likely to get. It makes it so clever it’s not clever at all.

Rapunzel, Rapunzel, let down your knickers.

Do James Bond movies include the same scenes, just less bluntly? Indeed. Because they are fantasies, and lad’s fantasies more than anything else. But I am no more interested in defending Bond than I am in watching a film that plays on our willingness to wallow in fantasy and then reprimands us for doing so. This is a movie that does extremely well that which it seemingly despises, which courts its victims with their own desires and then doesn’t have the courtesy to even tell them how little it respects them in the morning.

You can communicate obliquely; doing so has value, as that helps audiences reach conclusions in collaboration with you and each other. Saying something in a language your audience does not speak, or in an alienating way, may reveal genius but only at the expense of intelligence.

In Kingsman: The Secret Service manners make the man, which is rich, as the film has exceptionally poor manners.

Both Matthew Vaughn and FILM CRIT HULK have wisdom to share. It’s just a shame they haven’t yet figured out how to share it reliably. That for men so in tune with semiotics they’ve missed the key point of symbols: they must be readable. Both watching Kingsman: The Secret Service and reading HULK’s essay on it are masochistic endeavors that don’t impart half of what they intend.