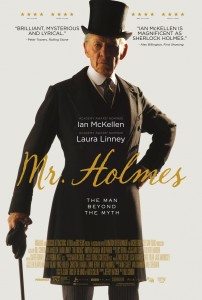 Mr. Holmes is a mystery, but not of the sort we expect when we hear the name Sherlock. Most often this fictional detective is one who applies his deductive genius to extrapolate answers from faint evidence. His persnickety personality — as realized by Benedict Cumberbatch, say — infuriates and intimidates and then, remarkably, logically, unspools the solutions we were too dense to decipher.

Go Sherlock, be that thing, do that stuff: dance monkey, dance!

None of that — or very little, at least — burbles to the top in Bill Condon’s film of Jeffery Hatcher’s script. Mitch Cullin’s book upon which Mr. Holmes is based, entitled A Slight Trick of the Mind, gives us a better clue of what sort of case we should expect herein: a quiet one, about identity. This is a missing persons case, and the missing person is Sherlock Holmes himself.

Not literally; there he is! It is more that our hero detective cannot locate himself within himself. 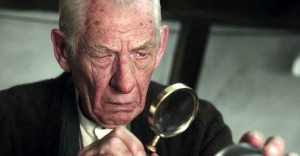 Played exceptionally by Ian McKellen as both an old man and an even older man, in Mr. Holmes Sherlock has long ago retired from investigating. He lives in the country, his health failing, tending to bees. His disgruntled housekeeper (Laura Linney) and her pre-teen son Roger (Milo Parker) are his only faint approximation of company. He is left, increasingly, without even his memory.

And so the plot swirls around senility. Who are we when we can’t remember, and who are we when our depictions — in Holmes’ case near omnipresent — contradict our sense of self? Under these challenging circumstances, the famed detective attempts to reconstruct the particulars of his final case — the one that led him to hang up his hat. 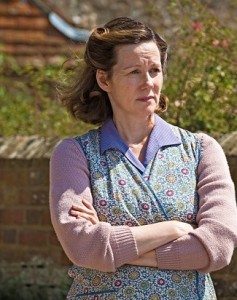 Sherlock knows something dreadful went wrong but can’t remember what. Watson’s published account rings false. Clues are long gone. All that remains are a few struggling memories and the fear of failing to be. If Sherlock Holmes cannot remember why he is or who he was, then truly he is missing.

The film plays out softly, relying heavily on McKellen’s subtle work and that of young Milo Parker, who doesn’t disappoint. Hatcher’s script dances back and forth through time, from the days of the original case, which Holmes tries to recreate through writing, to what plays as the present — 1947. Carter Burwell, whose work I normally enjoy, goes a bit plonky with the score this time, overcompensating for the delicacy of the film with flourishes that push too hard. But Mr. Holmes works in way that the introspective will enjoy.

Sherlock Holmes’ last case is the mystery of his last case. Who he is is who he remembers himself to be, even if that memory is falsely reinforced. Truth, in Mr. Holmes, is emotional, something Sherlock has never allowed himself to be.

One response on “Mr. Holmes: Declaring Yourself a Missing Person”