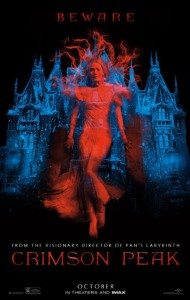 Ripe; that’s what Guillermo del Toro’s Crimson Peak is. Ripe like a red grapefruit, soggy with sticky juice. Ripe like a corpse stashed in the summer attic, thick with flies. Ripe like William Shatner, told to play it subtle but somehow, inexplicably, still stripping off his shirt and howling at the heavens.

Ripe with color and texture and Gothic romance that might as well be blood lust. Ripe.

Mia Wasikowska plays Edith, an independent woman of intelligence, teetering on the verge of her emotional awakening. It’s a part that pairs well with her turn in Park Chan-Wook’s Stoker. Edith lives with her father in Buffalo, New York, where she’s writing a story that has ghosts in it, but which isn’t a ghost story. 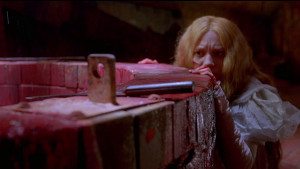 Get it? Or is Crimson Peak too subtle for you?

But If Crimson Peak is too subtle for you, perhaps you might wish to invest in some one-on-one time with a brain surgeon? For Crimson Peak is as subtle as Donald Trump after a quadruple habanero espresso.

Into this wound-tight society drops Sir Thomas Sharpe (Tom Hiddleston) and his sister, Lady Lucille (Jessica Chastain). They seek funding for their contraption what mines the blood-red clay that burbles beneath their ancestral manor back in Old Blighty. Edith’s pop (Jim Beaver) smells a rat, but Edith is too observant to notice anything — it’s all too subtle for her heightened senses. She sees Sir Thomas’ worn clothes and his fluid dance steps and, sure, ghosts — but notices not a jot of inner wretchedness. Edith does not even notice Sir Tom’s sister’s uncanny resemblance to an Edward Gorey illustration. 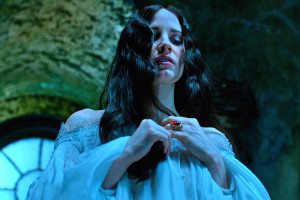 E is for Edith, murdered for money

F is for Charlie Hunnam, who isn’t funny. And who generally deserves an F for his complete lack of screen presence.

Here’s a hint. If you don’t have a lot of acting gusto in you, maybe decline a role in Guillermo del Toro’s ripe ride through spectrally-infused romance? For yes, this is a story that has ghosts in it, but which isn’t a ghost story. Those ghosts — bloody red and insubstantially smokey — crawl from tubs and slither down hallways and generally fail to respect Edith’s privacy. 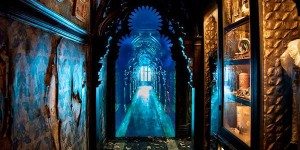 But then, marrying Sir Thomas despite the warning signs, it was her choice to live in Allerdale Hall, an ancestral home that lacks a roof, anything resembling pesticide, or a patch of wall unadorned by flocked wallpaper, intricate carvings, or peeling, crumbling, rotting texture. Allderdale Hall is like a smoker’s lung, if that smoker only smoked the wings of faeries.

See, Crimson Tide is ripe. It isn’t particularly scary, or deep, or even novel, but it is plenty ripe and quite enjoyable. It is an excuse to take your eyes out and show them where be monsters. Guillero del Toro has vision and zero reservations about sharing it with us all. He’s been scheming and waiting and plotting. His ideas, they are now ripe.

Not over ripe. Just deliciously ripe, hanging on the edge of rotten, at the apex of sweetness.

Watch Crimson Peak and delight in its insanely rich design. Bathe in its blood and let its cackles reverberate around your skull. Enjoy its lush monstrosity, as did I.

2 responses on “Crimson Peak a Boo”