If there’s one thing I really don’t want to do, it’s write another long post about how some summer movie is completely incoherent and stark naked when stripped of its endless digital effects.

But you want to hear what I thought of Pacific Rim, so I’ll do my best to focus on the positives. Here, now, for you, I’ve compiled 10 amazingly awesome and/or appreciably good things about Guillermo Del Toro’s latest extravaganza. 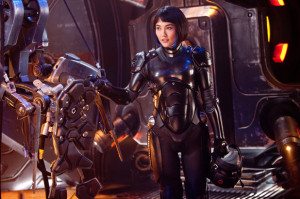 These pants are tight for safety reasons.

Let’s start with what, undoubtably, is the main highlight of Pacific Rim:

In the picture, Rinko Kikuchi has a very cute haircut. It looks very sassy and anime, with the tips dyed blue.

The concept underpinning Pacific Rim — that aliens travel through a wormhole into the Pacific Ocean and attack Earth — is equally cute. I’m sure you can imagine how a person like yourself might react to such an eventuality. Unfortunately you’ll have to, since Pacific Rim‘s prologue quickly bullet-points how the monsters arrive, how we fought them, how we won for a bit, and then how we began to lose — sort of like how Fellowship of the Ring starts with an entire war condensed into ten minutes. The rest of the film relates our last-ditch efforts to send the monsters back to the hell from whence they came.

These giant monsters — or kaiju — are heavily laden with symbolism. They symbolize merchandising potential. 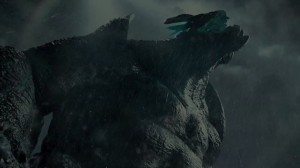 No, I’m laughing WITH you

All the stuff you were imagining about “holy crap there are huge fangy monsters coming out of the ocean and they’re really bad for property values” and “halp! i can’t find my dog Noodles and he’s wearing my wedding ring” is missing from the film. So is the stuff about what sort of person might volunteer to fight giant monsters; why you’d decide that the best way to defeat 20-story sharky things would be with giant robots that require two highly specialized people to drive them — people seemingly harder to find than giant robots; and why an alien invasion force would slowly ramp up in ferociousness — starting with one reasonably huge monster every six-months and building to a handful of totally huge monsters every day — over a period of TEN YEARS.

Maybe it’s because the Kaiju are just invasion dilettantes? They have an odd sense of humor?

Ask me no questions and I’ll shrug you no shoulders.

But I’m being nice today! Right! Nice, right, um. That Rinko Kikuchi. She sure has swell hair. 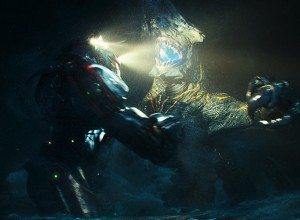 I cannot overemphasize the importance of flossing

I thought Pacific Rim was reasonably multi-ethnic. It also had a ton of strong roles for women, as long as you consider wandering through the background a strong role. There was a bulldog in it, too. We never found out why Charlie Hunnam’s lead character, Raleigh Becket, did anything he did, but we do get a few scenes with the bulldog. I’m pretty sure that’s five good things including the bulldog. What can I say? I am an animal lover.

Honestly, I’m trying. It is just hard because Pacific Rim was in no way a real film. If you saw the trailer, you know the drill. There are monsters. There are robots. Here comes Idris Elba to shake his fist at the apocalypse. Here is a bunch of nonsense that links those scenes together in way that almost but not quite survives the most cursory of investigations.

The aliens, or kaiju, or whatever; they are given a motivation. It is to conquer the Earth as slowly as possible. The humans, in stark contrast, have a motivation to save the Earth, or some of them do. Others think building a big wall around the Pacific Ocean is a good idea, so they do that.

Spoiler alert: the wall doesn’t hold. It also doesn’t exist in Hong Kong where much of the film takes place, obviously because they decided to build it in Alaska first. As you would. Save the bears!

There are a lot of battles between the robots and the monsters in Pacific Rim. They lack tension, as it is impossible to care about anyone or have any doubt as to any battle’s outcome. Del Toro cuts to shots inside the giant robots so you can see the mind-linked operators talking to each other and grunting, in case you forgot that there were people in this movie. Which would be easy to do. But these shots only serve to accentuate how removed we are from the battle. So, I suppose you could say that Pacific Rim was a calming influence. That’s a good thing, right? So I’m up to six now.

Wait. I have more nice things to say. There was one monster that looked like a giant hermit crab. I totally dig hermit crabs. And Charlie Hunnam was so good at acting like an actor that Sam Worthington better watch his back. That’s seven, as even I can’t count a favorable comparison to Sam Worthington as a compliment. 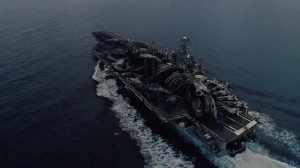 What we have here is a dead shark

Oh yeah, and at one point, when the Australian giant robot stalls out, the crew decides it’s a great idea to climb out of the robot and fire a flare gun at the towering monster that’s hanging about. They do this because their only other choice is waiting for help. It was — and I’m not lying — very funny. It may actually have been the dumbest thing that anyone has ever done on film, and I’ve seen some Rob Schneider movies.

Also, the guy who sat next to the Supreme Being laughed loudly at things like Ron Perlman losing his shoe. His shoe! He lost it! Do you get it? This man’s amusement brought me joy. We take it where we can find it, particularly during must-see summer films. I’m up to nine!

Pacific Rim isn’t scary, exciting, clever, engaging, amusing, arousing, or interesting. If I’m being totally honest with you, I have to admit that I enjoyed watching Man of Steel more. At least that film made me feel something, though those emotions were anger and disgust.

There is one other nice thing I have to say about Pacific Rim. I saw it for free. I recommend you see it for free, too.