Belgian director Jaco Van Dormael has a thing about lives not lived. His first movie, from ’91, Toto le héros (Toto The Hero), is about an old man convinced he was switched at birth with the kid across the street. He narrates the story of his real life and the one not lived, though both are dubiously fantastical. 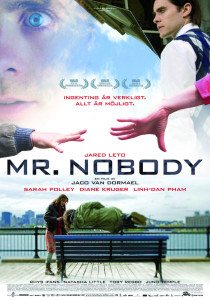 Long before Toto, in ’82, Dormael made a short film about a boy forced at a train station to choose which of his divorcing parents to live with. It’s this short he returned to as the basis for Mr. Nobody, a ’09 film in some parts of the world, ’10 in others, and ’13 in the U.S. of A., where it snuck by under the radar of almost everyone. Well. It snuck by my radar, anyhow. Maybe I was sleepy that day. Maybe, in another life, it was my favorite movie, and though I flew to Belgium to interview the director I was abducted and enslaved by smurfs before I could meet him and, to this day, in my alternate life, I work the underground smurf mines.

But so anyway, before starting in on what would be the six year process of making Mr. Nobody, two movies came out, both in ’98: Sliding Doors and Run Lola Run, both about a juncture in a character’s life where a simple choice changed their lives. Van Dormael figured he’d have to broaden his story. Or deepen it. Or, basically, just blow it the fuck up. 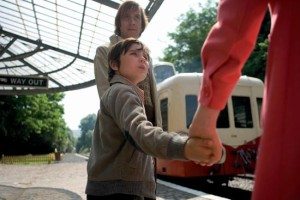 Mr. Nobody isn’t just about the choice of a child at a train station and the two possible live resulting. It begins there. Well, sort of. The first choice is at the station. The movie begins before the kid, Nemo Nobody, is born, in a strange, white no-place full of non-babies and a nice angel lady. I mean it doesn’t begin begin there, but such a sequence exists somewhere near the beginning. Needless to say, Mr. Nobody is a non-linear story.

It’s more or less narrated by a comically grumpy 118-year-old man living in the rather wildly shiny sci-fi future of 2092, a world where humans are essentially immortal. He’s the oldest mortal alive, and he’s just about to die. People want to know about his past. So he tells them, only his life is many lives, all contradictory, which drives the future folks nuts. 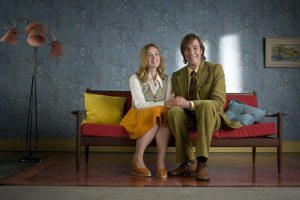 Actually, his first choice is to whom he’ll be born. He picks a pleasant enough couple. But events conspire to split them up, and Nemo, at a train station, his mom on the train, his dad on the platform, is told to pick whom he wants to live with. What a couple of swell parents. Nemo’s life splits apart, one life with mom, one with dad. But the movie doesn’t stop there. His life splits from each of those lives too, multiple times. He marries three different women. In some lives they die. In some lives he dies. In one he’s reunited with a childhood sweetheart only to lose her again. In another she’s a married woman he meets fleetingly in a train station. In another she’s married to his co-worker and they’ve never met.

And on and on and on. I’m not sure how Van Dormael pulled this off, but, mostly, he totally pulls this off. Nemo’s lives are impossibly intertwined. Rarely does any sequence in any life last more than a few scenes, and even then, different lives are regularly glimpsed in the interstices. In one life he’s a writer telling a science fiction story of a trip to Mars, in another he’s in a strange, argyle movie-set world. Or maybe that’s all of his lives? Or none of them? Or the old man’s dream world? Whatever it is, everyone dresses in argyle sweater vests and drives boring red cars.

Waking up in argyle world

It’s as though Billy Pilgrim, from Vonnegut’s Slaughterhouse 5, isn’t thanks to the Tralfamadorians merely living his own life unstuck in time, but every life he could have lived, all at once, all muddled up into one 118 year-long story.

The visuals and production design are something like a cross between Wes Anderson and Jean-Pierre Jeunet with a smidgen of Kubrick thrown in for good measure. Which is to say, this movie looks exceptionally neato. Nemo’s three major life threads, based on which of three women he’s with, are dominated by different color schemes. Blue for his sad life, yellow for his empty yet financially successful one, red for his romantic one. If nothing else, the visuals alone make the movie worth watching. They’re consistently interesting, even if, in the end, nothing very deep is pulled out of the proceedings. 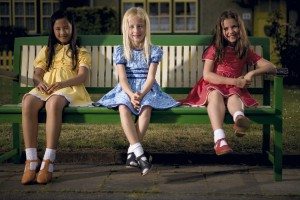 Which nothing really is. I mean it’s all a bit cloying if you dwell on it for long. The ultimate message being, life is wonderful, no matter what direction it takes. The boy, not knowing all the possibilities to come, is unable to make a choice. The old man, knowing every possible outcome of every choice, is unable to pick only one. The only choice, then, is to make no choice. Which is dramatized at the end by Nemo finding a third way out of his train problem.

But as for dwelling too long on the film’s aww-gee message, Van Domael doesn’t give you the time. He’s too busy zipping you around, showing you pretty picures, and, at his best, plunging you into the psychology of relationships. Mr. Nobody, in its complete, director’s cut version, is two and a half hours long, and it’s never boring. Mostly it’s just kinda warm and pleasant, even if Nemo is drowning or being shot by hit-men.

A trip to Mars

To further explode notions of infinite lives, Van Dormael throws in a story-line where Nemo is hosting a science documentary about quantum physics, because you can’t do many lives these days without pulling in the many worlds theory, and on top of that he makes perhaps excessive use of the butterfly theory. Excessive, but entertaining, and in a way very reminiscent of Amelie’s plunging into the cause and effect details of its characters, no matter how minor. So in Mr. Nobody, for example, a Brazilian man boiling an egg causes the freak summer rainstorm a year in the future whose fat droplets wash out the phone number of Nemo’s true love, Anna, with whom he’d just become reunited. 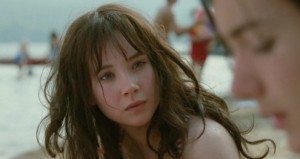 Speaking of Anna, her and Nemo’s teenage romance is alternately touching and hot and terribly sad. Juno Temple, as young Anna, does a nice job portraying a teenager’s notion of endless love. Meanwhile, in fake future Mars world, Anna turns up as a scientist studying time and the potential for the Big Crunch, when the universe stops expanding and folds in upon itself. Will time reverse when it happens? What would that be like? She’s got the date pegged to the minute in the year 2092. Anyone who lives that long has it made, she figures. Their life will start going backwards. Hm. Things are looking up for grumpy old man Nemo after all.

Mr. Nobody, by the way, is in English. Van Dormael speaks numerous languages, and said this idea was for some reason an English one. It stars Jared Leto as Nemo in his middle years and in old-man make-up (in which he looks almost exactly like old Dave Bowman at the end of 2001), Sarah Polley as Elise, one of Nemo’s three wives, Diane Krueger as the adult version of his childhood love, Anna, and various and sundry others. They’re all very good.

Mr. Nobody is an odd beast. In a way its a lot like a lot of other movies, with a Hollywood-ready message of “everything is awesome, ain’ it?” but scene for scene, it’s consistently engaging and unusual and worth seeking out.

One response on “The Many Lives of Mr. Nobody”