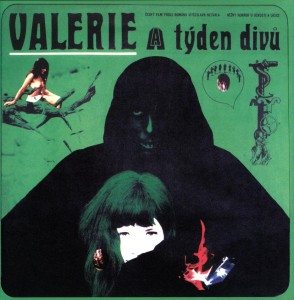 Based on the novel written by Czech author Vítezslav Nezval in ’35 (though unpublished until ’45), Valerie and Her Week of Wonders (Valerie tyden divu) is a 1970 surrealist freakshow of a movie directed by Jaromil Jireš, about a 13-year-old girl’s blossoming sexuality. More or less. It’s a bit like an eastern European, vampire-based Alice In Wonderland, with a lot more sex and rapey priests.

Valerie (Jaroslava Schallerová) is enamored of her earrings, which one might interpret as her nipples or her clitoris, depending on which shot you’re looking at. They’re stolen by an odd fellow named Orlík, who’s in the employ of the Constable, who by his black, hooded cloak, blue face, and nasty sharp teeth, one guesses is not a nice fellow. Sometimes he wears a creepy rat mask. Other times his face becomes that of a pleasant young man. And at still other times he turns into a polecat (basically a ferret, if you’re trying to picture one). 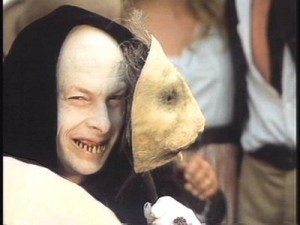 Such a nice man, this Constable

The Constable really wants those earrings. Or, possibly, he really wants Valerie, who by the way has just had her first period. She lives with her pasty-faced grandmother. Her parents died long ago—or did they? Grandma gets chummy with the Constable, who offers her her youth, if only she’ll, oh, something or other, and young she becomes, young and hot and having sex with various and sundry gentlemen. In fact she and the Constable used to be lovers, before he became a vampire.

Meanwhile, there’s this priest who lusts after Valerie by doing a bit of a snakedance and showing off his necklace made of teeth(?). She rebuffs him, so he hangs himself by the neck from a high window. But don’t worry. He winds up in the spider-webbed basement in a coffin with the Constable and grandma and seems all right later. Unless he doesn’t.

Valerie, meanwhile, learns she’s Orlík’s sister—unless actually she’s not—and that the Constable is his father. Unless really he’s her father. Or nobody’s father. And really Valerie’s parents are alive, or else her grandmother is her mother, though I think that’s pretty unlikely, and in truth it’s the Constable who killed Valerie’s parents and now wants to steal her house from her. 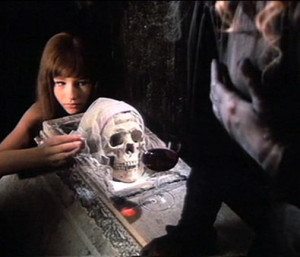 Valerie, having a moment

Orlík seems like the perfect farmboy for Valerie to lose her virginity to, aside from his maybe being her sister, but then again, maybe this fable isn’t about losing her virginity. Maybe it’s a simple allegory about budding sexuality. And polecats. On the other hand, Valerie does have a notable sexual experience with a woman, Hedvika, who’s recently been both married to an old, fat, wealthy landowner, and bitten by vampire grandma, in order to heal her (Hedvika’s) wounds. Because how else would you heal vampire nibblings? By swallowing Valerie’s magic pearl? I think not. Have I mentioned the magic pearl? I won’t spoil its secrets here.

Also, there are a lot of chickens everywhere, all the time. 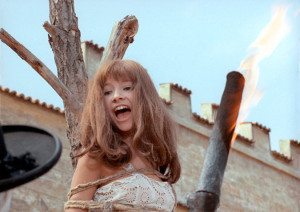 If you feel confused reading this, imagine how I must have felt watching it. “Story” is not the strong point of Valerie and Her Week of Wonders. It’s short, wisely so, because nothing exactly connects to anything else, except in however it is you decide to interpret events. Is Valerie really burned at the stake? Does the Constable end life as a skinned polecat? Is everybody a vampire? Is this what going through puberty is all about? You will have to decide this things on your own.

I found the movie rather lovely to watch, even if I wasn’t exactly on the edge of my seat wondering what would happen next. It’s shot beautifully in color with the almost square composition of old movies. Many scenes resemble paintings. If you’re a fan of ‘60s/’70s surrealist eastern European cinema, I’d tell you to watch it, but if you are, you probably already have. It’s like Daises or W.R.: Mysteries of The Organism. Or then again, maybe it’s more akin to Jodorowsky’s El Topo. Or more probably still, it’s akin to a ton of Czechoslovak New Wave movies I’ve yet to see.

It’s definitely bananas, so what the hell, check it out. 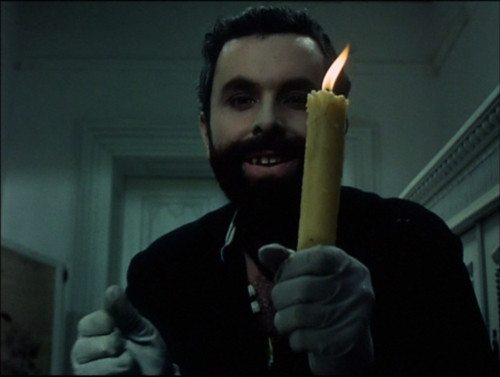 2 responses on “Valerie And Her Week of Wonders: Vampiric Czech Surrealism”